Investigations into a far-right terror plot in the Bundeswehr have led to another arrest, officials said. The soldier is suspected of working with Franco A. and compiling a "hit list" which included the justice minister. 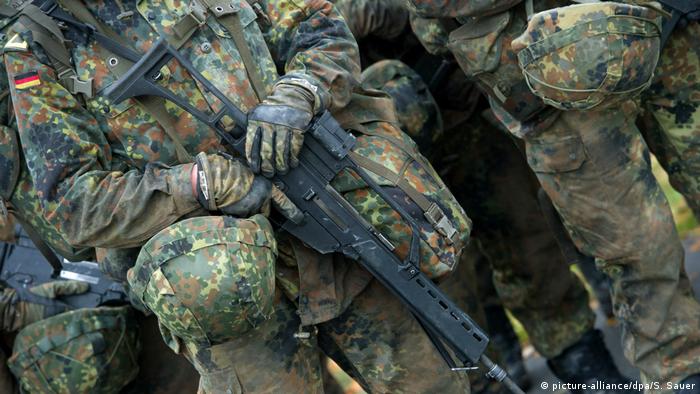 Investigators have detained another member of the German armed forces who is suspected of planning a "serious attack on national security," federal prosecutors in Karlsruhe confirmed on Tuesday. Officials later announced that they had secured a warrant against the accused.

Without the warrant, they would have been forced to release the 27-year-old Bundeswehr soldier identified as Maximilian T. after 48 hours.

Maximilian T. was detained near the southwestern German city of Kehl, according to German news magazine Der Spiegel, who first reported on the arrest.

"The accused is strongly suspected of planning a severe act of violence against the state out of a right-wing extremist conviction," the prosecutor's office said in a statement. The soldier is also believed to be an accomplice of the right-wing lieutenant Franco A., who was arrested at the end of April and had registered as a refugee to carry out xenophobic attacks. At the end of April, police also detained a 24-year-old student identified as Mathias F. in connection with the attack

Prosecutors believe that the Maximillian T. compiled a list of German officials that the group could attack.

"The suspects have classified their possible targets in various categories – there were categories from A to D," a spokeswoman for the Federal Prosecutors' office in Karlsruhe said.

The former German president, Joachim Gauck, and the current justice minister, Heiko Maas, were determined to be "A category" targets.

Spiegel also reported that the Maximilian T. was stationed at the same Franco-German brigade in Illkirch with Franco A. and that he helped cover for the lieutenant as he maintained his false identity as a Syrian refugee.

Security sources told Spiegel that online chats between Franco A., Mathias F., and Maximilian T. clearly showed their attitudes and readiness for violence.

One investigator told the news magazine that each member confirmed "they were ready to kill for their cause."

Authorities are still unsure exactly what the three men were planning to do. They did, however, uncover around 1,000 rounds of live ammunition from the Bundeswehr stashed at the home of Mathias F. Also, the trio allegedly bought a gun in Austria. In mid-January, Franco A, hid the weapon in a bathroom for the disabled in the Vienna airport, where it was later discovered by the Austrian police.

The ongoing affair has raised serious questions about the extent of right-wing sentiment within Germany's armed forces as well as how Germany's asylum procedures failed to detect that Franco A. was operating under a false identity as a Syrian refugee.

In an unrelated case, two members of the German Left party reported a Bundeswehr officier and AfD councilman in Cologne, Hendrik Rottmann, to the authorities for allegedly inciting hatred. Rottmann is suspected of posting a banned Nazi slogan "Germany, awake" on his Twitter profile. Rottmann told the newspaper Kölner Stadt-Anzeiger that he had no knowledge of the case.

Quick answers to Germany's mystery over an army officer's double life as a Syrian asylum-seeker are being demanded by the Interior and Defense ministries. Germany's refugee agency has come under the spotlight. (29.04.2017)

The German defense minister has reiterated her "entire responsibility" for everything in the armed forces, including a recent extreme right-wing terror scandal. But criticism of her crisis management continues to grow. (03.05.2017)