A decision by Germany's top court, that Berlin's involvement in European bailouts was legal, has led to gains on the markets. But as the euphoria subsides, questions are being raised about the future. 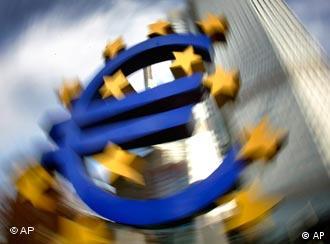 Wednesday's court decision, which found that Germany's contribution to European bailout funds was legal, buoyed stock markets around the world.

For investors, the main thing was that a nightmare scenario had been avoided; for had the Constitutional Court ruled the bailouts unlawful, serious questions would have been raised about Germany's contribution in the bailouts for Greece, Ireland and Portugal. The participation of Germany in the European Stability Fund could also have been placed in jeopardy.

Shortly after the Karlsruhe-based court handed down its ruling, German Chancellor Angela Merkel declared it a vindication of her government's actions.

"Sweeping all the problems under the carpet and talking about solidarity won't bring us stability," she told Germany's lower house of parliament, the Bundestag on Wednesday.

However, while the court ruled the government's participation in the financial bailouts legal, the presiding judge, Andreas Vosskuhle, added a caveat, that allowed the plaintiffs to claim victory as well.

"The government is obliged to get the approval of the parliamentary budgetary committee in cases of large expenditures," Judge Vosskuhle said.

The court went on to say that the Bundestag must continue to make such decisions "without external influences," whether they came from European Union institutions or other EU member states.

The ruling adds that parliament's role must not be allowed to degenerate into one of simple implementation, but instead, must remain the body that "autonomously decides on revenues and expenditures, including those related to international and European obligations." 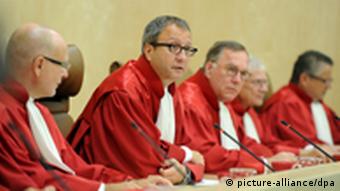 All this raises the question as to how this judgment will affect the ability of Europe's biggest economy to take part in any future bailouts. Among those who have looked at the decision with a critical eye are investment firms.

Michael Hewson at CMC Markets told the AFP news agency that while financial services providers welcomed the decision in the short term, but the long-term outlook is a different story.

"Of a bigger concern is that this ruling could well complicate matters further, as the court insisted that parliamentary approval would have to be given for future bailouts. If other EU countries adopt similar rules which seems likely given the political toxicity now surrounding bailouts amongst voters in Europe then any future bailouts could well get bogged down in red tape." Hewson said.

Piotr Kaczynski of the Center for European Policy Studies agrees that the ruling will make the process of getting any such measures adopted in the future more cumbersome, but he also argues that there may be an upside, which could balance things out over the long term.

"The cost for making things harder is that it's more legitimate. If you include the national parliament in these decisions then it should be more legitimate, he told the German Press Agency.

"Involvement of the parliament is a cushion vis-a-vis complaints about the process."

However, Kaczynski also warns that this added layer of decision-making doesn't automatically mean that the risk factor in any future bailout will be reduced.

"Of course you do not have access to all the information that is available in other states. It applies equally to the national government and to the national parliament. Whatever decisions are to be taken by the government are only based on partial truths. As such, this is the limitation."

Opinion: A victory for democracy

Germany's highest court has rejected a lawsuit against the country's contribution to the eurozone bailout fund, while demanding that parliament have a bigger say on future decisions - the right move, says Peter Stützle. (07.09.2011)

Germany's constitutional court has ruled that the country's contribution to the eurozone bailout fund was legal, but said parliament must have greater say in similar decisions in the future. Markets were up on the news. (07.09.2011)

The euro crisis could cause severe damage to the European project. More solidarity is necessary, EU lawmakers say. (07.09.2011)

Greek reactions to the German ruling