Germany and China have agreed to intensify cooperation on digitization of industrial processes, or Industry 4.0. That entails risks to German industry, since the two countries are destined to become competitors. 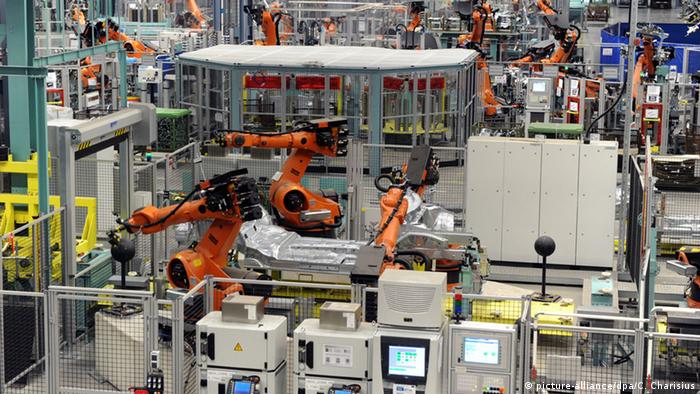 Germany's economy and energy minister, Vice Chancellor Sigmar Gabriel, was in Beijing on Tuesday to advance German-Chinese economic cooperation on the development of Industry 4.0 technologies in a meeting with China's minister for industry and information technologies, Wei Miao.

Ministers Gabriel and Miao signed an agreement promoting cooperation of German and Chinese firms in "intelligent manufacturing and digital networking of production processes," according to a statement from Germany's economics and energy ministry.

That will involve developing links between the German government's "Industry 4.0" strategic industrial development program and China's "Made in China 2025" initiative. 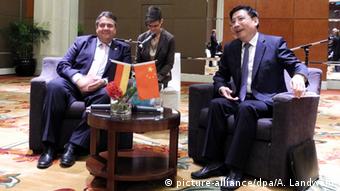 Some observers think cooperation with China in this area entails serious long-term risks for German industry because Germany and China's economies are both based on industrial production.

The two countries are expected to increasingly become direct competitors for global market share in many sectors, now that China's government has decided to add an increased focus on production innovation and quality, rather than quantity alone, in the country's vast industrial development effort.

"That suggests maybe Germany should consider approaching the US as its key partner on Industry 4.0, more than China," he added.

Growitsch said he supported cooperation between Germany and China on Industry 4.0 initiatives anyway, but "with due regard for the risks" as well as the opportunities.

Tuesday's ministerial agreement sets out "general bases of cooperation." Those include effective protection of intellectual property rights, voluntary decision of companies on whether or not to transfer technologies, joint German-Chinese development of norms and standards, data security for the firms involved and efforts to improve the framework conditions for entrepreneurs.

All five points taken together add up, in essence, to a German request that Chinese firms refrain from abusing cooperative projects by illegally copying German technologies and that China improve general business conditions for German enterprises doing business in China.

The question is what such an agreement of good intentions is really worth in the hurly-burly, mercantilist Chinese business world. The history of Chinese-European joint ventures doesn't provide much basis for believing that in future, IP rights will be respected and foreign firms consistently treated fairly, Growitsch suggested.

Since Germany is a major supplier of production technology and machines to China, German firms could see benefits if China works with Germany to adopt common norms and standards for the digitization and networking of industrial processes. That removes any roadblock that might otherwise stand in the way of Chinese factories continuing to buy - preferentially - German production equipment.

That's why Mercator Institute for China Studies (Merics), in a "China Monitor" report published in March 2015, accordingly suggested that German standards agencies should work with their Chinese counterparts to jointly develop Industry 4.0 standards - but in clear awareness of the risks.

"China has extremely ambitious plans to automate their factories and production processes," said Björn Conrad, a researcher at the Merics. "In general, German companies are well ahead of China's in factory automation and Industry 4.0 technologies at present. That makes it attractive for Chinese firms to buy German production equipment."

However, Conrad said, China has a strategy of fostering national champions in specific industries - and those companies are already playing in the premier league globally.

China could straightforwardly decide to develop additional national champions in other areas, including Industry 4.0 production systems, by inviting joint ventures with industry leaders from Germany or other countries - with a view to achieving "technology transfers" to designated Chinese companies.

"It's extremely difficult and very expensive for foreign industrial firms setting up in China to achieve data security," Conrad said. "Midsize companies can't afford it. It's not clear it's possible even for very large and deep-pocketed firms to prevent data or IP theft."

For mid-size German firms, the risks of losing their process data or IP advantage by setting up a factory in China would generally outweigh any temporary benefits in sales, Conrad warned. They'd soon be faced with Chinese competitors making the same products more cheaply.

Accordingly the Merics report recommended that German industry take measures to protect itself - including, when necessary, "excluding highly developed cutting-edge technologies from application in China." 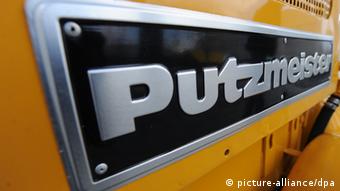 Sany, a Chinese company, bought leading German cement pump maker Putzmeister in 2012 - an example of China's strategy of building national champions by means of acquisitions of foreign technologies and companies

Whether Germany cooperates with China or the USA on development of Industry 4.0 technologies and standards, or with both, or tries going it alone in an effort to dominate global markets for networked production systems - there are risks in each approach, HWWI chief Growitsch said.

"Take Transrapid high-speed trains, for example," Growitsch said. "Germany developed them and went into a joint venture in China. Now China is building high-speed train on its own, and dominates world markets."

American leadership in digital technology also presents German industry with challenges. For example, Google has been developing driverless automobiles and could eventually decide to enter into the automobile production business and grab market share from Germany.

However, if Germany tried to go it alone in developing Industry 4.0 technologies, or limited its cooperative efforts to other European countries, it would face US and Asian competition on global markets - and there's no guarantee German norms and technologies would win out. US or Asian firms could end up dominating a sector Germany currently has a comparative advantage in.