German Chancellor Olaf Scholz meets US Speaker Nancy Pelosi in Berlin amid war | Germany | News and in-depth reporting from Berlin and beyond | DW | 16.09.2022 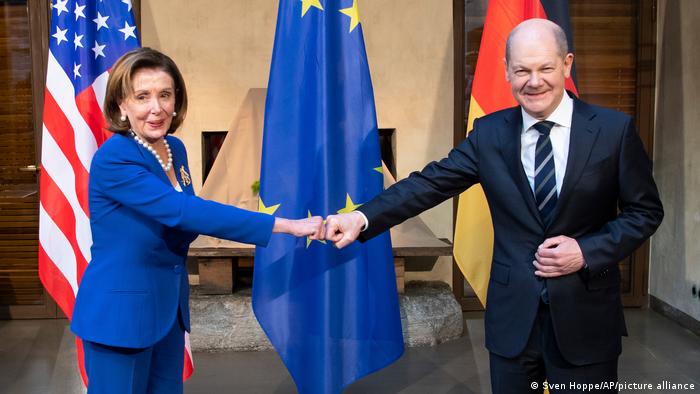 Don't say it too loudly, but Germany is on a war-like footing. It may not feel like it, because bombs aren't falling on German cities and German troops aren't fighting in other countries. Yet the fiscal response to the pandemic, climate change, and Russia's invasion of Ukraine has put Germany in a state of crisis.

Whether it's through efforts to save jobs, secure energy supply or rebuild its military, Germany is raising debt and splashing out billions in ways it has rarely done since World War II. As often happens in war, some goods have become scarce, and inflation is surging.

"It's hard, particularly in Germany, to say that word 'war,' but it's also important to say it and understand what it means," JD Bindenagel, a former senior US diplomat to Germany and now senior professor at Bonn University, told DW.

"The gas is hybrid warfare. The collateral damage is the inflation," he added, referring to Russia's throttling of its natural gas deliveries, on which Germany has long been dependent.

It's against this backdrop that US Speaker Nancy Pelosi meets with Chancellor Olaf Scholz in Berlin on Friday. They met once before in their current roles, just days before Russia's full-scale invasion of Ukraine in February.

Pelosi's main reason for the journey is a G7 meeting with parliamentary counterparts, and her encounter with the chancellor will be brief. But it is a chance for the two allies to size each other up ahead of a winter that is likely to be critical for both.

"We will persist until the guns are silent," Pelosi told reporters at a news conference in Berlin on Friday, alongside the leaders of the German, Ukrainian and European parliaments. "It requires substantial security support, humanitarian assistance, economic assistance — and sanctions, sanctions, sanctions that make sure that Russia feels the pain of this."

Pelosi touted the bipartisan support for Ukraine, which is no small feat in bitterly partisan Washington, D.C.

"This war must be won," she added, promising more money to come.

Energy prices are rising higher than many Germans' pockets are deep. Scholz and his three-party coalition are under immense domestic pressure to keep factories running and homes warm this winter, while also discouraging consumption and promoting renewable energy.

They have worked to frame the crisis as Germany's sacrifice for Ukraine's freedom. At the same time, officials have expressed grave concern of a public backlash once the cold sets in. A majority in Germany supports sanctions against Russia, according to the latest DeutschlandTREND poll, but that has dropped from at least two-thirds earlier this year to just over half this month.

"Pelosi will test for German resilience in face of the energy crisis. Scholz will reassure Pelosi that Germany is tough and will survive the winter," Bindenagel said.

Is Germany helping or hindering Ukraine?

Waiting on the other

In return, Scholz is likely to want to gauge Pelosi's longevity as the leader of the US House of Representatives. The role of speaker puts her second in line in presidential succession and, at least on paper, affords her equal stature to the president.

The House is chiefly responsible for spending, which means Pelosi plays a major role in approving military and other aid to Ukraine. So far, the US has committed more than $44 billion (€44 billion), according to the Kiel Institute, through early August. More than half of that has been military aid.

The 82-year-old career politician is thus a formidable representative of American policy and interests. However, US midterm elections are less than two months away and voters may send Pelosi back into the minority. While the Democrats could stage an upset, polls and history are tipped against them. More often than not, the party that starts out with control of both the White House and Congress ends up losing the latter during the next election cycle.

US policymaking may therefore get more hamstrung just as allies like Germany are waiting for a trans-Atlantic cue on how high to set the decibel level for supporting Ukraine, especially militarily.

"We've agreed with our partners that we will not make any unilateral German moves," German Defense Minister Christine Lambrecht told an audience in Berlin this week, referring to the government's ongoing resistance to delivering tanks to Ukraine. Following some criticism, the German government has agreed to send 50 Dingo armored infantry transport vehicles, and two more MARS II mobile rocket launchers.

Critics have blasted the position, especially amid Ukraine's recent successes against Russian forces on the battlefield. Milder voices, too, have expressed a degree of circumspection.

"Germany, I believe, wants to take more leadership, and we hope and expect it will do that," US Ambassador Amy Gutmann told public broadcaster ZDF last week. 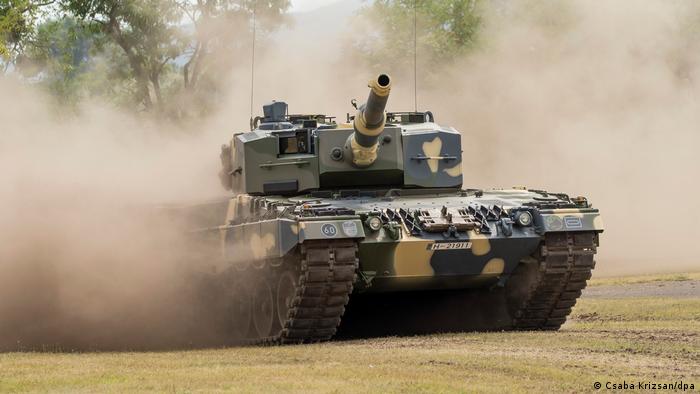 Many want to see German tanks sent to Ukraine

No light between allies

The US has also held back heavy weapons so far, and while German aid trails in both absolute and GDP terms, the Kiel Institute estimates that Germany has made good on more of its military commitment than the US.

According to a readout of a call with Russian President Vladimir Putin earlier this week, Scholz said a diplomatic solution is not possible without three preconditions: Russian troop withdrawal, recognition of Ukrainian sovereignty, and a restoration of its territorial integrity. That marks a small, but critical divergence from some voices in his party and other corners of the German political spectrum that have been pushing for a settlement.

It is also a different tone than the more hawkish position that aims to defeat Russia. Scholz's wording puts him on a path towards potentially helping end the war, though much depends on Ukraine's battlefield advances, Russia's response, and western signals.

Friday's meeting between Pelosi and Scholz is therefore another chance for the two allies to align their strategies and goals. An end to the war would be only the beginning of a new set of challenges, from figuring out what a relationship with Russia looks like thereafter, to coexisting with China, to making good on talk of boosting trans-Atlantic economic resilience.

"They don't want any light between us and them," Bindenagel, the retired diplomat, said of Germany's closeness to the US.

Their efforts to close any gaps come exactly as Russia, China, and their allies have met in Uzbekistan to do the same, at a meeting of the Shanghai Cooperation Organization, an eight-nation security alliance created as a counterweight to US influence.

Germany: Armed forces must be 'best-equipped in Europe,' Scholz says

Seven months since the Russian invasion of Ukraine began, repairing worn-out Western weapons is becoming increasingly important. The workshop for doing so is to be built on the Polish-Ukrainian border.