Opinion: Why Germany must send tanks to Ukraine — and fast

Ukraine's successful counteroffensive against Russian forces has rekindled the debate about tank shipments. Is it time for the West to rethink its choices? It is certainly time for a quick decision, says Miodrag Soric. 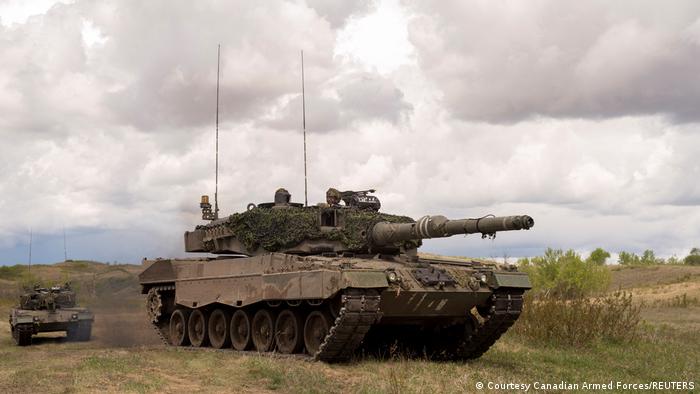 Russian troops were surprised by the Ukrainian army's recent success in eastern Ukraine — but so was the West, including the German government, which had hardly expected Ukrainian forces would advance so rapidly.

The alleged military superpower Russia, with its endless supply possibilities of guns, tanks and fighter planes, faced Ukrainian forces that have for months been pleading every day for weapons from the West to allow them to keep fighting.

Momentum on the battlefield

Now, once again and at short notice, the German government is being asked to send modern Leopard 2 tanks to Ukraine. Kyiv wants to use the momentum on the battlefield and beat back the Russian attackers as far as possible. Further territorial gains would be an important bargaining chip in negotiations with Moscow about a possible cease-fire.

Modern tanks for Kyiv, right away? As it has done so often in recent months when it came to supplying weapons to Ukraine, the German government is hesitant. Berlin appears torn. Members of the government promise that Germany will stand by Ukraine's side without any ifs, buts or ands. These same politicians duck when asked to state clearly whether or not Germany should supply the Leopard 2 tanks. Often there is a huge gap between rhetoric and practical action.

It is true that the chancellor and the Social Democratic Party (SPD) in particular are keeping a low profile while the Free Democrats (FDP) and the Greens are in favor of supplying Ukraine with heavy weapons, including modern Western tanks. Kyiv has little sympathy for the dispute within the German coalition government — it needs support now because fortunes on the battlefield can turn quickly. Whether German tanks will have the same deterrent effect on Russia's aggressors in a few months as they would in the coming weeks is anyone's guess.

Once again, German Chancellor Olaf Scholz is hanging back, saying he first wants to coordinate the delivery of Leopard 2 tanks in particular with the US, France and the UK and second, despite the arms deliveries to Kyiv, he does not want to completely break off talks with the Kremlin. Third, the German head of government fears Russia's President Vladimir Putin could use tactical nuclear weapons to prevent an imminent military defeat. The West would like to see the conflict end with a political solution that all parties — including Moscow — can live with.

Opportunity for the West

Rarely do wars turn out the way politicians imagine, a lesson Russian President Putin has learned the hard way these past months. Back in February he thought his so-called "special operation" would last a few days, at best weeks, handing him an overwhelming victory. It turns out he could hardly have better demonstrated to the world the Russian troops' military incompetence and poor morale.

Russia has no 'ready answer' to Ukraine gains

A military defeat would threaten his power. That is an opportunity for the West, not a threat. Putin does not tend to take irrational action. He respects opponents only when they stand up to him in force. He exploits weakness, including disunity in the West, to his advantage.

So the Western allies don't have weeks to agree on the delivery of modern tanks to Ukraine. They must move quickly, in a matter of days. Such a decision, another demonstration of unity in the West, would significantly increase Putin's willingness for serious negotiations.

War with NATO would be risky

Also, the West need not fear the use of nuclear weapons. These are threatening gestures by the Kremlin, more rhetoric than anything else.

Any use of nuclear weapons would accelerate Putin's end. China, his most important ally, would turn away simply because of the economic consequences. The same is true for the Russian people. They want to continue to believe in Putin's promise of a limited "special operation" that has little impact on their daily lives. Surveys show that Russians fear nothing more than a military confrontation with NATO. And that could hardly be ruled out if Russia were to resort to nuclear weapons.

India: Deadly avalanche hits in the Himalayas 1h ago