Her government's COVID-19 management is one of the topics Angela Merkel has been challenged on in parliament. But at what's set to be her last chancellor's Q&A she went out with more of a fizz than a bang. 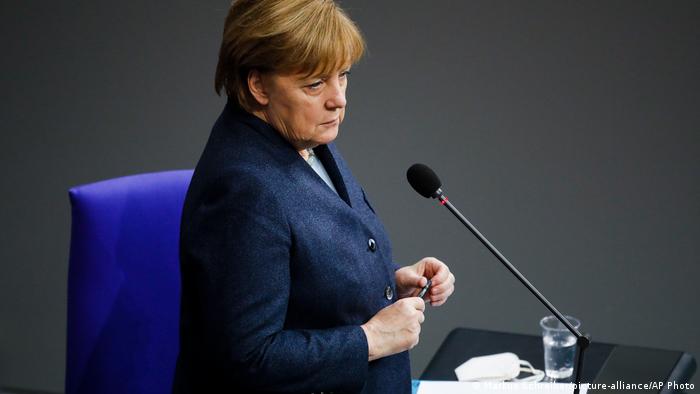 For what is likely to have been the last time, German Chancellor Angela Merkel was confronted in a regular question and answer session with members of the federal parliament, the Bundestag, this Wednesday.

It's another "last of" that's being closely watched in Germany as the Merkel era comes to end. The hour-long "chancellor's question time," is held three times a year, and was first introduced at the request of the Social Democrats (SPD) — the junior coalition partners to the conservative Christian Democratic Union (CDU) and Christian Social Union (CSU) — after the 2017 federal elections.

The aim was to "make the Bundestag the central place of social and political debate again." But anyone hoping for the theatricals seen in the UK's House of Commons at the weekly PMQs was quickly left disappointed as the chancellor regularly gets more of a light toasting than a grilling.

The orderly nature of the Q&A session is largely due to the format: one-minute questions, one-minute answers and no pre-submitted questions. The parliamentarians are not forbidden from clapping and aside from the odd jeer from members of the far-right Alternative for Germany(AfD), Bundestag President Wolfgang Schäuble rarely has to interject in the largely harmonious atmosphere.

Opening the session on Wednesday, Merkel took the opportunity to thank citizens for their "joint effort in" tackling the COVID-19 pandemic — emphasizing, in particular, the efforts of health care workers.

"But the pandemic is not over yet," Merkel warned. "We are still walking on thin ice." 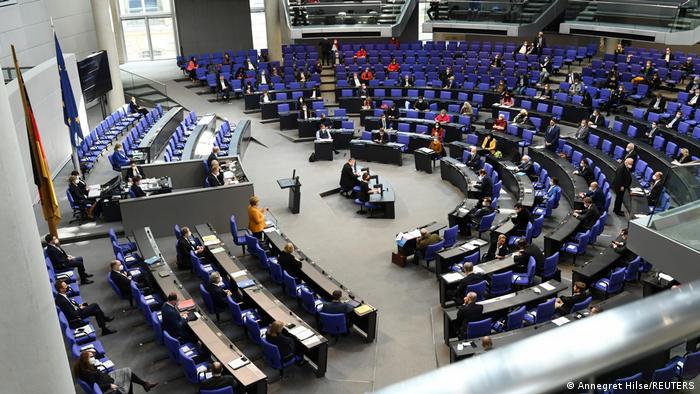 The first question of the hour goes to the largest opposition party, since 2017 that's been the far-right AfD. But aside from the odd moment on migration, Merkel has rarely appeared riled.

Instead, political commentators see the sessions as a regular reminder that captivating an audience was never part of her political strategy. Her deadpan answers are often accompanied by her famous diamond-shape hand gesture, which stays firmly intact for much of the sessions.

At the December 2018 question time, for example, far-right AfD MP Martin Hebner said the German chancellor had isolated Germany in the EU. The "vast majority" of the (at the time) 28 EU states were against the UN migration pact, he claimed."Shall we count them?” Merkel responded. "We can count together. And then we'll see that we land at fewer than 14 [EU member states]." "With pleasure!" Hebner continued. "But I see Ms. Merkel how nervous you've become."To laughter and applause in the chamber, Merkel responded: "Excuse me, of course, for the interruption. I just wanted to say, as a physicist, when it comes to numbers, I really care about the truth."

This Wednesday the first question came from AfD politician Albrecht Glaser, who was scolded by Bundestag President Schäuble for exceeding his allocated speaking time.

"How does the government view the EU's attacks on German statehood?" Glaser eventually asked, pointing to recent comments in which the EU Commission said it considers the ruling of Germany's Constitutional Court on the ECB's bond purchasesto be a "dangerous precedent."

A question on climate came from Greens MP Oliver Krischer. "Would you say what's happened in the last 16 years in terms of climate protection policy is enough?" he asked

"In view of the current situation, it is not enough," Merkel replied. "I can understand the impatience of young people ... [but] a lot has been done," she said, pointing to targets set with EU and bilateral agreements with China and the US.

It was Free Democrats (FDP) MP Alexander Graf Lambsdorff who touched on the issue of the Germany military.

"According to many experts, the Bundeswehr is no longer operational. How did it come to this?" he asked.

Merkel responded saying she doesn’t share this view. "Defense spending has increased significantly, which means better opportunities to arm the Bundeswehr," she said.

Greens MP Ulle Schauws, meanwhile, highlighted the small percentage of women in the Bundestag. In the current legislative period only 31.5% of MPs are women. In Merkel's conservative CDU/CSU parliamentary the ratio is just 20.7%. Only the far-right AfD has fewer female MPS with 10.2%.

"I'm absoutely unsatisfied [by the fact] and will only be satisfied when the ratio is 50/50," Merkel said.

In a follow-up question, Schauws asked: "Should there still be a female chancellor [after September's election]?"

Schauws party, the Greens, is the only one running with a female chancellor candidate, Annalena Baerbock, in September's elections.

To laughter in the chamber, Merkel responded: "I think that after 16 years of Angela Merkel, the citizens are mature enough to decide who they would like to have as chancellor."

Ahead of Germany's final Euro 2020 group stage match against Hungary in Munich on Wednesday night, Merkel didn't express an opinion on UEFA's decision to decline a request from Munich city councilto illuminate the Allianz Arena in rainbow colours.

The request was in solidarity with the LGBTQ community after legislation was passed through the Hungarian government, banning LGBTQ content for minors.

Merkel noted, however, that UEFA differentiated between German goalie Manuel Neuer wearing a captain's armband in rainbow colours and the planned illumination of the stadium.

After EU Commission President Ursula von der Leyen criticized the Hungarian legislation, AfD MP Beatrix von Storch asked on Wednesday whether this would not contribute to the division of the EU and attack Hungary's sovereignty.

Merkel reiterated previous criticism of the law saying she "considers this law to be wrong and also incompatible with my conception of politics."