Many German companies defied expectations and managed to stay afloat even as the COVID-19 pandemic wreaked havoc. However, it may be too early to rejoice as the bankruptcy numbers do not tell the whole story. 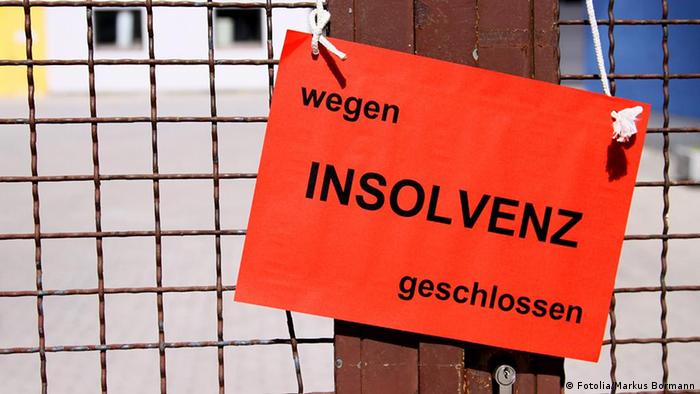 The number of corporate insolvencies in Germany fell last year to its lowest level since 1999, data from the Federal Statistics Office showed.

German district courts reported 15,841 corporate insolvencies in 2020, about 15% fewer than the year before.

The drop does not paint a true picture of the economic pain unleashed on the economy by the coronavirus owing to the German government's decision to allow pandemic-damaged businesses to delay filing for bankruptcy during the crisis.

"It's a paradox: Despite one of the biggest economic crises in Germany last year, insolvencies fell by 15%," said Ron van het Hof, CEO of credit insurer Euler Hermes in Germany, Austria and Switzerland. "This shows how strongly the insolvency trend is decoupled from the actual overall economic condition and the current state of the companies."

The German economy shrank by 5% last year, witnessing one of its worst recessions on record as COVID-19 lockdowns brought the economy to a virtual halt. The country still fared better than its European peers, helped by massive financial support from the government and strong demand for its goods from China.

The multibillion aid packages have offered major respite to firms that saw their sales plunge. The support has come in the form of tax breaks, wage subsidies, reduced VAT and even stake purchases in companies such as flag carrier Lufthansa — measures that have managed to keep many firms afloat.

German companies are required to file for insolvency within weeks if they default on their debt obligations and have piled up huge debts. However, in March 2020, the government announced a freeze on the insolvency rules to evade a wave of bankruptcies in the wake of the coronavirus crisis.

Berlin has extended its suspension of the insolvency filing obligation for over-indebted companies to April 30 amid the still-raging pandemic. The insolvency obligations for insolvent, illiquid companies were reinstated in October.

"Merely suspending the obligation to file doesn't address the true causes of insolvency, it just postpones the consequences of the crisis," said Timo Wollmershäuser from the Munich-based ifo Institut.

That's the worry many experts have been flagging, arguing that government support measures were artificially propping up unviable firms, the so-called zombie firms, which would have struggled to meet their debt obligations anyway, irrespective of the current economic situation.

Christoph Niering, chairman of the Association of Insolvency Administrators of Germany (VID), does not expect the relief measures to be unwound this year, especially with federal elections just months away.

Euler Hermes expects the aid packages to keep the insolvency level artificially under control this year. Corporate bankruptcies were likely to increase by just 6% in 2021 and another 15% in 2022, it said on Monday, adding that despite the rise the number of insolvencies would only be about 4% higher than pre-pandemic levels.

The renewed and extended lockdown has often led to greater financial burdens than the requested aid money can cushion, he argued. Such companies are "in some cases on very thin ice and could unwittingly slip into liability problems."

For suppliers, he said, this also creates uncertainty. "In some cases, they are flying blind because they don't even know whether customers are actually still solvent."

Germany's clothing sector stripped bare of orders in the pandemic

Lockdown extension in Germany: Disappointment for the travel industry

While flights to the popular holiday island of Mallorca are still possible, domestic tourism is to be put on hold. The industry has reacted with incomprehension. Many are facing bankruptcy.