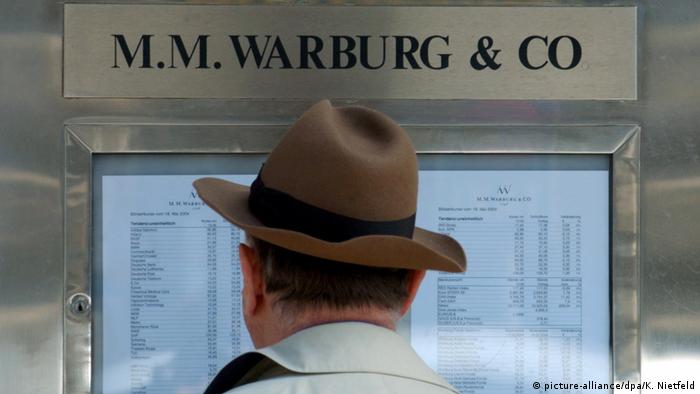 M.M. Warburg said the sentence would have no financial impact on it

A former executive at private German bank MM Warburg on Tuesday was sentenced to five-and-a-half years in prison for tax evasion, becoming the first banker to be jailed over the so-called "cum-ex" scandal, a major fraud scheme that raked in billions in tax dividends.

The man, a former close aide of the Hamburg-based bank's director, was found guilty of five counts of "aggravated tax fraud," the court in the German city of Bonn ruled.

What was the cum-ex scandal?

The scheme, first exposed in 2017, involved numerous participants wherein one trader "lent" another a share in a major corporation so it appeared that the shares were owned by two entities, therefore doubling tax reimbursement on dividends, although taxes had only been paid by one trader.

A legal loophole, which was scrapped by Germany in 2012, allowed the same shares to be owned by two entities.

The scheme was used across Europe, and cost state treasuries more than €55 billion. Germany was the hardest-hit country and the federal finance ministry in 2019 identified nearly 500 cases of suspected cum-ex fraud.

The scheme cost Germany's public finances about €5.5 billion ($6.7 billion), according to estimates published by the government in September.

The practice went on until a bank whistleblower alerted the media and forced authorities to clamp down on the scheme.

Several banks suspected of being linked to the scandal have been raided in recent months, including Deutsche Bank, Commerzbank, and a subsidiary of Clearstream in Frankfurt.

Hundreds of bankers were allegedly involved in the scheme and the Bonn court is hearing several cases over the scandal.

Two British former investment bankers were given suspended sentences by the court in March last year as part of a landmark trial into the vast scandal. A higher court will hear that case again on June 15.

M.M. Warburg said the sentence on Tuesday would have no financial impact on it. The bank was dropped as a defendant in the case in February.

Also, it has settled tax dues owed from the years 2007-11 last year but maintained that they were unjustified, saying the payment should "not be seen as an admission of guilt."

It said that the bank had always stuck to the law. Warburg also demanded compensation from individuals allegedly involved in the fraud.