Georgian War Exposes Rift With Russians in Baltics | Europe| News and current affairs from around the continent | DW | 15.08.2008

With Russia and Georgia engaged in war, Latvians and Estonians are finding themselves caught in the middle, despite being thousands of kilometers away from the crisis. Both nations are split by staunch political beliefs. 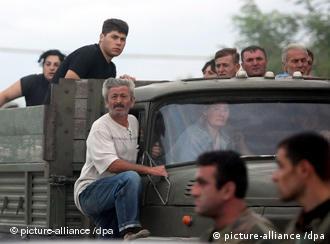 War in Georgia has divided the people of Latvia and Estonia, two ex-Soviet nations where Russian speakers are the largest ethnic minority.

Rival loyalties, never far below the surface, surged into the open as Baltic leaders sided with Georgia's US-backed president, Mikheil Saakashvili, based on a shared history of oppression by Moscow.

"Saakhashvili is an inappropriate president," said Valentina Smorodina, 75, an ethnic Russian who came to Latvia after World War II from Russia. "They ought to put him on trial and shoot him."

"The Latvian government should be ashamed for supporting him," she told DPA news agency at her home in Bolderaja, a mostly Russian neighborhood in the Latvian capital, Riga, where a former Soviet naval barracks sits empty.

Here, she resides in a parallel universe that has little to do with Latvia. Like many others, she watches Kremlin-sponsored television news and reads local Russian newspapers, which support Russia's military assault in Georgia.

As Russia and Georgia engage in propaganda wars in the international media, Russians and Latvians are split over the conflict 2,200 kilometers (1,367 miles) away. Demonstrators in all three Baltic nations -- Estonia, Latvia and Lithuania -- have held pro-Georgia rallies since the conflict erupted last week.

Mostly ethnic Estonians, Latvians, and Lithuanians protested outside Russian embassies in their capitals, calling on Russia to cease what they called "aggression" against a neighbor. Latvia's Russian minority, which accounts for about a third of its 2.3 million people, staged its own rally in support of Moscow's actions in Georgia.

Holding signs "Russia, you're right" and "Russia is a bulwark of peace," several hundred mostly ethnic Russians gathered this week outside the Russian embassy in the Latvian capital, Riga, two days after several thousands had come out to offer support to Georgia and condemn Russia.

A history of war

As Baltic governments offer political and humanitarian assistance to Georgia, ethnic Russians ask for blood and clothing donations for victims in the Georgian breakaway region of South Ossetia. History helps explain why Baltic leaders offered to help Georgia. Soviet tanks crushed 22 years of Baltic independence in 1940, deporting Estonians, Latvians and Lithuanians to Siberian gulags. After a three-year German occupation during World War II, the Soviets regained control of the Baltics until communism crumbled in 1990. So a resurgent Russia flexing its military muscle near its border in Georgia gives Balts a sense of deja-vu.

"My father jokingly asked, 'To which country would you be moving if the Russians come?' said Latvian woman Ilze Murniece, 32. As another sign of a divide, the Harmony Center, one out of two parties representing ethnic Russians in the Latvian parliament, boycotted a debate on the situation in Georgia on Thursday. Another party, For Humans Rights in United Latvia, had sharp words ahead of the vote to condemn Russia's behavior in Georgia.

"I hope that you'll remember the advice of former French President Jacques Chirac that there are moments when it's better for Latvia to keep silent," said Jakovs Pliners, referring to Chirac's reaction to the new EU members, including Latvia, support for the US invasion in Iraq in 2003.

"The way Russia throws its weight around clearly should make everyone a little upset," Estonian President Toomas Hendrik Ilves told DPA in a phone interview from Tallinn.

In response, tech-savvy Estonia sent experts to help divert cyber attacks on Georgian servers, after Estonian servers were attacked in a dispute with Russia in 2007.

The Baltics present themselves as examples of transformation from former Soviet republics into members of the European Union and NATO, which the three countries joined in 2004. They have been sharing their experience with Georgia and supported its bid to join NATO. Not all Latvians support Georgia, but they do widely condemn Russia's actions.

"Yes, I blame both sides," said Latvian university student Ainars Leijejs, who organized small protests at the Georgian and Russian embassies. "But there is no doubt that Russia today is the first and biggest aggressor and enemy of a world in peace."

Russian President Medvedev met leaders of Georgia's separatist South Ossetia and Abkhazia regions and vowed Moscow would back them in talks on their future status. Meanwhile, diplomatic efforts continue. (14.08.2008)

French President Nicolas Sarkozy said Wednesday from Tbilisi that his Georgian counterpart Mikheil Saakashvili had agreed to a French-brokered plan to restore peace with Russia over the breakaway South Ossetian province. (13.08.2008)

The Russia-Georgia war prompted many observers to comment on the importance of the south Caucasus region in terms of energy security. Political scientist and author Stefan Wolf answers questions on the topic. (12.08.2008)