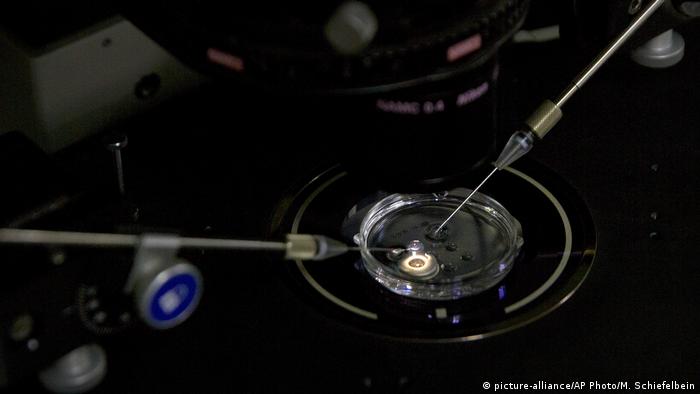 What did He Jiankui do?

Just before a symposium in Hong Kong on 28 November 2018, the biophysicist announced that he had created human embryos by artificial insemination and had previously altered their genetic material using the CRISPR-Cas9 genetic scissors. The embryos had been implanted into the biological mothers, who then carried the babies. Two twin sisters had already been born prior to He's announcement. A third baby was born a little later.

What was the transgression?

In contrast to the usual artificial insemination, which doctors worldwide perform on couples who have an unfulfilled desire to have children, He Jiankui had carried out a process called germ-line interference. He manipulated the genetic material even before the sperm and egg were joined, with the aim of creating new, altered genetic material. If the children thus created will have children of their own, they will pass the altered genetic information on to them. This is believed to be first case worldwide of creating designer babies.

What do ethicists think about this procedure?

Ethicists in medicine and the life sciences reject germ-line intervention in humans almost without exception. They fear that such an approach could tempt doctors to play God and create human life a la carte: Parents might be able to select certain characteristics of their offspring, which can then be built into the genome before fertilization. The idea of repairing existing hereditary diseases before fertilization also meets with little support among ethicists. Parents who wish to have children often have the option of using sperm and eggs donated by healthy people.

How did He Jiankui justify the intervention?

The biophysicist justified the procedure by saying that the biological father of the two twin sisters was HIV positive. The aim was to give the babies a mutation of the CCR5 gene that would make them immune to the HIV virus. It was therefore ethically justified, he says.

Was the intervention necessary to protect the children from HIV?

No, even HIV-positive parents can give birth to healthy children if the parents consistently take their antiretroviral medication. In addition, the children must be treated from the beginning. It is also by no means medically certain that the babies have gained the promised immunity against HIV. Although there is a natural mutation of the CCR5 gene that makes people immune to HIV, the mutation introduced by He Jiankui is not identical to this one.

Does this chip revolutionize gene therapy?

What are the risks for the children?

There is a risk that the genetically modified material in the children will show completely unpredictable side effects later in life. Their life expectancy is probably significantly lower than that of children conceived normally, according to a study by doctors at the University of Berkeley.

How did the Chinese authorities react to the scandal?

Rather awkwardly. China is striving for research leadership in the field of genetic engineering also in the field of human medicine, but does not like bad press. With He Jiankui's sentencing, the Chinese government apparently wants to put an end to the scandal that hit it relatively unprepared in 2018. There are indications that many other scientists in his field shared He Jiankui's lack of awareness about the ramifications of such work. When the scandal broke out, documents from the hospital involved were available that showed that the medical ethics committee had even agreed to the procedure. Later, however, Chinese investigators raised doubts over the authenticity of these documents. Only after the scandal broke did close colleagues of the biophysicist distance themselves from him and his methods. Until then, He Jiankui had been promoted as a top researcher.

Now he has been  sentenced to three years in prison and must pay a fine of three million yuan, which is the equivalent of about 380,000 euros.