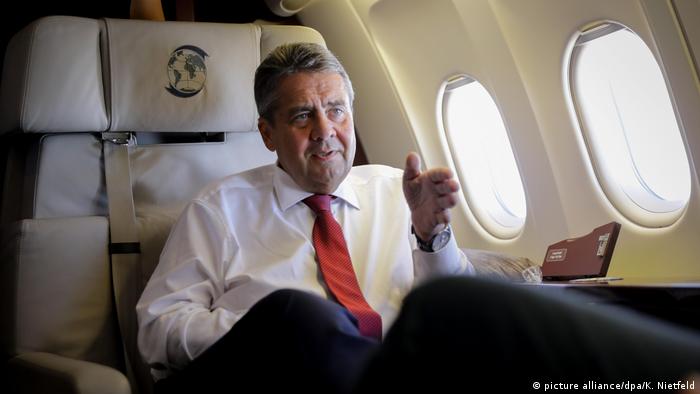 In an interview published in German newspapers on Monday, Foreign Minister Sigmar Gabriel once again rejected an increase in military expenditure and got in a nasty dig at Chancellor Angela Merkel in the process. Gabriel, whose center-left Social Democrats (SPD) are in a tight election battle with Merkel and her Christian Democrats (CDU), said the chancellor and her party were subordinating themselves to the militaristic policies of Donald Trump.

The foreign minister said the CDU and Bavaria's Christian Social Union (CSU) sought to appease Trump by shoving money into the military to the detriment of social spending, according to the interview in RedaktionsNetzwerk newspapers. September's Bundestag elections will prove "a referendum on whether Germany remains a peaceful power or joins Trump's warfare madness," Gabriel said. He added that the CDU's and CSU's choice to "practically voluntarily bend over and promise to double the German military budget after the Bundestag election is nothing less than a sign to Trump that they will give in to his pressure."

Trump has demanded that the US's NATO partners raise their defense spending to the organization's guideline of 2 percent of gross domestic product. Although Germany contributes to the alliance in many important ways, the country devotes just about 1.26 percent of GDP to military spending.

NATO spending had been a key campaign issue for Trump, and since he assumed the presidency he has dedicated a significant amount of social media energy to critiquing the US's partners - especially Germany.

Gabriel's remarks came in the context of the CDU-CSU bloc's election platform pledge that Germany would conform to NATO's guideline in tandem with Deputy Finance Minister Jens Spahn's recent proposal to reduce the domestic social budget. "To me, this is a subjugation to the US president of a type that until recently I would not have thought possible," Gabriel said.

The foreign minister's SPD has accused Finance Minister Wolfgang Schäuble, of Merkel's CDU, of seeking to cut support for people left unemployed for extended periods and reduce funding for job centers, which help with training and placement. According to a report in Monday's Süddeutsche Zeitung, Schäuble has proposed a 2018 budget of just 4.185 billion euros ($4.945 billion) for Germany's most economically excluded residents - or about 258 million euros less than was planned for the current year.

Labor Minister Andrea Nahles, of the SPD, said she would seek to ensure that job centers "retain the necessary room for maneuver."

Everything is fine, Merkel is here. That's her party's message as election season gets underway. That message is only half true, as DW's Kathleen Schuster found out at her first major election appearance in Dortmund. (12.08.2017)