Foreign ministers meeting in Liverpool threatened the Kremlin with fresh economic sanctions in the event of an invasion of Ukraine. Meanwhile, Tehran was told that time is running out to revive the nuclear deal. 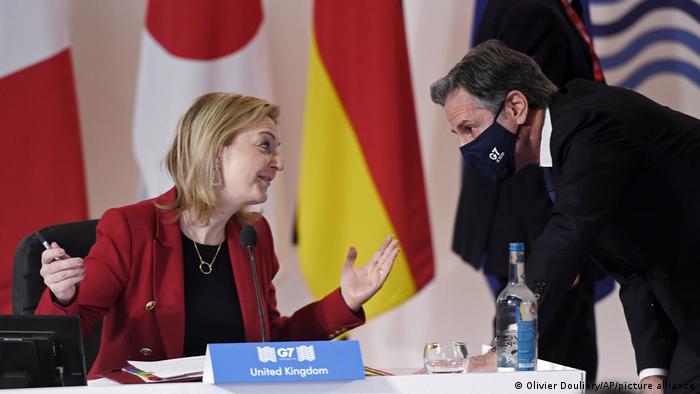 The Group of Seven (G7) wealthiest liberal democracies on Sunday issued dual warnings to Russia and Iran as they sought to present a strong, united front against global threats.

G7 foreign ministers meeting in Liverpool, England, said time was running out for Tehran to agree on a fresh deal to curb its nuclear ambition, and warned Moscow about the consequences of invading Ukraine.

G7 ministers discussed plans to rein in Russia's ambitions amid concerns that Moscow might be preparing to attack Ukraine.

US intelligence assesses that Russia could be planning a multi-front offensive on Ukraine as early as next year, involving up to 175,000 troops.

The Kremlin denies the allegations but has demanded legally binding security guarantees that NATO will not expand further east or place its weapons close to Russian territory.

"We've been clear that any incursion by Russia into Ukraine would have massive consequences for which there would be a severe cost," British Foreign Secretary Liz Truss told a news conference as the G7 talks wrapped up.

When it comes to economic sanctions, Truss said the G7 was "considering all options."

There was no clear agreement, however, on whether to slap penalties on the Nord Stream 2 gas pipeline, Reuters news agency reported, citing sources with knowledge of the discussions.

However, US Secretary of State Antony Blinken said it was hard to see the pipeline becoming operational "if Russia has renewed its aggression on Ukraine, if it takes renewed action."

"So I think President (Vladimir) Putin has to factor that in, too, as he's thinking about what he's going to do next,'' Blinken said.

After the G7 meeting, German Foreign Minister Annalena Baerbock told television station ZDF that "in the event of further escalation, this gas pipeline could not come into service," clarifying earlier threats made by Chancellor Olaf Scholz.

The controversial pipeline, carrying Russian gas to Germany, has yet to be given an operating license by the German government.

Poland and the US have called for Germany to delay any approval as a warning to Russia over Ukraine.

Britain, which holds the G7 rotating presidency, said resumed talks in Vienna were the Islamic Republic's "last chance to come to the negotiating table with a serious resolution."

"There is still time for Iran to come and agree this deal," Truss said.

Her comments are the first time a signatory to the original Iran deal has given an ultimatum for the talks.

Negotiations restarted on Thursday to try to revive the 2015 deal between Iran and world powers, which Washington withdrew from under former President Donald Trump in 2018.

US President Joe Biden has said he is ready to return to the agreement and Iranian officials maintain they are serious about committing to the talks.

Western powers have accused Tehran of backsliding on progress made earlier this year and are playing for time.

British FM Liz Truss: "This is the last chance for Iran"

The group has launched a "Build Back Better World" initiative to offer developing nations funding for big infrastructure projects as an alternative to loans from China that, the West argues, often comes with strings attached.

Speaking at the end of the summit, Truss said the G7 was concerned about Beijing's "coercive economic policies."

"And what we want to do is build the investment, reach the economic trade reach of like-minded, freedom-loving democracies," she said. "That is why we are stepping up our investment into low-and middle-income countries."

As the G7 expressed a united front, Baerbock said the idea of "strong cooperation" was something that could be found in Liverpool, citing one of the host city's football clubs whose anthem is "You'll Never Walk Alone" by Gerry and the Pacemakers.

"And this 'You'll Never Walk Alone' is also the guideline of the future German G7 presidency, the fact that we can only shape this world together, not alone," Baerbock said on Sunday.

Germany will assume the G7 presidency from the UK in 2022.