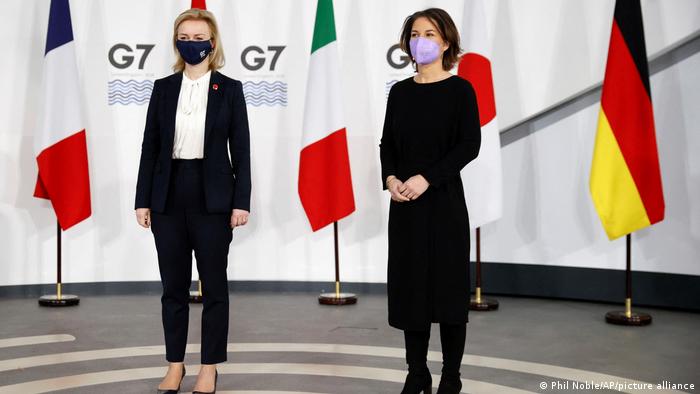 UK Foreign Secretary Liz Truss welcomed the Group of Seven (G7) foreign ministers, including Germany's Annalena Baerbock, on Saturday and offered Russia a stern warning over its actions toward Ukraine.

With talks taking place in Liverpool, Truss also called on "free democratic nations" to wean themselves off Russian gas.

This comes as Russia has reportedly engaged in significant troop build-up near its border with Ukraine, while the Nord Stream 2 pipeline, a project to deliver natural gas from Russia directly to Germany, could play a major role in pressuring Moscow.

How strong is the G7 unity against Russia?

On the sidelines of the gathering, Truss met German Foreign Minister Baerbock, who was attending her first international gathering.

A member of the Green party, Baerbock wanted to present the priorities of the German G7 presidency, which starts in the coming year.

She urged parties to return to the negotiating table, referring to the Normandy format — involving talks between France, Ukraine and Russia, as well as Germany — which German Chancellor Olaf Scholz highlighted after meeting French President Emmanuel Macron on Friday.

"We need to take every action to return to dialogue," Baerbock told reporters on the sidelines in Liverpool.

Baerbock also said that "time is running out" to revive a 2015 nuclear deal between world powers and Iran.

After a five-month hiatus, talks have recently resumed in Vienna to try to restore the nuclear pact, but Baerbock said "that we do not have any progress" since the resumption of negotiations.

What did Truss say?

Truss said that an invasion of Ukraine would be "a strategic mistake" with "severe consequences" for Moscow. The United States and other NATO members have previously said they will impose strict sanctions on Russia if Moscow launched an invasion.

Truss said she wanted to work to "make sure that free democratic nations are able to have an alternative to Russian gas supplies." This follows US concerns around the Nord Stream 2 pipeline from Russia to Germany.

"There have been decisions made by the free world… in the short term to obtain cheap energy or cheap financing, and that has a long-term cost for freedom and democracy," she added. "And we can't make that mistake again."

"We need to come together strongly to stand up to aggressors who are seeking to limit the bounds of freedom and democracy,"

What is the G7 summit?

The G7 is a meeting of top diplomats from the UK, the United States, Canada, France, Germany, Italy and Japan.

Ministers from the Association of Southeast Asian Nations (ASEAN) will join the summit for the first time on Sunday. South Korea, Australia, South Africa and India will also participate as "guests" chosen by the UK.

The inclusion of Asian countries is part of the UK's "Indo-Pacific tilt" after it left the European Union last year.

Besides Russia, topics to be discussed at the G7 summit include Covid vaccines, climate change, tensions in the Western Balkans, Afghanistan and North Korea.

What do Moscovites think of rising military tensions with Ukraine?