Association of Southeast Asian Nations (ASEAN) leaders have met without Myanmar present. The bloc asked Myanmar to send a civilian, not the military junta leader, and the junta refused. 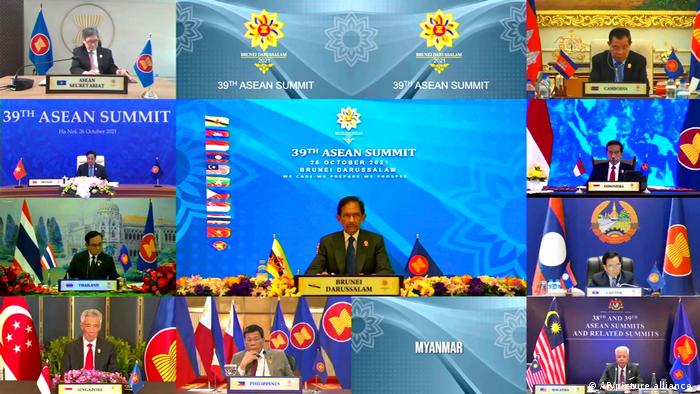 The leaders of the Association of Southeast Asian Nations (ASEAN) met virtually Tuesday without Myanmar present after the 10-member bloc took the bold step of requesting Myanmar send someone other than the military junta leader.

Rather than send a "non-political" representative as ASEAN had requested, Myanmar's ruling military leaders opted to skip out on the meeting.

The rare rebuke from ASEAN comes as the group faces international pressure to broker a solution to the ongoing crisis since the military overthrew the country's civilian leaders in a coup on February 1.

Myanmar previously turned down requests for a special envoy to meet with "all stakeholders," a phrase that implies the inclusion of deposed leader Aung San Suu Kyi. On Tuesday, the 76-year-old testified in court for the first time.

The generals have placed her on trial for four months, beginning in June. Suu Kyi faces a litany of charges including incitement related to statements she gave criticizing the coup, and her lawyers have been barred from speaking to the media.

ASEAN said it would not permit Senior General Min Aung Hlaing, responsible for the ouster of Suu Kyi, to represent Myanmar. The move is rare for the bloc that prides itself on consensus and non-interference in the affairs of member states.

Leaders who did attend were sharply critical of Myanmar and the ruling junta for not following a road map to peace outlined by the group six months ago. Instead, rights groups say 1,200 people have been killed in the nationwide crackdown on protesters, a figure disputed by the military.

Brunei, which currently chairs ASEAN, asked that the group exclude Myanmar's military leader days after ASEAN special envoy Erywan Yusof said the junta would not grant him access to Suu Kyi and other deposed civilian leaders. The junta leaders also failed to engage in dialogue with Yusof.

Myanmar's military has ruled for 49 of the past 60 years. It has blamed ASEAN of departing from its norms and being influenced by other countries, such as the United States.

The junta has placed blame for Myanmar's chaos since it has seized power on "terrorists" loyal to a shadow National Unity Government (NUG), an alliance of anti-coup groups, militias and ethnic minority guerrillas.

On Monday, US national security adviser Jake Sullivan spoke with two NUG leaders and "underscored US continued support for the pro-democracy movement."

Sullivan said the US will continue to seek the release of those who have been "unjustly detained," including prominent pro-democracy activist Ko Jimmy, arrested Saturday in a raid.

On Tuesday, US President Joe Biden attended the virtual summit and announced $100 million (€86.25 million) in health spending, a new climate initiative, programs to assist with pandemic economic recovery and education as a way to balance China's growth and rise as a national security adversary.

What have ASEAN leaders said about Myanmar's absence?

Indonesian Foreign Minister Retno Marsudi noted ASEAN chair Brunei had invited Myanmar's most senior veteran diplomat, Chan Aye, but it was the military who refused to permit her attendance.

Marsudi said Indonesian President Joko Widodo told the summit that the unprecedented move to downgrade Myanmar's participation in ASEAN "was a tough decision but it had to be done."

Marsudi, quoting Widodo, said the bloc was "also obliged to uphold other principles in the ASEAN charter such as democracy, good governance, respect for human rights and constitutional government." She added Widodo and "Indonesia consistently hope that democracy through an inclusive process can be quickly restored in Myanmar."

Hun Sen, the Cambodian prime minister who will chair ASEAN next year, said: "Today, ASEAN did not expel Myanmar from ASEAN's framework. Myanmar abandoned its right."

Thanakorn Wangboonkongchana, a Thai government spokesperson, said the country's prime minister Prayut Chan-o-cha told the summit that the Myanmar crisis is a test of ASEAN's ability to resolve its own regional problems.

Prayut, a retired general, is considered the ASEAN leader closest to Myanmar's junta leaders. He urged Myanmar to implement the five-point road map it agreed to with ASEAN and said the issue was a reputational one.

A Brunei press statement after the summit neglected to mention Myanmar's absence, but reiterated that ASEAN leaders call for mediation in the Myanmar crisis to "uphold ASEAN's credibility."

A group of lawmakers known as ASEAN Parliamentarians for Human Rights urged the bloc to work with the opposition in Myanmar.

In a statement, the lawmakers said, "ASEAN must discontinue inviting any other junta representatives to all ASEAN official meetings until there is an end to violence, all political prisoners are freed, and the will of the people for fully fledged democracy has been heard."