Myanmar's ousted leader is being tried by the military junta on a series of charges including corruption and inciting public unrest. According to her lawyer, the 76-year-old has asked for a less strenuous court schedule. 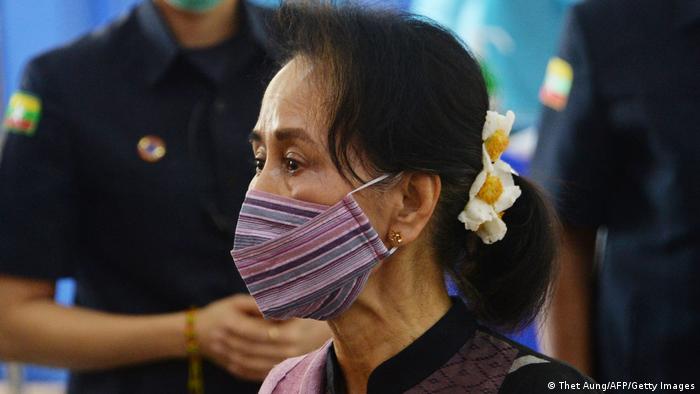 Instead of attending hearings every week, Suu Kyi has asked to attend every two weeks.

"She is tired. At her age, it is not convenient to sit for hearings every day of the whole week," Maung Zaw told Reuters, saying he expected a decision from the judge next week.

It is not the first time that the detained Nobel Peace laureate has complained of ill health since being arrested and put on trial by Myanmar's military junta.

Last month, Suu Kyi skipped the first day of the trial, citing health reasons. She appeared in court a day later saying she was "somewhat dizzy."

Suu Kyi's lawyer said the situation was not cause for alarm.

"She doesn’t have any disease nor specified sickness. It is not a concerning situation. She is just tired," Maung Zaw told Reuters.

Suu Kyi, a prominent pro-democracy politician, was arrested immediately after Myanmar's military toppled the democratically elected government in February. She has been under house arrest since.

Following her arrest, the military court brought forward a string of charges against Suu Kyi, who heads the National League for Democracy party.

Malaysia's foreign minister on Monday expressed dismay after the junta hesitated to grant representatives of a multinational association access to Suu Kyi.

The 10-country Association of Southeast Asian Nations (ASEAN), which includes both Malaysia and Myanmar, has requested to speak to Suu Kyi, who is currently on trial for corruption under Myanmar's military junta.

The junta's reluctance to grant the ASEAN envoy's request has drawn scorn from Malaysian Foreign Minister Saifuddin Abdullah, who warned of repercussions "unless there is progress."

"We are disappointed that the Myanmar authorities have not cooperated with the Special Envoy of the ASEAN on Myanmar," Abdullah wrote on Twitter.

The Malaysian official warned that Myanmar's junta chief, Min Aung Hlaing, who is the chairman of ASEAN's South Asia Council, could be barred from attending the bloc's upcoming summit at the end of October.

"Unless there is progress, it would be difficult to have the Chairman of the SAC at the ASEAN Summit," he said.

Abdullah's comments come after a junta spokesperson on Thursday said it would be "difficult" for the envoy to hold talks with people on trial and the regime was more open to meetings with "official organizations."