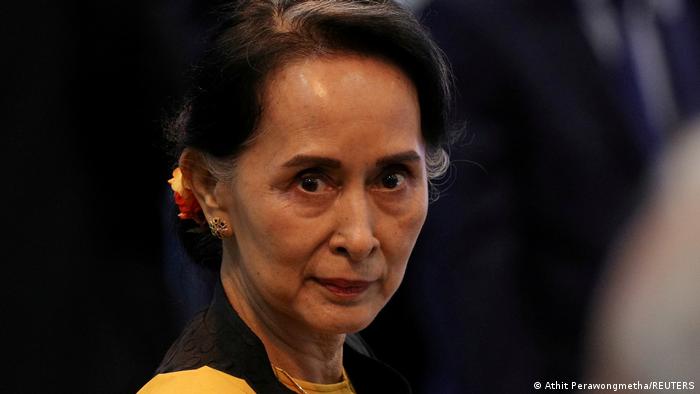 Suu Kyi has been in custody since the military took power in a coup on February 1, and faces a slew of other criminal charges.

The trials against her are expected to start in earnest on Monday with evidence hearings in the capital Naypyitaw.

What do the new charges include?

The Anti-Corruption Commission accused the 75-year-old Nobel laureate of having accepted illegal payments of gold and $600,000 (€493,000) in cash.

Case files regarding the charges were opened in the capital city on Wednesday, the state-run newspaper Global New Light of Myanmar reported. The charges carry a potential 15-year prison sentence.

"She was found guilty of committing corruption using her rank. So she was charged under Anti-Corruption Law section 55," the paper said.

The allegations go back to an accusation raised by the former Yangon regional chief minister against Suu Kyi that she accepted cash from him, as well as 11 kilograms (24 pounds) of gold. The Anti-Corruption Commission said she had committed "corruption using her rank," according to the state-run paper.

The charges also accuse Suu Kyi of abuse of power in renting out two areas of land for her charitable foundation.

Why is the former leader facing criminal charges?

Suu Kyi has often been the face of the protests that erupted across the country following the coup, with protesters holding up images of her. The army's refusal to back down has plunged the southeast Asian country into turmoil.

The junta deposed the elected government with accusations that her party had cheated in the November elections — allegations that have been rejected by the country's own electoral commission as well as international observers.

Suu Kyi was quickly detained by military forces and hit with several charges, ranging from illegal possession of a walkie-talkie to violating the Official Secrets Act. The corruption charges are the most recent addition to that list, which Suu Kyi's supporters consider politically motivated.