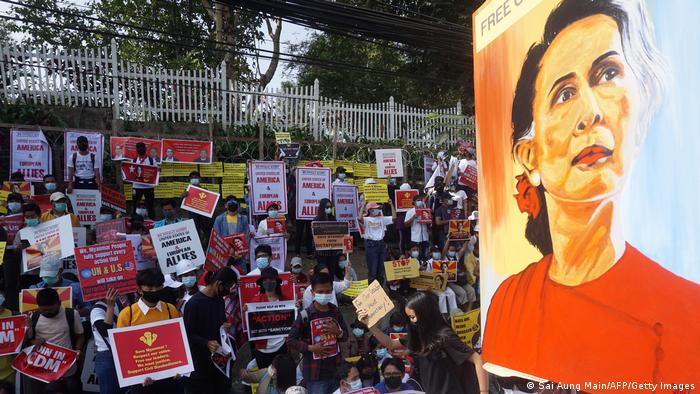 Aung Saan Suu Kyi has been detained since early February

Suu Kyi was placed under house arrest and had not been seen in public since the February 1 military coup that overthrew her government.

Lawyer Thae Maung Maung told Reuters news agency that Suu Kyi looked in good health and held a face-to-face meeting with her legal team for about 30 minutes before the court hearing.

Myanmar state television showed a photo of Suu Kyi sitting straight-backed in a small courtroom, wearing a pink face-mask, with her hands folded in her lap.

Appearing alongside her were co-defendants, former President Win Myint and Myo Aung, and the former mayor of Naypyitaw, Myanmar's capital.

In recent weeks, the 75-year-old answered questions in court by video link. Her lawyers had not been able to meet her in person.

"She said she was praying for everyone to get well. She said the party was formed for the people, so it will exist as long as the people exist," Frontier Myanmar quoted Suu Kyi's lawyer as saying.

What are the charges against Suu Kyi?

Suu Kyi is accused of sedition, violating a state secrets law and breaking coronavirus containment measures among other charges.

In February, Myanmar's junta amended the country's colonial-era sedition law, increasing the penalty for the crime from three years to a minimum of seven years and up 20 years in jail, according to The Irrawaddy news outlet.

Violation of Myanmar's Official Secrets Act could lead to a prison sentence of up to 14 years.

A special courtroom had been set up for Monday hearing in the capital Naypyidaw, not far from Suu Kyi's home, her lawyer Min Min Soe told German news agency dpa.

Her lawyers reject the case against her, claiming the charges are trumped-up.

Despite fierce reprisal by security forces, anti-coup protests continue across Myanmar, demanding the release of political detainees, including Suu Kyi.

At least 818 people have been killed so far in crackdowns on anti-coup protests, according to the Association for the Assistance of Political Prisoners (AAPP) monitoring group.

AAPP said nearly 5,400 people had been arrested since the coup.

The junta claims the coup was in response to electoral fraud in the November election.