Myanmar: Aung San Suu Kyi may be unaware of unrest amid additional charge

The ousted leader's attorneys have only been able to talk to their client about "legal matters" and indicated Suu Kyi may not be aware of the bloodshed that has unfolded since the coup. 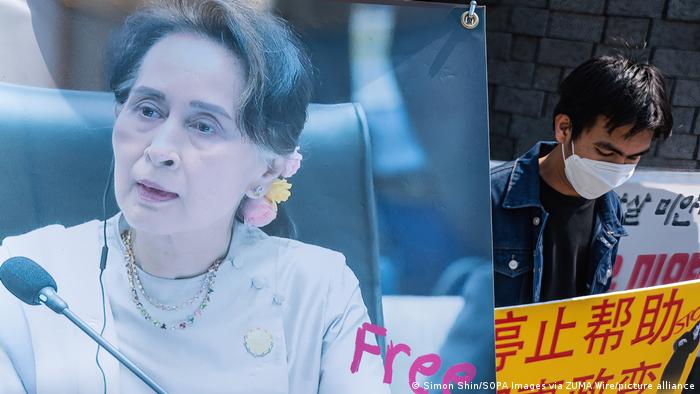 Aung San Suu Kyi may not even be aware of the violence that has occurred since she was ousted via a military coup.

Myanmar's deposed civilian leader Aung San Suu Kyi was in court on Monday, as it emerged she may not even be aware of the bloodshed that has unfolded since the military seized power more than two months ago.

According to the Assistance Association for Political Prisoners, the junta's tough crackdown on dissent has seen more than 700 civilians killed in Myanmar since the coup.

Her lawyers, however, have only been able to discuss legal issues via a video link.

"No, we haven't, we could only talk about legal matters," lawyer Min Min Soe told Reuters when asked if her legal team had been able to talk to her about the protests.

Suu Kyi, who is facing several years in prison if found guilty, has asked if she can meet her lawyers in person, though so far such appeals have fallen on deaf ears.

And on Monday she was hit with a fresh criminal charge "under section 25 of the natural disaster management law," lawyer Min Min Soe told AFP, after the hearing in the capital Naypyidaw. The charge is in connection with violating coronavirus restrictions, though the exact details have not been revealed.

"She has been charged in six cases altogether — five charges in Naypyidaw and one in Yangon."

Suu Kyi has not been seen in public since she was detained in the early hours of February 1 as the military deposed her government and seized power.

The generals have used increasingly brutal methods to try to quell a growing protest movement against their rule, while Suu Kyi faces a raft of charges that could see her barred for life from office.

The whereabouts of Suu Kyi and President Win Myint, who was also taken into custody in the wake of the military coup, remains unclear.

Global leaders have expressed outrage at the military's actions in Myanmar, while Germany's Foreign Minister Heiko Maas has suggested the turmoil could lead to a civil war in the southeast Asian country.

Protesters are using the holiday symbol to take a stand against the military overthrow of Aung San Suu Kyi's elected government.

Myanmar: Protests erupt in London after ambassador locked out of embassy

Kyaw Zwar Minn spent the night in his car after being locked out of his embassy in London. The military junta has sidelined him after he showed support for ousted leader Aung San Suu Kyi.