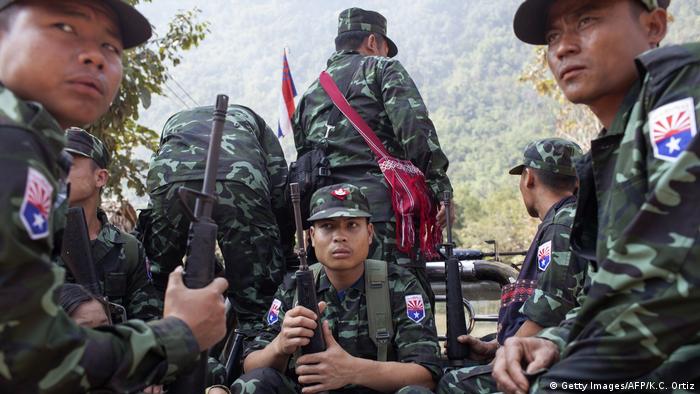 Karen National Union (KNU) forces on Tuesday attacked and seized a military outpost in eastern Myanmar, close to the border with northwestern Thailand.

Fighting occurred near the Salween river which separates Myanmar and Thailand. Thai villagers said they could hear gunfire from the clashes.

Taw Nee said that the group is collecting information on the number of injuries and deaths from the fighting between Karen forces and Myanmar's military.

Myanmar's military has not yet commented on the attack.

Who are the Karen rebels?

The Karen National Liberation Army, the armed wing of the Karen National Union, has been battling Myanmar's government since 1949. Nationalists from Myanmar's Karen ethnic minority ultimately seek their own independent state, with rebels also calling for a federal system of government.

The military has been launching air strikes in Myanmar's southeastern Kayin state since March, with ethnic Karen people fleeing to Thailand in response to the aerial assault.

Myanmar has been under military control since a coup on February 1 ousted members of the ruling National League for Democracy Party, with State Councillor Aung San Suu Kyi and other leaders placed under arrest. Myanmar's de facto leader is now Senior General Min Aung Hlaing.

The KNU is reportedly sheltering critics of the military junta.

Myanmar's military has brutally cracked down on anti-coup protesters, drawing widespread condemnation from the West. So far, the military has killed over 750 civilians in its push against the opposition.

Leaders of nine southeastern Asian nations called for an end to the violence in Myanmar during an ASEAN summit on Saturday. Indonesian President Joko Widodo labeled the political crisis in Myanmar "unacceptable" in remarks during the gathering.

The junta on Monday said it would "positively" consider suggestions proposed by ASEAN.