ASEAN leaders called on the Myanmar junta to end violence against citizens. At the Jakarta summit, the regional group agreed to appoint an envoy to tackle the deadly crisis. 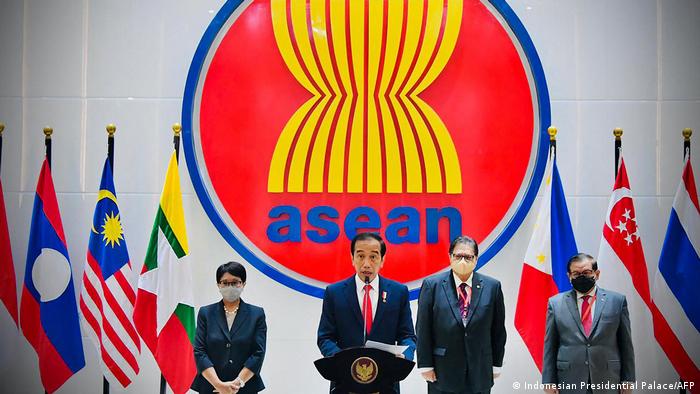 ASEAN leaders met in Jakarta to discuss the situation in Myanmar

Myanmar's neighbors will appoint a special envoy to try to resolve the political crisis sparked by the military coup in the country, Indonesian President Joko Widodo said on Saturday.

The ASEAN regional grouping agreed on the move during crisis talks in Jakarta, attended by leaders from the 10 Southeast Asian member states.

ASEAN to send a delegation to Myanmar

Myanmar junta leader Min Aung Hlaing made his first trip abroad since the coup on February 1 to take part in the talks. He did not make a formal statement. However, the organization said it had reached a consensus on sending a delegation and the envoy to Myanmar.

"The first requested commitment is for the Myanmar military to stop the use of violence and that all parties there at the same time must refrain so that tensions will be reduced," Widodo said. "The violence must be stopped and democracy, stability and peace in Myanmar must be restored."

"An inclusive dialogue process must be started. Political prisoners must be released immediately," he said, adding that a special envoy from ASEAN needed to be appointed to push for such dialogue.

Malaysian Prime Minister Muhyiddin Yassin said Myanmar accepted the proposal to stop violence against civilians, according to state news agency Bernama. He called the meeting a success: "We have succeeded. It's beyond our expectation in getting the outcome from today's meeting."

Singaporean Prime Minister Lee Hsien Loong called on Myanmar to allow an ASEAN delegation and the United Nations special envoy to visit the country, in comments carried by Channel NewsAsia.

The junta has launched a bloody crackdown on protests which has left more than 700 people dead. The United Nations estimates that about 250,000 people have been displaced.