Can ASEAN broker a deal to end Myanmar violence?

The 10-member Southeast Asian regional alliance is holding a special summit on Saturday to discuss Myanmar. But chances of a breakthrough are slim. 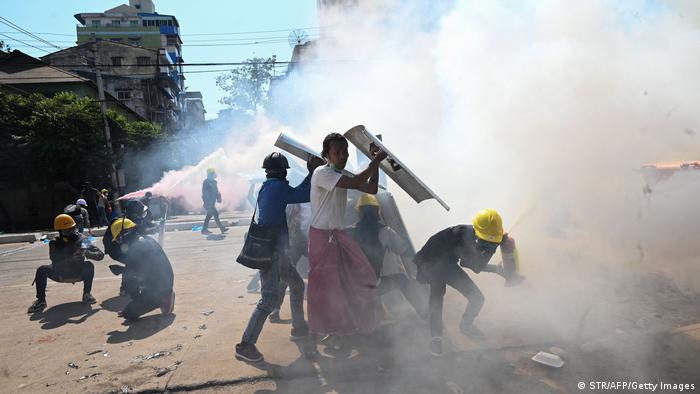 The Association of Southeast Asian Nations (ASEAN) bloc faces its toughest test in decades on Saturday when its leaders hold a special summit in the Indonesian capital Jakarta to discuss the political turmoil in Myanmar.

So far, the bloc's response to the crisis has been mixed. Brunei, which holds the ASEAN chairmanship this year, issued a strong statement soon after the February 1 coup. Meanwhile, Indonesia, Malaysia and Singapore have employed tougher language than usual over the internal politics of a fellow member.

But several of the region's authoritarian countries, which have veto power in an organization run on the principle of consensus-based decision-making, are believed to be ready to oppose any attempt by ASEAN to backtrack from its long-held policy of non-interference.

The main problem for ASEAN, according to sources who spoke to DW, is it has "neither the carrots nor the sticks" with which to entice Myanmar's military junta to fundamentally alter its ways.

'Most likely outcome will be simply more words'

Since the coup, which overthrew the democratically elected National League For Democracy (NLD) civilian government, an estimated 739 people have been killed by Myanmar's military forces — known as the Tatmadaw — and more than 3,300 arrested after months of nationwide protests, according to activist group Assistance Association for Political Prisoners.

Sebastian Strangio, the Southeast Asia editor at The Diplomat magazine, said expectations should be tempered ahead of Saturday's summit. "The most likely outcome will simply be more words," he told DW. "I think there's a good chance the bloc will voice its concern in less equivocal terms than [it has done] previously, but I don't have much faith that the summit will produce anything substantial."

On Thursday, Philippine President Rodrigo Duterte and Thai Prime Minister Prayuth Chan-ocha announced they will not be attending, raising questions over how significant regional governments think the summit will be.

But Min Aung Hlaing, the junta leader, is expected to attend. No invitation has, so far, been offered to the National Unity Government (NUG), formed last week by opponents of the coup to create an internal government-in-waiting.

Richard Heydarian, a geopolitics expert at the Polytechnic University of the Philippines, called it a "travesty" and a "huge dark mark on ASEAN's already questionable image" that the summit can serve as a "platform for the brutal Tatmadaw regime."

Min Aung Hlaing will be allowed to "enjoy the normal diplomatic oxygen in the kinds of legitimation rituals that come with attendance," he told DW.

Joshua Kurlantzick, a senior fellow for Southeast Asia at the Council on Foreign Relations, told DW that Min Aung Hlaing's participation suggests that ASEAN is not going to take a particularly hard line toward Myanmar.

"It also suggests that he feels fairly comfortable about leaving Myanmar," Kurlantzick added, referring to speculation over the loyalty of the entire military to the junta leadership.

ASEAN knows that its own status in international politics is at risk. For years it has claimed that the international community should work with the bloc to help solve problems within the region.

"Common sense suggests that ASEAN should consider some unprecedented or at least extraordinary measures," such as "temporary suspension of Myanmar's membership until full restoration of the democratic, civilian government," said Heydarian.

But Kurlantzick argued that such an outcome, even on a temporary basis, appears highly unlikely.

Indeed, other authoritarian governments in the region won't want to punish Myanmar over issues they themselves could later be punished for. Such splits leave "ASEAN relatively useless in dealing with this crisis," said Kurlantzick.

Will dialogue be possible?

Hunter Marston, a PhD candidate at the Australian National University, noted that if ASEAN can broker a temporary cessation of violence, it "might" pave the way for future dialogue between the military and the NUG.

But that, too, appears unlikely.

The NUG, created on April 16, is composed of officials from the ousted NLD government, as well as anti-coup protest leaders and representatives of ethnic minority organizations. This has created a broad camp of anti-Tatmadaw forces but could also, some fear, increase the chances of a major civil war in the country.

"What began as a movement to reverse the coup has since morphed into a struggle to uproot the military from Myanmar's economy and political life," Strangio said, referring to the NUG.

The junta, meanwhile, has shown "no evidence" that it will reconsider its brutal crackdown on the civil population, said Heydarian. Moreover, it has weathered the targeted sanctions by the EU and US against military-aligned businesses without moderating its behavior for the sake of domestic and international recognition.

The military ruled Myanmar as a hermetic state from 1962 until the early 2010s, when it moved to accept limited democratization of the political system.

"Shifting this zero-sum conflict onto terrain on which the two sides would be willing to enter into some sort of dialogue will require deft diplomacy and political imagination, likely more than ASEAN possesses," said Strangio.

'ASEAN must not accept coup as a fait accompli'

On Wednesday, the US imposed additional sanctions on Myanmar firms connected to the military after the EU escalated sanctions two days earlier.

Igor Driesmans, the EU ambassador to the ASEAN bloc, wouldn't speculate on the summit's outcomes but said that the EU "supports ASEAN-led attempts to mediate and address the current crisis in Myanmar since its outset."

However, he told DW, "ASEAN must not accept the coup as a fait accompli. This will not bring peace and stability to Myanmar. Only an inclusive dialogue aimed at restoring the democratic institutions will do so."

Except for targeted sanctions, the international community up until now has sat back and hoped that ASEAN could arrange a solution to the crisis. If that fails, the EU and US may decide that they must find their own way, away from ASEAN-led schemes, of influencing the situation.

But Russia and China, which have already strongly intimated they oppose any outside pressure on Myanmar except for ASEAN-led initiatives, could then take an opposing position and side with the junta to stymie Western interference in this part of the world, Driesmans said.

Food aid reliance is set to triple to 3.4 million people in Myanmar within months, the World Food Program has warned, as the country reels from a coup, endemic poverty and the COVID pandemic.