The events in Myanmar pose a challenge to the Association of Southeast Asian Nations, which is struggling to decide whether to stick to its principle of non-interference in members' internal affairs or not. 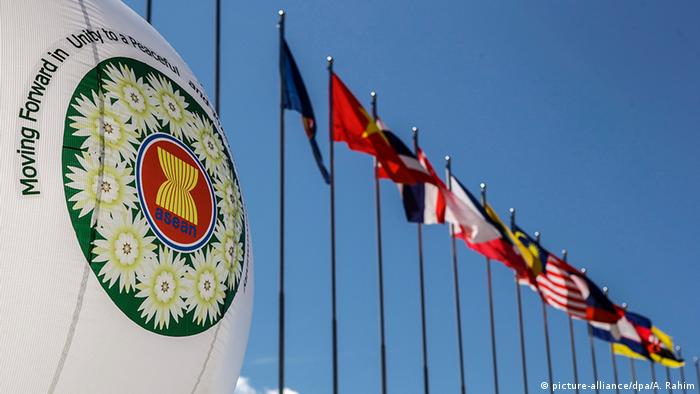 Since its founding in 1967, ASEAN has pursued behind closed doors and consensus-based diplomacy

After Myanmar's military dislodged the civilian government in a coup and took over power on February 1, nationwide protests and a mass campaign of civil disobedience ensued against the junta.

The military has carried out a brutal clampdown on the protesters.

As of March 26, 164 demonstrators had been killed, according to official figures. But as per data provided by the Assistance Association for Political Prisoners (AAPP), over 300 people had lost their lives.

There is no end in sight to the crisis, which poses several challenges for the Association of Southeast Asian Nations (ASEAN), a regional alliance.

Writing in the Bangkok Post, Thai political expert Thitinan Pongsudhirak even calls it an "existential crisis" for the grouping. 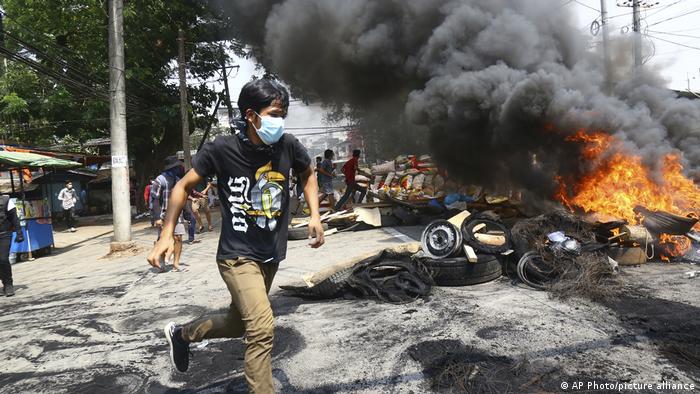 ASEAN's diplomacy and reputation put to the test

First, the diplomatic weight of the alliance is at stake. It would be a serious blow to ASEAN's importance if, for instance, the United States were to cancel its participation in the next East Asia Summit or ASEAN summit because it was not prepared to sit at the same table with Myanmar's generals.

Second, the reputation of the alliance is suffering. Images of nationwide mass demonstrations against the military regime and of demonstrators being killed and wounded are being circulated around the world. This is also tarnishing ASEAN's image. The bloc is already accused of not taking its own human rights charter seriously.

Third, a breakup of Myanmar, which is by no means ruled out, would endanger the stability of the entire region. People have already started fleeing to places like India and Thailand.

After the last violent crackdown on protests in 1988, 360,000 people fled to Bangladesh, China, India, Malaysia and, particularly, Thailand, according to a report by the International Commission of Jurists.

In an opinion piece for the Bangkok Post, former Thai Foreign Minister Kasit Pirmoya warned of a "refugee crisis" and destabilization of the border regions.

He added: "ASEAN not only has the right, but the responsibility, to act decisively and take concrete actions to ensure that Myanmar's generals end the violence, reverse their coup, respect the will of the people, and allow democracy to prevail in Myanmar."

Divided reactions to the coup

In contrast to the former foreign minister's clear appeal, Thailand's government, which itself came to power in a coup in 2014, has so far avoided criticizing the Myanmar military, calling the coup an internal affair of the country.

Vietnam, Cambodia and the Philippines have reacted in the same way. While the governments of Vietnam and Cambodia are authoritarian regimes themselves, Philippine President Rodrigo Duterte has declared war on democracy in his country.

Malaysia and Indonesia, on the other hand, took a stand against the Myanmar military junta and criticized the violence there. Malaysian Prime Minister Muhyiddin Yassin expressed his "disgust at the continuing deadly violence against unarmed civilians."

Indonesian President Joko Widodo called for an immediate end to the violence and announced that he would, together with Brunei, call a special meeting of ASEAN. Brunei is the current chair of the bloc.

"Dialogue and reconciliation must be carried out immediately to restore democracy, to restore peace and to restore stability in Myanmar," Widodo said.

A first in ASEAN's history

"This is quite a strong statement, especially considering ASEAN's usual 'quiet' and noninterference approach," Deasy Simandjuntak, an expert from the ISEAS-Yusof-Ishak-Institute in Singapore, told Malaysian newspaper The Straits Times.

Since its founding in 1967, ASEAN has pursued behind closed doors and consensus-based diplomacy.

With this approach, ASEAN succeeded, for instance, in convincing Myanmar to accept international aid in 2008 after the devastating cyclone Nargis, which claimed about 100,000 lives.

It was also ASEAN that admitted Myanmar to the club in 1997, despite international pressure not to do so. Becoming a member of the bloc contributed to the subsequent opening of the country.

Public criticism of Myanmar and the call for a summit that is primarily about a domestic political crisis in a member state is a first for ASEAN. Myanmar's military generals will certainly not be amused by the criticism coming now from some of the bloc's member states, as Thailand's generals were let off scot-free after the 2014 coup.

Another factor that complicates a dialogue with the generals is that it has so far been ASEAN's Muslim-majority countries that condemned the coup and crackdown in Buddhist-majority Myanmar. And these countries have already been critical of Myanmar's policies toward the Rohingya community.

This situation could lead to the junta foregoing some friendships. As the generals had previously stated at the United Nations: "We are used to sanctions, and we survived … We have to learn to walk with only [a] few friends."

No success without unity

So, the questions are, first, whether it will be possible to create the necessary unity within ASEAN so that the Myanmar generals cannot avoid dialogue even with their critics within the alliance, and, second, whether the confrontational approach, by ASEAN standards, would be more successful than the quiet diplomacy of the past. Both questions are interrelated.

With regard to the first question, an unnamed ASEAN diplomat told Japan's Asian Nikkei Review: ASEAN "is like a faulty Rubik's cube where it is impossible to get all the colors aligned on one side." ASEAN's disunity, in turn, diminishes the confrontational approach's chances of success.