Health care workers rallied at dawn in central Myanmar in a bid to avoid a confrontation with security forces. 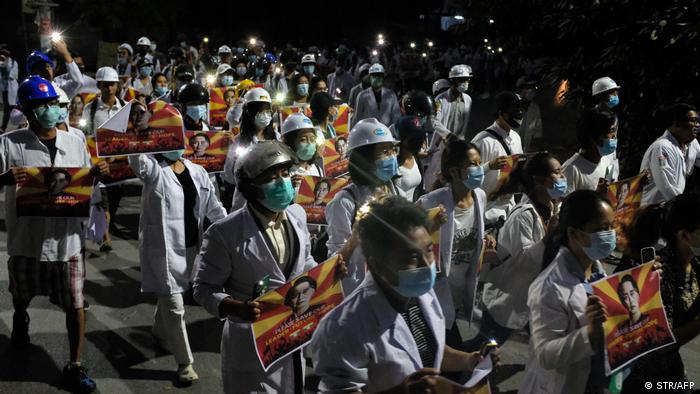 Doctors, nurses, medical students and pharmacists all took part in the dawn rally

With public protests growing increasingly dangerous, the protesters gathered early in the morning to curb the risk of fatalities at the hands of security forces.

Wearing white coats, about 100 doctors, nurses, medical students and pharmacists lined up on a main road in Mandalay to chant slogans and proclaim their opposition to the February 1 coup.

Myanmar has been in turmoil since soldiers ousted civilian leader Aung San Suu Kyi in early February. The coup reversed a transition towards democracy that appeared to be underway when Kyi's National League for Democracy party won a 2015 election after five decades of military rule

Victims shot in the head

While there were no fatalities at the Mandalay march, a man was killed in a separate demonstration in the city of Monwya and several were wounded.

Myanmar's independent Assistance Association for Political Prisoners has verified 247 deaths nationwide linked to the clampdown. However, the association reports that the true figure is likely far higher.

On Sunday, Australia's government confirmed that it was providing help to two citizens who were detained while trying to leave Yangon.

The two are understood to be business consultants Matthew O'Kane and Christa Avery, who is a dual Canadian-Australian citizen. The couple run a bespoke consultancy company. They were detained while trying to leave the country on a relief flight on Friday, and are now under house arrest.

Myanmar's protesters are not backing down despite the military's brutal suppression tactics. Only talks will deescalate the conflict, DW's Rodion Ebbighausen writes.