Myanmar coup: Mass protests fail to attract global solidarity | Asia | An in-depth look at news from across the continent | DW | 22.03.2021 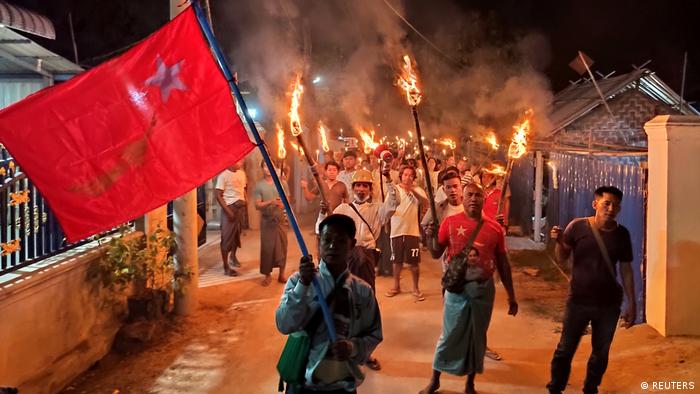 Protesters hold firelight as they join in nationwide night protest against the coup in Khin Oo, Sagaing region, on March 13

Since the military took over power in Myanmar on February 1, the country has seen sometimes deadly mass protests demanding the restoration of the civilian government and the release of political prisoners.

Despite the volatile situation, developments in the country have so far not dominated the international diplomatic agenda.

As far as what was made known publicly, the events in Myanmar were not part of the recent US-China meeting in Alaska, the first high-level talks between the two sides since President Joe Biden took office.

Still, according to experts at the United States Institute of Peace, a nonpartisan agency of the US Congress, Myanmar would present an excellent chance for cooperation between the two global powers.

"Myanmar may present a unique opportunity for the two powers — at odds on so much — to address in unison the growing international crisis radiating out of Myanmar," they said.

But at the Alaska meeting, China's top diplomat Yang Jiechi's called for the US to "stop advancing its own (notion of) democracy on the rest of the world."

The statement suggests that joint action by Washington and Beijing to resolve the crisis in Myanmar is rather unlikely.

The UN Security Council (UNSC) on March 10 managed to pass a resolution condemning the violence against peaceful protesters in Myanmar and pledging "continued support for the democratic transition" in the country.

It also stressed the "need to uphold democratic institutions and processes, refrain from violence, fully respect human rights and fundamental freedoms and uphold the rule of law."

Nevertheless, the UNSC failed to call the events in Myanmar a coup in the face of objections from China and Russia.

Michal Lubina, a political analyst at the Jagiellonian University in Krakow, told DW that there is scope for the West and Beijing to agree on the way forward in Myanmar.

"China would have rejected such a (UNSC) statement in the past without much ado. That it has not done so suggests that there are points of agreement with the West," he said.

Even though both sides have common interests in Myanmar, Lubina said, they do not cooperate enough because of the systemic and geopolitical competition between them.

"A common goal of the West and China is stability and an end to bloodshed," the expert pointed out, stressing that China has no interest in there being chaos in Myanmar. Beijing wants to build infrastructure and an economic corridor connecting it to India, all of which have become impossible for the time being.

"But, of course, it also wants to keep the West at arm's length," he underlined.

China's position on Myanmar, where distrust of Beijing runs high, is by no means uncontroversial. Beijing's hope of scoring points among the Myanmar public by supporting the UNSC's relatively clear statement appears to have fizzled out following arson attacks a week ago on several factories in Yangon belonging to Chinese investors.

It is unclear who was behind the arson attacks and to what extent they were connected to the current anti-coup protests.

But the reaction from the Chinese side was unambiguous.

The Global Times, the ultranationalist mouthpiece of the Chinese Communist Party, published a report and an opinion piece on the events. In the report, the Chinese Embassy in Myanmar demanded protection of Chinese assets and personnel.

The perpetrators, according to the newspaper, may have been anti-China elements "who have been provoked by some Western anti-China forces, NGOs and Hong Kong secessionists."

"For a long time, the West and some anti-China forces have been trying to make use of Myanmar as a strategic pivot to contain China," it added.

In the opinion piece, Global Times said: "It's well known that China doesn't interfere heavily in Myanmar situation, meanwhile it tries its utmost to promote peaceful settlement of the crisis according to law."

As reported by the English-language daily The Irrawaddy, a message in Burmese and Chinese was shared about a million times. It read: "We condemn the purely selfish statement of the Chinese Embassy in every way. China has so far remained silent and has not condemned the military coup, even though hundreds lost their lives during the peaceful protest."

The Chinese Embassy's statement has undoubtedly increased anti-Chinese resentment in Myanmar and complicated any possible moderating influence Beijing might have on the parties to the conflict.

Meanwhile, some of Myanmar's Southeast Asian neighbors, in a departure from their traditional restraint, have taken a stand for the first time.

Indonesian President Joko Widodo, for instance, called for an immediate end to the violence and announced that he would, together with Brunei, call a special meeting of the Association of Southeast Asian Nations (ASEAN). Brunei is the current chair of the regional bloc.

How much pressure ASEAN countries will be able to exert on Myanmar army's leadership remains to be seen. Police have used tear gas, while demonstrators have let off fire extinguishers, as here in Yangon on March 6

Sanctions have so far been imposed only by Western countries, primarily the United States. They are directed against individual members of the army as well as against certain ministries and companies controlled by the military. The measures include entry bans, asset freezes and the prohibition or restrictions on business relations with the individuals or organizations concerned.

On Monday, EU foreign ministers slapped sanctions on 11 officers of the Myanmar army and security forces, as well as against companies that generate revenue or financial support for the army.

At the moment, UNSC sanctions are considered unrealistic, given the readiness of China and Russia to veto any proposed measures.

Speaking to DW about the alleged crimes against humanity in the country, UN's special rapporteur on human rights in Myanmar, Tom Andrews, said that there needs to be a "collective response outside of the Security Council."

"If the Security Council can't impose focused, tough, clear sanctions on the military then a coalition of nations can."

However, this is likely to remain illusory, given the US-China antagonism, which was on open display at the recent Alaska meeting.