Myanmar: Over 100 killed in deadliest day since military coup

More than 100 people in Myanmar have been killed in a fresh crackdown on the protest movement. The leader of the military junta marked Armed Forces Day by promising new elections. 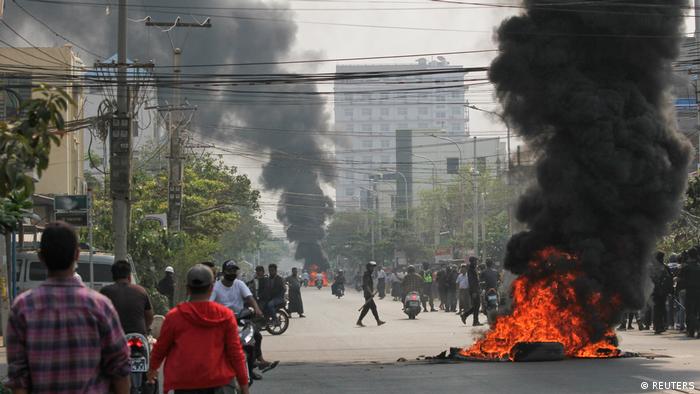 Myanmar's security forces killed over 100 pro-democracy protesters in the bloodiest day since the military seized power, as the junta staged a show of might on its annual Armed Forces Day.

The online news portal Myanmar Now reported late Saturday that the death toll across the country had reached 114.

"This violence is compounding the illegitimacy of the coup & the culpability of its leaders," it added.

The embassies of the European Union and the United Kingdom in Myanmar condemned the latest killings of "unarmed civilians, including children," describing them as "indefensible acts."

US Secretary of State Antony Blinken said the military had shown its willingness to "sacrifice the lives of the people to serve the few."

One activist in Mandalay told DW that soldiers were entering neighborhoods dressed as civilians "with concealed guns and weapons."

"They are not just cracking down on the protesters," said David, whose name has been changed for his own safety. "They are now entering the neighborhood and shooting and beating and looting everything that's in their sight."

"Every corner of the streets are being burned down," he warned.

The fresh crackdown came as Myanmar's military, the Tatmadaw, held the annual "Armed Forces Day" parade, using the occasion to condemn the opposition and to promise elections.

"The army seeks to join hands with the entire nation to safeguard democracy," General Min Aung Hlaing said in a speech broadcast on state television after the parade in the capital, Naypyitaw.

The parade was a show of force for the Tatmadaw, with military vehicles, firepower and soldiers marching in formation.

There were no signs of officials from other countries, although international guests are usually present at the parade.

Myanmar's military took over the country's democratically elected government in a coup on February 1, unleashing a massive protest movement against its rule.

Aung San Suu Kyi and other leaders from National League for Democracy (NLD) have been detained since the coup.

However, the Tatmadaw claims that the army had to seize power because of "unlawful acts" and corruption.

On Saturday, Min Aung Hlaing reiterated a promise to hold elections, without specifying a date.

"Violent acts that affect stability and security in order to make demands are inappropriate," he said in an earlier televised speech on Friday evening.

"You should learn from the tragedy of earlier ugly deaths that you can be in danger of getting shot in the head and back."

The death toll from the military crackdown reached nearly 400 on Saturday.

The violent response from the military leaders has drawn international condemnation and sanctions.

According to the Assistance Association for Political Prisoners (AAPP) activist group, which has been tracking killings of demonstrators in Myanmar, at least 25% of protester deaths have come from shots to the head.

This has raised suspicions that protesters have been deliberately targeted by security forces for killing.

Witnesses and local media have said at least 10 people have been killed during anti-coup protests across Myanmar. Meanwhile, a UN rights expert cited 'credible reports' that over 70 had been killed since protests began.

Myanmar's military says it has released more than 600 prisoners arrested on various alleged infractions since the February 1 coup.