Food aid reliance is set to triple to 3.4 million people in Myanmar within months, the World Food Program has warned, as the country reels from a coup, endemic poverty and the COVID pandemic. "More and more poor people have lost their jobs and are unable to afford food," said Anderson, depicting a "sharp" rise in "hunger and desperation." 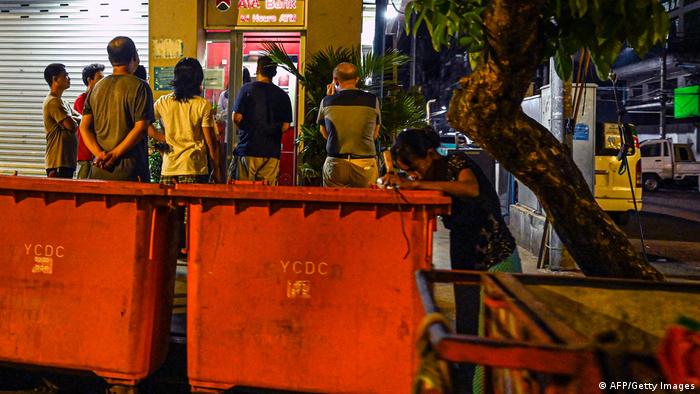 Yangon, April 2021: Searching a rubbish skip as hunger rises and earnings run out

Prices for staples — such as rice and cooking oil — had risen nationwide, especially in Myanmar's border areas of Chin, Kachin, Rakhine and Shan states.

For example, said Anderson, rice prices had soared by up to 43% in some townships of Kachin state and cooking oil by 32%.

Prices for fuel had increased by "roughly 30% nationwide," he said.

"The world must act immediately to address this humanitarian catastrophe," said Andrews.

On Saturday, a crisis summit of the South-East Asian Nation (ASEAN) grouping is planned in Jakarta but slammed by Human Rights Watch (HRW) for its inclusion of sanctioned coup leader, Min Aung Hlaing.

According to Reporting ASEAN, 38 media workers were also in detention.

Sleeping in caves, under banana trees

Unable to safely return home to tend their paddy fields, "you're looking at a six-month problem of no food," said Eubank.

Some displaced were sleeping in caves or under banana trees, he said.

Airstrikes in Kachin state in Myanmar's north have also displaced a further 5,000.

"We have difficulties with food storage,” Brang Shawng, a camp leader in Kachin state, told the French news agency AFP.

More than 2,000 ethnic Karen had crossed Myanmar's border into Thailand, said Padoh Mann Mann, a spokesman for brigade five of the Karen National Union, a rebel group long active in the mountainous region.

Junta forces have arrested 25-year-old opposition activist Wai Moe Naing after reportedly hitting him with a car, drawing a swift response from his supporters and the US government.

The EU has slapped sanctions on 10 Myanmar officials and two firms. The bloc wants Myanmar's military to negotiate an end to the violence, according to Germany's top diplomat.