Junta forces have arrested 25-year-old opposition activist Wai Moe Naing after reportedly hitting him with a car, drawing a swift response from his supporters and the US government. 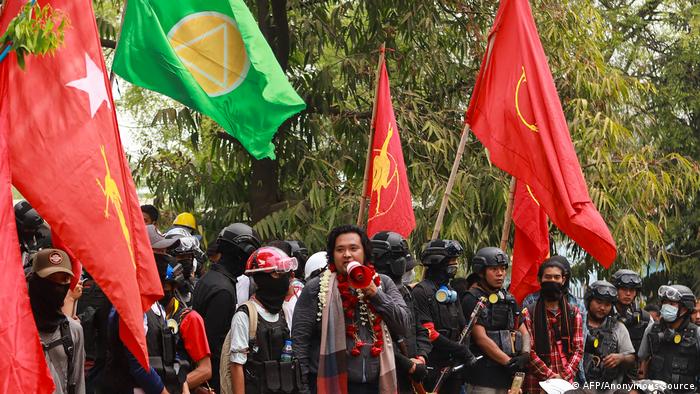 Wai Moe Naing speaks to demonstrators during a protest in Monywa, northern Myanmar

One of the most high-profile activists protesting against Myanmar's military junta was arrested on Thursday by security forces as a violent crackdown on opposition movement continues.

Wai Moe Naing, a 25-year-old Muslim man, was reportedly hit by an unmarked police car as he led a protest on his motorbike in the northern city of Monywa, and then was detained by the security forces. Twitter users called for his release with the hashtag #FreeWaiMoeNaing.

Security forces have not yet specified under which charges Naing was arrested.

"This appalling act further demonstrates why the people of Myanmar do not accept the military regime," the US Embassy tweeted in response to the arrest.

"We call for the release of the more than 3,000 people detained by the regime, and we support the people striving for democracy."

The arrests come as the EU is reportedly preparing new sanctions that will target 10 further individuals linked to the coup, along with two companies run by Myanmar's military, two European diplomats told Reuters news agency.

The diplomats said the the measures could take effect next week.

Western countries, including the US, UK and Germany, have widely condemned the coup and expressed solidarity with ousted democratically-elected leader Aung San Suu Kyi.

Myanmar: No time for celebration

Myanmar's military has also cracked down on the opposition working in western countries. The junta took over Myanmar's embassy in the UK over critical remarks from ousted ambassador Kyaw Zwar Minn.

Kyaw Zwar Minn is now locked out of the embassy, and called for help from the British government on Thursday, as he is facing eviction from his London residence. He reportedly had to spend a night in his car after the military barred him from his residence.

Speaking from behind the padlocked gates of his residence in northwest London, he told reporters, he is "not going to go today'' and intends to stay despite orders to move out.