The EU has slapped sanctions on 10 Myanmar officials and two firms. The bloc wants Myanmar's military to negotiate an end to the violence, according to Germany's top diplomat. 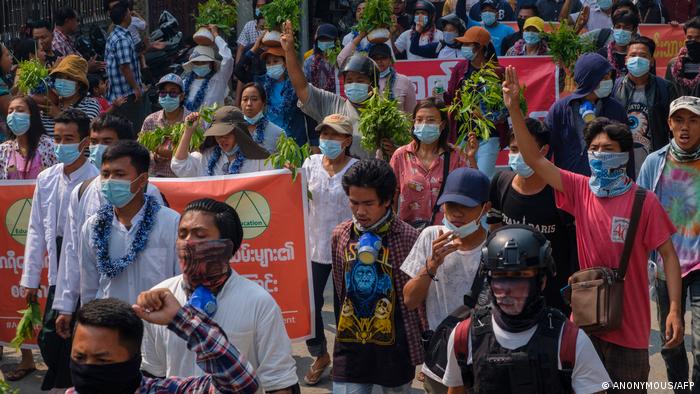 Protests have been held across Myanmar for months

Maas was speaking after a virtual meeting of his EU counterparts in which the bloc decided to slap new measures on the southeast Asian nation.

They affected 10 officials and two companies linked to the crackdown that has seen more than 700 people lose their lives.

"The military regime is continuing its course of violence and maneuvering the country into a dead end. That is why we are increasing the pressure to bring the military to the negotiating table," Maas said.

Earlier this month, the top diplomat warned of the threat of a possible civil war in Myanmar.

In its firmest EU response yet to the ousting of an elected government led by Nobel peace laureate Aung San Suu Kyi, the EU said nine members of the junta's State Administration Council, formed the day after the coup, had been targeted with travel bans and asset freezes.

Information Minister U Chit Naing has also been added to the bloc's sanctions list.

Which companies are being sanctioned?

The two firms hit with asset freezes and visa bans were the Myanmar Economic Corporation (MEC) and Myanmar Economic Holdings Ltd (MEHL) which dominate sectors including trading, alcohol, cigarettes and consumer goods., according to the EU's official journal.

It bars EU companies and individuals from doing business with them, dealing a potentially heavy economic blow to Myanmar's rulers.

The US and Britain, the former colonial power, have already imposed sanctions on the MEC and MEHL, and Washington has hit Myanmar's state gem company as well.

What has been happening in Myanmar?

Mass protests have been taking place across Myanmar since February, with the army responding with an increasingly brutal crackdown.

According to the Assistance Association for Political Prisoners activist group, 737 people have been killed by security forces since the coup and 3,229 remain in detention.

The armed forces claim there had been widespread fraud during a general election late last year.

The vote had returned elected leader Aung San Suu Kyi and her National League for Democracy (NLD) party to power.

Election officials have denied the military's claims, saying there is no evidence to support them.