The battle for Myanmar plays out on Twitter, TikTok and Telegram | Asia | An in-depth look at news from across the continent | DW | 20.04.2021 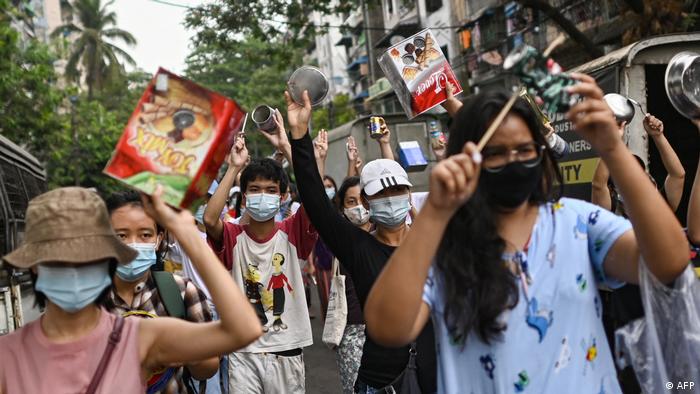 Thinzar Shunlei Yi is one of the few pro-democracy activists in Myanmar who is willing to do on-the-record interviews.

But while her identity may be known, her location and data are protected by layers of security protocols.

Even before the coup on February 1, she and many activists have had to adapt in order to protect themselves and the information they are trying to get out of Myanmar from military censors.

Thinzar Shunlei Yi said she has been targeted by online attacks in the past, and that maintaining digital security has always been important.

Young activists in Myanmar came of age during almost ten years of semi-democratic rule when they had full access to the internet.

However, the constant threat of military surveillance of internet data and social media content has led many people to use tools like Virtual Private Network (VPN) apps, encrypted messaging services and anonymous browsers in order to communicate and post content without fear of detection or arrest.

According to the Assistance Association for Political Prisoners Burma (AAPPB), a Thailand-based human rights organization, more than 3,600 people have been arrested, charged or sentenced since Myanmar's military, the Tatmadaw, took power in February.

Many face up to 20 years in prison for inciting hatred towards the military and three to seven years for stirring up fear or unrest in public. Hundreds more have been killed.

"People are paying the price almost every day on the street," said Thinzar Shunlei Yi. "Myanmar people feel that we have nothing more to lose."

In the days following the coup, scores of people in Myanmar took to social media to share their shock and anger.

In the days that followed, activists, citizen journalists and concerned citizens stepped away from Facebook to platforms like Twitter and TikTok. Many people were wary of the military monitoring and spreading false information on Facebook.

Phone calls and text messages moved to encrypted messaging services like Signal or Telegram. When the internet was completely blocked, people used the telephone.

A broader civil disobedience movement soon went online, with platforms used to organize boycotts and strikes. Activists say they will continue protests against military rule, and will use social media to broadcast their message to an international audience.

"The thing is that with citizen journalists, we are everywhere. We all have our digital devices and we can all still find an internet connection," said Thinzar Shunlei Yi.

The number of Twitter users in Myanmar grew from an estimated 190,000 in December 2020 to 1.2 million in March 2021, according to numbers on StatCounter and DataReportal.

As the protests grew in intensity, Twitter was now being filled with images and videos using the hashtag #WhatsHappeningInMyanmar.

Others moved to TikTok and started posting live and recorded videos of clashes between protesters and police, and tributes to those killed. The hashtag #savemyanmar has been used 1.4 billion times on the platform.

Playing cat and mouse with censors

The military has reacted to the rise in pro-democracy content by continuing to disseminate fake news on Facebook, while arresting prominent social media influencers who dare to speak out.

The military regime has also progressively shut down internet access across Myanmar while trying to block access to social media sites.

Only broadband-based internet connections at homes and offices remain online as the military tries to keep the economy going.

Michael Hull, the president of the Psiphon Inc, the company that makes the censorship circumvention app Psiphon, has been monitoring the situation in Myanmar.

According to company data shared with DW, the use of the Psiphon app increased from around 6,000 daily users just before the coup to almost 2 million users within 48 hours after the coup.

During the next few weeks, Psiphon was the number one downloaded app in Myanmar as more and more people needed the technology to access blocked sites.

"This has been a universal response to shutdowns regardless of where people are around the world," Hull told DW.

"Populations are capable of not only reacting but communicating to each other the information needed to get people back online," he added.

Psiphon, which is available in Burmese, works by encrypting the data coming from the device and allows users to access blocked content – like social media sites – through a variety of technologies and by routing the data through a network of servers around the world.

Even with all the barriers that currently limit how internet can be accessed in Myanmar, Hull said that 600,000 people a day are still using Psiphon to access blocked sites while connected to a wired broadband connection.

"During initial phases, internet service providers that are implementing these shutdowns are not very sophisticated and Psiphon is easily able to circumnavigate any kind of large-scale blocking," said Hull, adding that the company monitors and adjusts its technology as censors get more sophisticated.

In Myanmar, even having Psiphon or other circumvention apps installed on a smartphone can be a reason for arrest. There have been reports of police stopping people to check devices.

Protesters are now encouraging each other to leave their phones at home or to delete incriminating photos or apps.

Justice for Myanmar (JFM), a group that monitors abuses by the military, accused the Tatmadaw of mass violations of human rights and using the internet shutdowns to censor and surveil citizens and activists. The group's own website was blocked by the military in 2020.

Activist Thinzar Shunlei Yi said protesters are finding creative means of getting their content online, and that grassroots movements for change are also a cry for help to the international community.

"If we don't act right now, [the Tatmadaw] will inspire many more brutal dictators around the world," she said. "It is our duty to defend democracy."

International broadcasters, including DW and the BBC, have been working with Psiphon for years to develop technologies that allow users living in countries with internet censorship to access reliable news content. A Psiphon function is now integrated into DW’s Breaking News App.

If you experience problems while browsing dw.com from a region where internet access is restricted, consider using the DW app or the Psiphon application. To add the DW Psiphon app, send an email to dw-w@psiphon3.com for a download link. If you use Psiphon via DW, you will first be redirected to DW's website. From there, you can continue onward to any other website.