Myanmar: Civil servants face junta pressure to return to work | Asia | An in-depth look at news from across the continent | DW | 19.04.2021

Workers associated with the civil disobedience movement have been thrown out of public housing and issued legal notices. Meanwhile, many banks are also grappling with a lack of working employees. 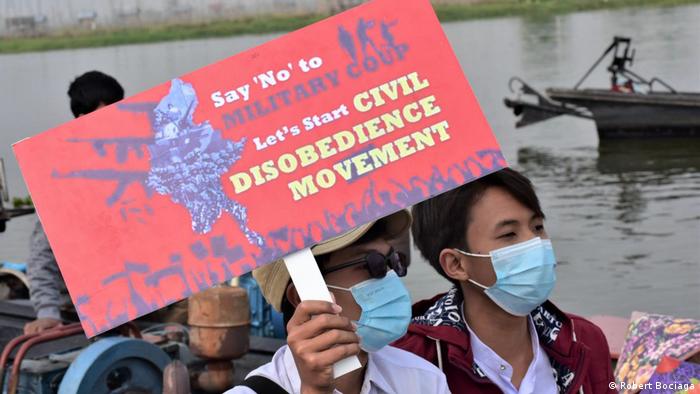 Protesters call for a civil disobedience movement in Myanmar

As the civil disobedience movement (CDM) grows in popularity in Myanmar, the military has started ramping up pressure on government employees to return to work, while businesses struggle under the weight of missing employees and internet blackouts.

Civil servants started refusing to carry out their duties, just days after the February 1, 2021, coup, when the country's military seized power. The movement has been expanding since then, with widespread support from both in and outside the country, and a 2022 Nobel Peace Prize nomination.

However, the junta has been pushing government workers participating in the movement to go back to work, using forceful tactics. In one case, government hospitals in cities began issuing letters to medical workers to come back to work. In another instance, a CDM-affiliated railway worker was forced to leave his government apartment.

Doctors pressured to return to hospitals

One doctor working at a government hospital said the junta is afraid of the CDM's power.

"The CDM is one of the most important things to stop the government mechanism," a 25-year-old assistant surgeon, who asked for his name not to be published, told DW. "That's why they try to push CDM participants back to work in various ways, like forcing railway staff to leave their government apartment if they don't come back to work."

A military spokesperson last week accused CDM-affiliated medical workers of being responsible for the deaths of people in hospitals, who could not receive proper treatment.

The surgeon, who is working at Myanmar's largest hospital — the Yangon General Hospital — disagrees with that accusation. "They want to open public hospitals again as soon as possible, and mislead people into thinking that the country is stable, and that they can get back to their normal lives. That's why they are still pushing healthcare workers to return to their jobs, by accusing them of committing genocides in the newspaper."

On Tuesday, the junta issued arrest warrants for 20 doctors who had joined the CDM against the military dictatorship, charging them with defamation.

The surgeon told DW that doctors are preparing for the worst. "I am not afraid of them. It doesn't matter, even if they revoke my medical license. I will be a part of the CDM until the end of the junta," he said.

Cash flow comes to a halt

"Businesses were hurting because of the pandemic, even before the coup. Any business would be lucky to break even, and many have closed," said political analyst Dr Khin Zaw Win, who runs an independent think-tank in Myanmar called the Tampadipa Institute.

"The movement aims to disrupt the government machinery and does not force essential services to stop operating," he told DW.

Cash flow within the country has also come to a halt, since banks have not been opening due to a shortage in staff. Many people are lining up at ATMs, mainly in the big cities like Yangon and Mandalay.

"Banks are a good example — many staff have joined the CDM, and the junta is affected. But some banks are providing services to customers with a skeleton staff," said Khin Zaw Win.

However, the Central Bank of Myanmar last week said that the private bank sector is still strong, and that customers can trust them.

"All of our work has stopped because customers don't want to spend on extra things. We can't receive payments from our customers because the banks are closed," said 36-year old businessman Hla Win, who declined to use his real name, and who runs a mobile accessories company in Myanmar.

The internet has been shut down in the country by the military in order to control the growing anti-coup movement, and mobile data has been inaccessible since March.

"No banks are open and there is no internet for people living in small cities who want to use internet banking," he told DW. "We were still able to run virtual sales before, but this coup stopped everything."

According to the Assistance Association for Political Prisoners (Burma), at least 737 people have been killed by the junta as of April 19.

As the people of Myanmar mourn the civilian deaths, many decided not to celebrate the New Year festival, also known as the Thingyan Water Festival, which took place from April 13-17.

However, social media videos showed junta members celebrating with joy, and spraying water in the capital Naypyitaw on April 14.

Elected leader Aung San Suu Kyi was arrested on February 1, triggering a wave of anti-coup protests. She is facing six charges set by the military. In addition to several deaths, over 3,200 people have been arrested, charged or sentenced for their role in the protests.