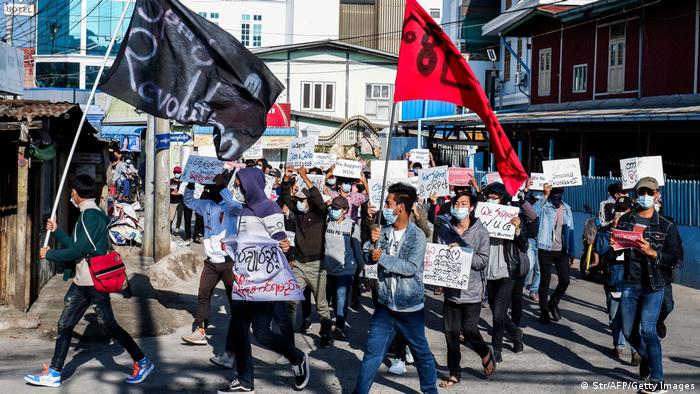 Protests are continuing over three months since the military seized power in Myanmar.

Thousands of anti-coup protesters took to the streets across Myanmar on Sunday, calling for a "spring revolution" as the country began its fourth month under a military regime.

Cities, rural areas, remote mountainous regions and even the country's rebel-controlled border territories have witnessed protests against the junta.

The unrest that has ensued has shown no signs of abating and on Sunday demonstrations kicked off early in the commercial hub of Yangon, as organizers called for "the global Myanmar spring revolution."

Yangon was not alone as protests took place across the country.

The central Mandalay region saw hundreds take to the streets, led by monks in saffron-colored robes, brandishing the flag of Suu Kyi's National League for Democracy.

In northern Shan state, youths carried a banner that read: "We cannot be ruled at all."

And in Shan's Hsipaw township violence erupted when security forces cracked down on protesters, killing at least two people. Some youths gathered on a street corner in Hsipaw before marching down the streets in a flash mob, dispersing as authorities clamped down on the dissent.

The junta has aimed to quell the unrest through a brutal crackdown that has resulted in widespread arrests and a death toll that now exceeds 700.

Also on Sunday, two people were shot and killed in the central town of Wetlet, the Myanmar Now news outlet reported.

One person was also killed in the northern jade-mining town of Hpakant, according to the Kachin News Group.

Myanmar's military junta announced that it will pardon hundreds of prisoners, including 42 foreigners, as the country marks the Buddhist new year. But political prisoners are reportedly not included.