Myanmar's junta chief will be replaced by a non-political representative at a summit of southeast Asian nations later this month. ASEAN has grown frustrated about the crackdown following February's military coup. 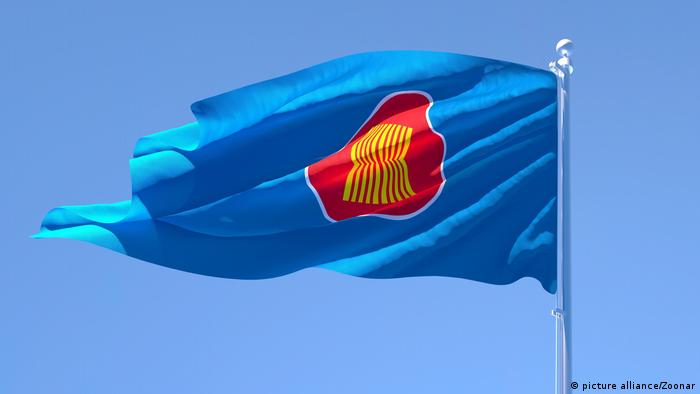 The decision marks a shift for ASEAN, which has traditionally favored a policy of engagement and non-interference

A non-political representative from Myanmar will be invited to an upcoming ASEAN leaders summit later this month, Brunei said Saturday, effectively sidelining the leader of a military junta that seized power earlier this year.

The decision follows the failure of Myanmar's army to adhere to a peace road map it had agreed to with the southeast Asian bloc following the coup in February.

Zaw Min Tun, a spokesman for Myanmar's military junta, blamed "foreign interventions," and placed the blame for his country's exclusion in the upcoming summit on pressure from the US and the EU.

More than 1,000 civilians have been killed by security forces and thousands have been arrested, according to the United Nations, during strikes and protests over the coup.

The takeover ended a decade of tentative democracy in Myanmar and prompted international condemnation and sanctions.

What have ASEAN ministers agreed?

At an emergency meeting late Friday in Brunei, foreign ministers of the regional bloc agreed that Min Aung Hlaing will not be invited to the October 26-28 summit.

ASEAN said in a statement that some member states recommended giving "space to Myanmar to restore its internal affairs and return to normalcy."

Instead, it was decided "to invite a non-political representative from Myanmar" to the summit, "while noting the reservations from the Myanmar representative," the statement added.

Brunei said some member states had received requests from Myanmar's National Unity Government, formed by opponents of the junta, to attend the summit.

Why has ASEAN acted now?

Myanmar, which is a member of the ASEAN regional group, agreed during emergency talks in April that it would adhere to a peace plan aimed at tackling the fallout from the coup and ending the bloody violence.

ASEAN's statement Saturday cited "insufficient progress" in the implementation of the five-point plan.

A long-planned visit by ASEAN's envoy to Myanmar, Erywan Yusof, has also been delayed in recent weeks.

Erywan has insisted on meeting all parties, including deposed leader Aung San Suu Kyi, who has been detained on various charges since the coup.

Junta spokesman Zaw Min Tun said this week that Erywan would be welcome in the country but would not be allowed to meet Suu Kyi.

International pressure has been building on ASEAN to take a tougher position on Myanmar's failure to take the agreed steps to end the violence, allow humanitarian access and start dialogue with its opponents.

The decision marks a shift for ASEAN, which has traditionally favored a policy of engagement and non-interference.

The bloc has long been criticized for being toothless and for failing to rein in members whose leaders have been accused of atrocities, subverting democracy and persecuting political opponents.

Life of Myanmar refugees in an Indian border village

The number of people fleeing Myanmar has increased in recent weeks as fighting between the military junta and opposition forces intensifies. DW met with some of those who have left their homes.

Most of Thantlang's 10,000 people have escaped amid fighting between the military and the anti-junta movement. The resistance fighters claim 30 soldiers have been killed.