Talks between foreign ministers of the G7 nations have drawn to a close in the German city of Lübeck. Key topics at the meeting included the Ukraine crisis, Iran's nuclear deal and conflicts in the Middle East. 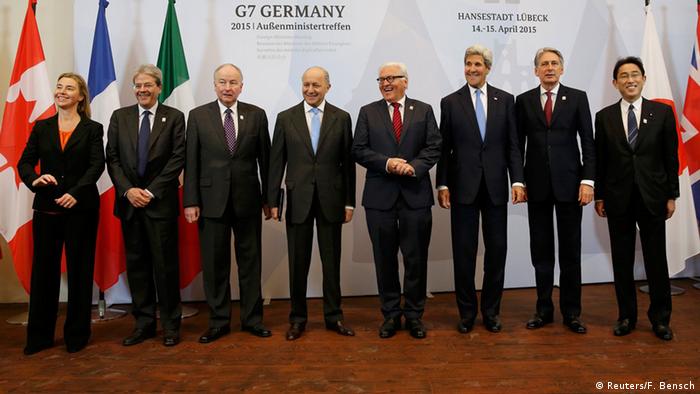 The G7 foreign ministers ended talks after just under 24 hours in the northern German city. The meeting intended to set the groundwork for the G7 summit of heads of state and government in Bavaria in June. But the main focus over the past two days - for ministers from the US, France, Britain, Germany, Italy, Japan and Canada - has been the conflict in eastern Ukraine and the situation in the Middle East.

During the talks, the seven foreign ministers agreed that further sanctions against Russia, in response to its support of separatists Rebels in eastern Ukraine, should only be enforced if a full implementation of the Minsk Agreement is repealed.

"We expect in particular Russia to use its considerable influence over the separatists to meet their Minsk commitments in full," the G7 foreign ministers said in a statement. 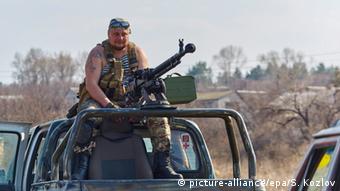 Russian return to the G8?

Both the Ukraine military and the pro-Russian separatists were asked, however, to end the on-going Ukraine conflict by fully assuming their responsibility and implementing their commitments under the Minsk agreement, which was signed in February.

As talks came to an end on Wednesday, German Foreign Minister Frank-Walter Steinmeier also addressed Russia's exclusion from the meeting.

"I've no interest and, as far as I know, nobody else has an interest in isolating Russia," Steinmeier said, adding that he would like Russia to become part of the G8 again, saying that implementing the Minsk accord was the way to achieve this.

Also on the agenda in Lübeck was the framework deal with Iran over its nuclear program, agreed in Switzerland almost two weeks ago. The framework for a final accord, due for the summer, was welcomed by foreign ministers from the G7 nations who prompted Iran to cooperate with the International Atomic Energy Agency (IAEA).

"An Iran without nuclear weapons remains the goal," Steinmeier said. "We all hope that if after 12 years of dispute with Iran is resolved, then this may be an incentive to resolve other conflicts."

The group also implored the government in Tehran to help bring to an end the conflicts in Syria and Yemen by finding a political solution. Houthi rebels in Yemen, who are believed to be backed by Iran, are in open combat with a military coalition led by neighboring Saudi Arabia, which intervened on behalf of Yemen's official government. 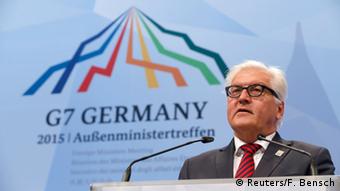 On Tuesday, the UN Security Council reached a decision to place an arms embargo on Houthi rebel leaders in Yemen.

The G7 countries also made clear at the talks in Lübeck that they stood firmly behind Yemen's President Abed Rabbo Mansour Hadi who fled a presidential compound in Aden last month for the Saudi capital, Riyadh.

The G7 advocated a national unity government for the country.

Human rights were also on the bill this week, with the G7 countries emphasizing the need to eliminate any form of discrimination. Violence against women and girls came under particular scrutiny at the meeting. 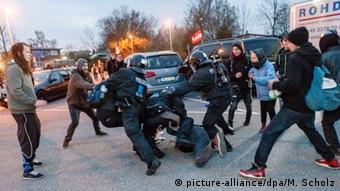 Sixteen protesters were arrested in Lübeck on Tuesday

"We stress the need for women's full participation in all political, governance and security structures and at all levels of decision‑making processes, recognizing that gender equality and women's empowerment contribute to the stabilization and prosperity of societies," the foreign ministers said.

The G7 ministers also reaffirmed their pledge to help African states in building effective health systems. Regional expert groups and an early warning system for epidemics will be established, particularly in light of the Ebola outbreak in West Africa. Plans will also be made to provide more effective border control in a bid to prevent the spread of diseases.

For the first time, the G7 foreign ministers also addressed the issue of maritime safety, saying they were committed to binding rules in order to protect trade. There were also calls for a code of conduct, particularly between China and its neighbors in the disputed South China Sea.

The seven countries also called for tougher measures in the fight against illegal fishing, with proposals including the obliged registration of all fishing vessels worldwide.

Some 3,500 police officers were deployed in the quiet Hanseatic town of Lübeck ahead of the G7 meeting, with many local businesses also staying shut.

The closures came in anticipation of demonstrations from political and environmental groups against the foreign ministers' meeting and avoid a repeat of the riots which marred an otherwise peaceful "Blockupy" demonstration in Frankfurt last month. Sixteen demonstrators were taken into custody following protests in Lübeck on Tuesday.

Foreign ministers of the G7 nations are meeting in Lübeck. Germany's Frank-Walter Steinmeier began by signing the book of condolence for Günter Grass, but serious business awaits him, DW's Bettina Marx reports. (14.04.2015)