Leaders of the world's wealthiest economies are holding a video conference to discuss how to beat coronavirus and reboot the global economy. Hosts Saudi Arabia have faced criticism over their human rights record.

German Chancellor Angela Merkel urged G20 leaders to remain united in the fight against coronavirus on Saturday, telling a virtual summit that more needs to be done to beat the pandemic.

Merkel was speaking during a meeting hosted by Saudi Arabia with heads of state and government from the world's wealthiest economies.

"If we stand together worldwide, we can control and overcome the virus and its consequences. Therefore more effort is worthwhile," she said in a video message.

Angela Merkel: We need to sustainably strengthen the WHO

Merkel said this was a global challenge that can only be overcome by working with international organizations such as the World Health Organization, the United Nations and the G20, adding that leaders needed to stump up more money for poorer nations to access vaccines.

Her words were echoed by French President Emmanuel Macron, who also addressed leaders.

"Today we are facing a health crisis that threatens the lives of millions of people," Macron said. "But there can be no efficient response to this pandemic if it is not global, coordinated and based on solidarity."

The two-day summit is being held virtually by hosts Saudia Arabia owing to the coronavirus pandemic. It is expected to end Sunday with a joint statement from the participants.

High on the agenda is the purchase and global distribution of vaccines, drugs and tests for low-income countries that cannot afford such expenses themselves.

The European Union wants the G20 to invest $4.5bn (€3.7 billion) to help, as well as agreeing new global standards for tackling pandemics.

"The G20 committed in March to do whatever it takes to overcome the pandemic and protect lives and livelihoods," UK Prime Minister Boris Johnson said in a statement. "We must hold ourselves to account for that promise."

While the global economy is recovering from the depths of the crisis earlier this year, momentum is slowing in countries with resurging infection rates, the recovery is uneven and the pandemic is likely to leave deep scars, the International Monetary Fund said in a report for the G20 summit. 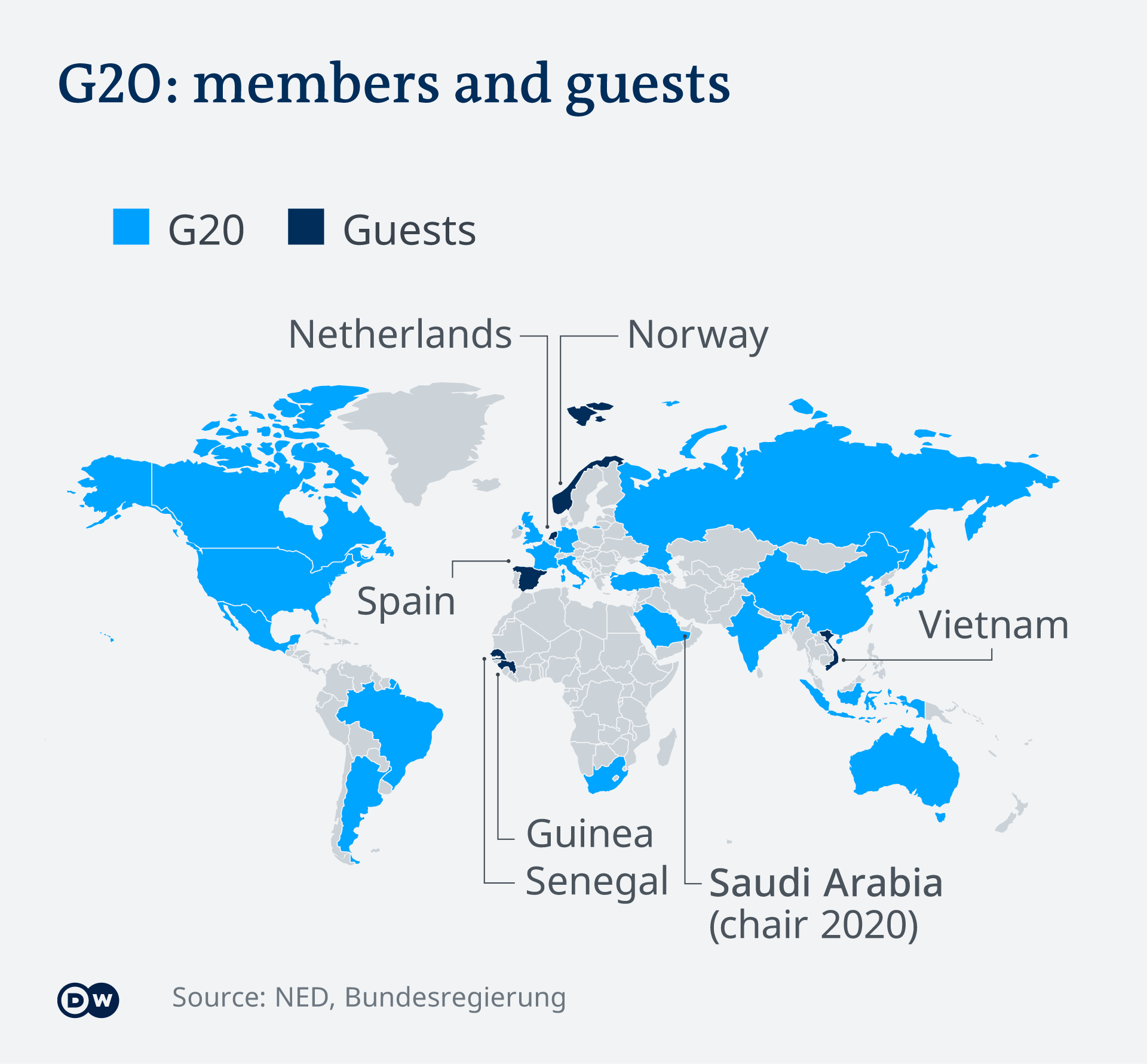 Climate change was also expected to top the agenda, with the change of US leadership raising hopes of a more concerted effort at G20 level to fight global warming.

Following the example of the EU, already half of the G20 members, including Japan, China, South Korea and South Africa, plan to become carbon-neutral by 2050 or soon after.

Under Trump, the US pulled out of the Paris Agreement on fighting climate change, but the decision is likely to be reversed by President-elect Biden.

European nations in the G20 want to speed up reform of the World Trade Organisation (WTO), hoping to capitalise on the upcoming change of US administration. Trump favored bilateral trade deals over working through international bodies.

G20 ministers meet for final day of talks in Japan

King Salman: COVID-19 has forced us to adjust our focus rapidly

Germany: Human chain against weapons exports outside Bundestag 2h ago

Brexit: 'Feasible' solution to deadlock eludes EU and UK after call 3h ago