Frontex-Director Fabrice Leggeri: ′Border control itself is not a panacea′ | Europe | News and current affairs from around the continent | DW | 19.08.2017

Frontex-Director Fabrice Leggeri: 'Border control itself is not a panacea'

Rescue operations are "the obligation of all those who are at sea," says the EU's border control boss. In a DW interview, he describes the huge challenges the EU faces in a situation that means life or death every day. 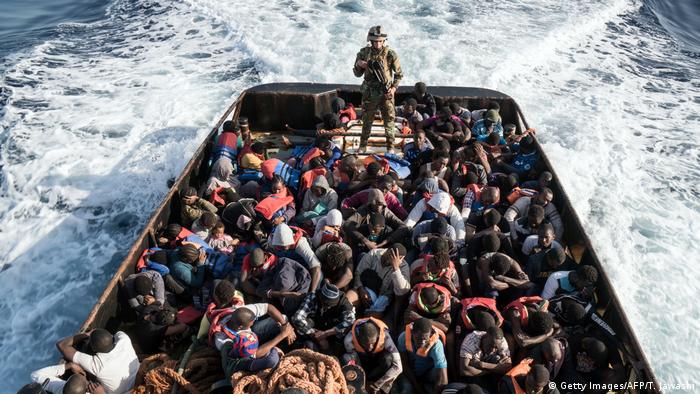 Deutsche Welle: The Libyan government announced that it will expand its coast protection area and would not permit humanitarian aid workers to enter the security zone. Who will save the refugees now when their boats sink, Frontex?

Fabrice Leggeri: I think it is very is important to understand that Frontex does not replace border control duties of the national authorities, but instead, we provide additional technical assistance to those countries that face an increased migratory pressure. In Italy Frontex currently deploys 13 vessels, 3 helicopters, 2 aircraft and 450 border and coast guard officers who assist the Italian authorities with border surveillance, Search and Rescue, identification and registration of the migrants in various hotspots across Sicily as well as intelligence gathering about the smuggling networks operating in the countries of origin and transit. We can adjust the operational levels if needed and if so requested by the Italian authorities with special attention to the protection of vulnerable groups and referral to the asylum authorities.

There is no question about the fact that Search and Rescue is the obligation of all those who are at sea and for Frontex it is a task we take very seriously – last year alone Frontex-deployed assets contributed to the rescue of 90 000 people in Italy and Greece alone and we continue to provide support with border surveillance and search and rescue.

But it is important to understand that border control itself is not a panacea, but that only a global solution can be effective to manage these flows.

Should humanitarian aid organizations be more present in regions like Yemen, Uganda, Sudan instead of the Mediterranean Sea?

Frontex is an operational, not political organization, and our role is to provide technical assistance to those countries which face an increased migratory pressure. As I responded before: Search and Rescue is not only a legal obligation, but it is also a duty of all those who are at sea. There is no doubt that the smugglers are taking advantage of the tragedy of the refugees and migrants and are profiting heavily from their desperation; In 2015 it is estimated they profited between 4 – 6 billion euros from their dirty business. The situation at all external borders of the EU –  not only in Italy, but also increasingly in Spain and in Greece, remains very difficult and while not being one organization, the smugglers operating in Morocco, Algeria, Libya, Egypt and Turkey seem to have one thing in common: little concern for the safety of the migrants, putting 150 migrants on board of boats which should not be carrying more than 10, in difficult weather conditions. These often capsize shortly after leaving the shores of these countries resulting in terrible tragedies.

The solution to the current situation must consist of many elements, not one: eliminating the root causes of migration: wars, conflicts, poverty and famine, dismantling the ruthless criminal networks which are taking advantage of the desperate situation the migrants are in and, lastly opening up of legal channels allowing the refugees to apply for asylum without having to put themselves in the hands of the traffickers. But we all know there are many challenges related to these. Frontex has contributed to the arrest of some 600 suspects of smuggling and human trafficking and we will not tire to do more to disrupt these criminal activities.

In order to assure security management of European borders, Frontex has to cooperate with governments from neighbouring countries of the EU which are not sharing the same values. Where is the limit for cooperation?

Cooperating with countries outside the EU is an integral part of Frontex's mandate. Frontex has concluded working arrangements with the authorities of 18 countries. The primary objective is to share EU best practices, train the border guards of non EU countries how to conduct border control in full respect of fundamental rights. We concentrate on what can be improved.

We aim to intensify existing bilateral cooperation with EU's neighboring countries, as well as with countries of origin and transit for irregular migration. Frontex cooperates with law enforcement authorities, provides trainings to officers, organizes workshops, shares risk analyses to strengthen the border control capacities of the non-EU countries.

Last year, as part of the extended mandate of the European Border and Coast Guard Agency, Frontex has started deploying liaison officers to third countries. At the moment we have a liaison officer in Turkey, Serbia and Niger. Their task is to monitor the migratory situation in the countries and strengthen the cooperation between host countries and Frontex.
Read more: 'There should be a European naval aid unit'

In order to fulfill his mandate, Frontex is getting enough support from Brussels and EU members?

Responding to the unprecedented migratory situation in 2015, the European Commission on 15 December of the same year, presented a legislative proposal for the creation of a European Border and Coast Guard. It proposed creating a new agency on the existing structures of Frontex, to meet the new challenges and political realities faced by the EU at its external borders, especially related to migration and internal security.

The proposal was approved by the European Parliament and Council in a record time of just nine months, the new European Border and Coast Guard Agency was officially launched on 6 October 2016, giving Frontex a new and broader mandate. This clearly proves the strong commitment of European policymakers to strengthen the agency and to give us wider tasks, including the fight against cross-border crime and providing security within the Union.

Frontex currently deploys some 1,800 border and coast guard officers who work at external borders – not only along Europe's maritime borders, but also at land and at many international airports. These officers are deployed by 28 EU member states and four Schengen associated countries. We do see an important commitment not only from Brussels, but also from the European capitals with which we work very closely.

This email interview was conducted by Astrid Prange de Oliveira.