From Haiti to Madagascar: The world′s forgotten crises | World| Breaking news and perspectives from around the globe | DW | 21.02.2019 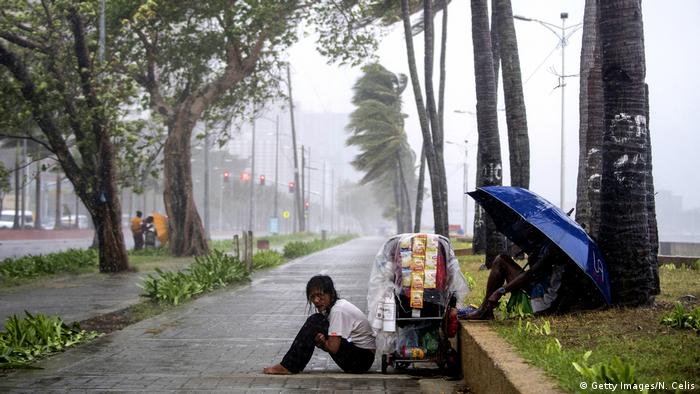 Floods, drought, hunger, violence and displacement: Many countries were hit by natural disasters and man-made crises last year. While the war in Yemen, the supply crisis in Venezuela and the wildfires in California repeatedly made international headlines, disasters that were just as terrible or worse unfolded away from the limelight.

The reasons for this lack of coverage include the ability for media to access certain crisis areas as well as dwindling budgets for journalists — "a real challenge for foreign reporting," according to the "Suffering in Silence" study by the Care International nongovernmental organization. The study presents the humanitarian crises that "received the least media coverage" in 2018.

In cooperation with the Meltwater media monitoring service, Care evaluated more than 1 million online articles in English, German and French published between the beginning of January and the end of November 2018. The study examines the frequency with which crises affecting at least 1 million people were mentioned in online media. Television and radio reports or content produced for social media platforms were not included. Despite the limitations in terms of the languages and the media chosen, the results showed "a clear trend," according to the authors of the study.

Here are the five most underreported crises in 2018:

Burning cars, street barricades, deaths: The violent protests against the government have recently brought Haiti back into the global limelight. The 2018 food crisis in the country — exacerbated by a late harvest in the wake of a drought at the start of the year — received much less attention. 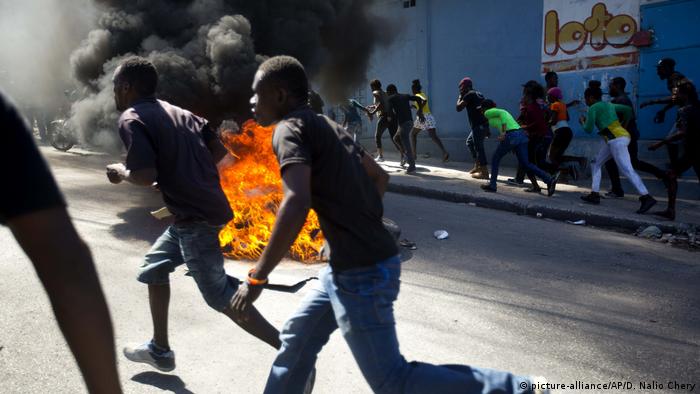 The World Hunger Index 2018 ranks the Caribbean state, which has been repeatedly hit by natural disasters and depends heavily on foreign aid, 113 out of 119 countries. According to the report published by Germany's Welthungerhilfe and Concern Worldwide, the politically unstable country has the "highest level of hunger in the Western hemisphere." According to the index, the food situation is "very serious." Between October 2018 and February 2019 more than 386,000 Haitians fell into the emergency food category, according to the Integrated Food Security Phase Classification initiative. The World Food Program states that half of the Haitian population is currently malnourished.

"Unlike the 2010 earthquake, the 2018 food crisis in the Caribbean state hardly occurred in international news," the study said, noting that only 503 online articles reported on this particular crisis.

Ethiopia, too, faced food shortages in 2018. More than 80 percent of the population makes a living by farming, a source of livelihood threatened time and again by droughts. Last year saw rain again after two dry years — in some regions, it was not enough rain, while others were flooded, which also destroyed harvests. 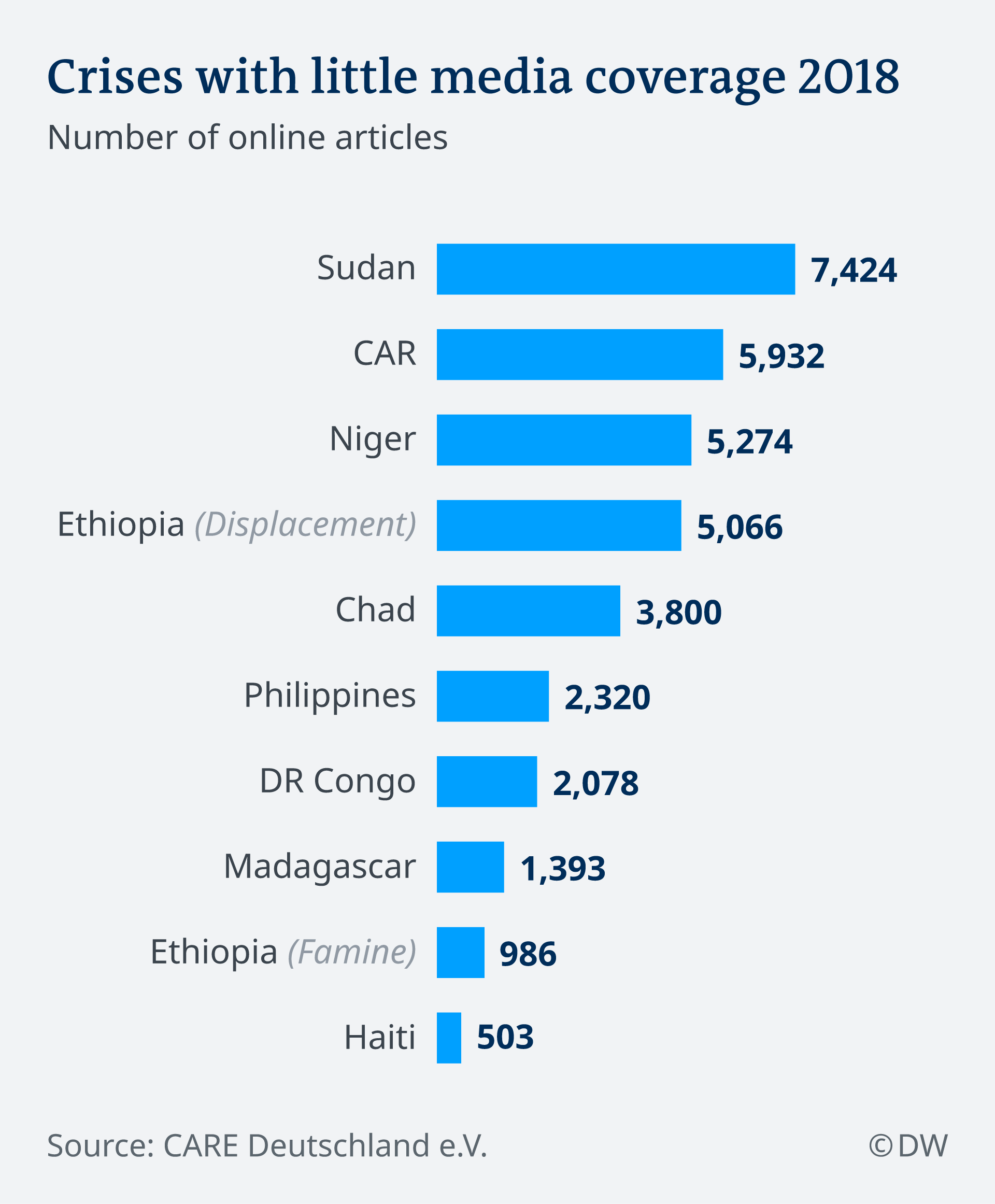 Ethiopia is listed twice in the Care study: Only 986 online articles reported about the food situation, and there were also few reports about the displacement of hundreds of thousands of people. According to the UN, about 1 million Ethiopians fled the Gedeo and West Guji regions between April and July due to ethnic violence — more internally displaced people than in any other country worldwide.

Last year, a series of destructive weather events wreaked havoc on the Southeast African island state. Madagascar is severely affected by climate change: The of El Nino climate phenomenon dried up the island's rice, corn and manioc fields and the tropical storms Ava and Eliakim forced more than 70,000 people to flee their homes. According to UN figures, the number of people threatened by hunger in the south of the country rose to 1.3 million because the poor weather conditions meant little grain could be produced. 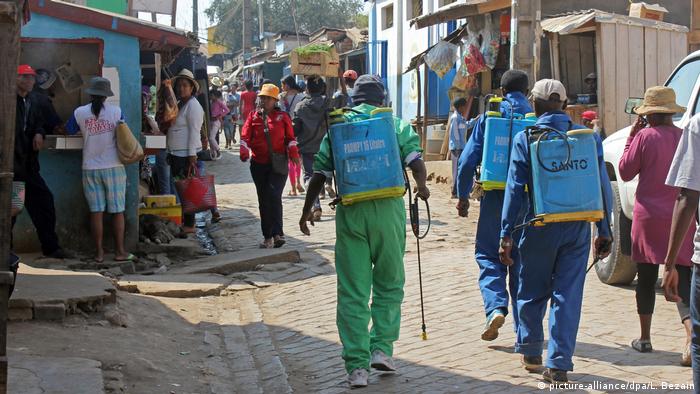 Madagascar has been hit with outbreaks of the plague

Outbreaks of disease, including measles and the plague, also shook Madagascar, just months after a plague epidemic claimed more than 200 lives in 2017. According to the World Health Organization (WHO), 6,500 measles cases were recorded in the capital, Antananarivo, by the end of December 2018. The low vaccination rate was the main driver of the outbreak.

There is a "vicious circle of violence, disease and malnutrition" in the Democratic Republic of Congo, according to the Care study. In 2018, 12.8 million people were threatened by hunger, 4.3 million children were malnourished, the country saw 500 new Ebola cases — 280 of which, according to the WHO, were lethal — and almost 765,000 people fled to neighboring states to escape militia violence, especially in the DRC's eastern provinces.

An above-average number of minors are also affected by the ongoing unrest. The DRC is one of the countries where children suffer most from armed conflict, according to a recent study by Save the Children and the Peace Research Institute Oslo. 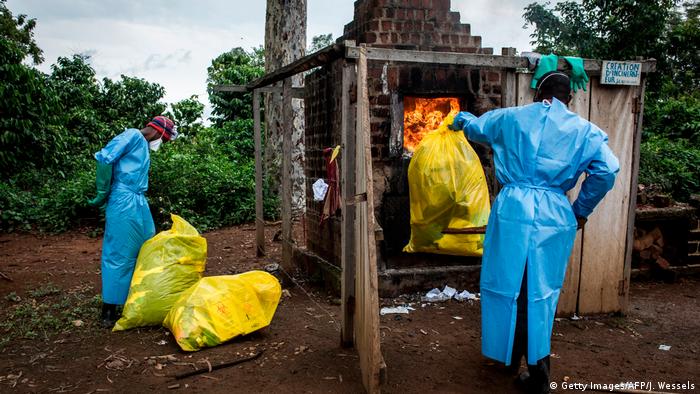 Rape as a weapon of war also continued in the DRC. The UN estimates a total of more than 200,000 rape victims in the former Belgian colony. Doctors without Borders treated 2,600 victims of sexual violence in the city of Kananga from May 2017 to September last year, 80 percent of whom said they were raped by armed men.

Even if the Nobel Peace Prize went to Congolese gynecologist Denis Mukwege last year, garnering more attention in the media for the problem of sexual violence in the DRC, the crises in the country are among the least noticed worldwide in 2018, Care says.

On September 14, 2018, the world watched as Hurricane Florence hit the US east coast in North Carolina. At the same time, about 14,000 kilometers (8,700 miles) away, an even stronger storm moved towards the Philippine island of Luzon. At 200 kilometers per hour, the strongest tropical cyclone of the year hit the island in the early morning hours of September 15. More than 3.8 million people were affected, 82 people were killed and 130 injured in the disaster — but according to Care, relatively little was heard about typhoon Mangkhut, which was followed just a month later by typhoon Yutu. 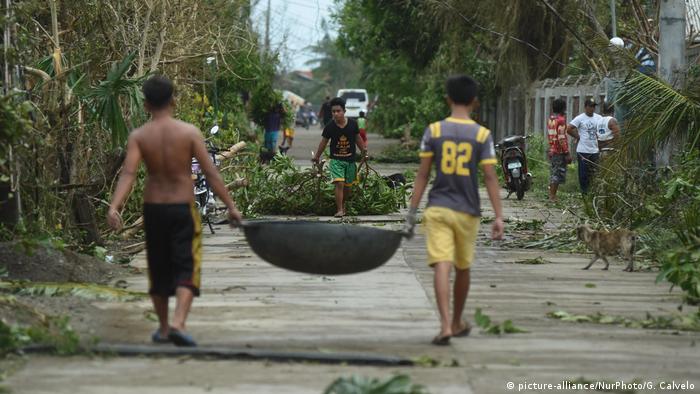 Typhoon Mangkhut caused widespread death and destruction in the Philippines

The Philippines is one of the countries most vulnerable to natural disasters in all of Asia, including earthquakes and volcanic eruptions: About 20 tropical storms hit the Western Pacific island state every year. According to the World Bank, the storms claim an average of 1,000 lives annually. But according to the Care study, the disastrous Mangkhut and Yutu typhoons are the country's 2018 invisible crises.