French protesters call for an end to police violence | Europe | News and current affairs from around the continent | DW | 25.06.2020

Calls for police reform sparked by the global Black Lives Matter movement have reached France. Researchers say that there is a long history of racism and violence in the police that goes back to the colonial era. 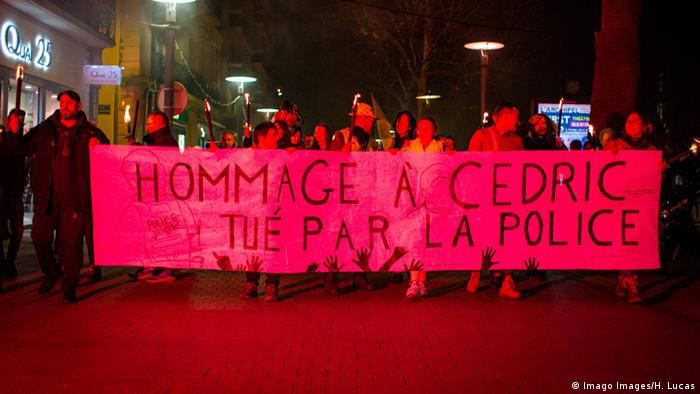 "I'm suffocating." Cedric Chouviat is thought to have said this at least seven times in less than a minute, as officers pinned him down on the ground in January 2020, not far from the Eiffel Tower in Paris.

The 42-year-old delivery driver had been stopped on his scooter. Police claim that he was looking at his mobile phone. Audio and video footage shows him talking to the officers before the situation escalates. Chouviat died two days after his arrest.

An autopsy found that he had died from asphyxia after his larynx had been fractured. 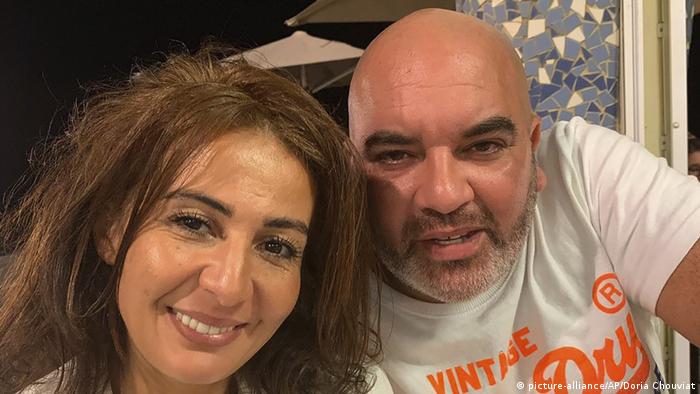 Cedric Chouviat, who died in police custody in Paris in January 2020, and his wife Doria

"France isn't the United States, but France is becoming like the United States,” said William Bourdon, one of the Chouviat family's lawyers, in a press statement. The family accused the officers of "murder" and called for their immediate suspension.

There is currently a manslaughter investigation into the case. One of the police officer's lawyers has said that Chouviat's words could not be heard because of the traffic noise.

This case bears some resemblance to the case of George Floyd, a black American killed by a police officer at the end of May in the US state of Minnesota. As he was dying, he repeated the words, "I can't breathe."

The whole scene was captured on video and has triggered mass protests against police violence and racism around the world, including France, where tens of thousands have demanded justice for victims of police violence such as Chouviat and also Adama Traore, a 24-year-old man who died in police custody in 2016.

His sister Assa Traore has repeatedly called for an investigation into the circumstances surrounding her brother's death. Various medical reports have drawn differing conclusions. One found that Adama Traore had died as a result of underlying health problems and a heart attack. Another found that his death was linked to the police methods used during his arrest.

Police violence in France is not new. There were a number of controversial incidents during the gilets jaunes (yellow vest) protests of 2018 and 2019. A number of protesters and journalists were seriously injured by the use of tear gas canisters, rubber bullets, stun grenades and flash-balls by police, with some losing limbs, others their sight. Videos of such incidents have circulated widely online.

France's Libération, a daily newspaper, documented 14 such cases. The independent journalist David Dufresne, who chronicles police violence, found that 25 people had lost an eye or their sight.

In 2019, the number of disciplinary proceedings against police officers accused of violence rose by 40%. However, there have been very few sentences for police officers.

The sociologist Fabien Jobard from the French National Centre for Scientific Research (CNRS) does not necessarily agree with the Chouviat family's lawyer, Bourdon, that France is "becoming like the United States," citing the fact that there are far fewer deaths in France than in the US. However, he concedes that there has been a rise in police violence over the past 30 years. He attributes this partly to the role of rival police unions, which wield enormous power and are fighting for hegemony. There is a belief among some that police who are seen to be tougher on the streets will win this competition.

Jobard explained that there had also been a militarization of the police force. "Patrol duty is conducted by police units that are heavily armed," he said. "[The units are armed] with weapons, such as rubber bullet guns, that in Germany are only used by special forces — for example if someone is taken hostage."

He said that in France routine stop and search checks and identity checks were often carried out by heavily-armed police officers and could easily escalate — more often than in Germany.

Racism goes back to colonial era

Often such checks are carried out against young men of color in France's less affluent districts.

"The youths feel that they are treated as second-class citizens and are subject to more checks than in other European countries," said Jobard, who warned that there was a potential for more violence as a result.

The militarization of the French police goes back to unrest in the outskirts of Paris that has erupted periodically since the mid-1990s. After a number of incidents in which it seemed that police officers were outnumbered, the government decided to provide officers with more riot gear but did not increase the number of police officers due to lack of funds.

However, there is a history of military methods in the French police. In a piece for UK newspaper The Guardian, the French social scientist and activist Mathieu Rigouste writes: "Throughout the colonial period, police agents and officers took their experiences from places such as Algeria and applied them to the policing of working-class neighborhoods and the quelling of insurrections in mainland France."

He continues to say that "manhunt, capture and strangulation techniques" used by police are "part of this long history." 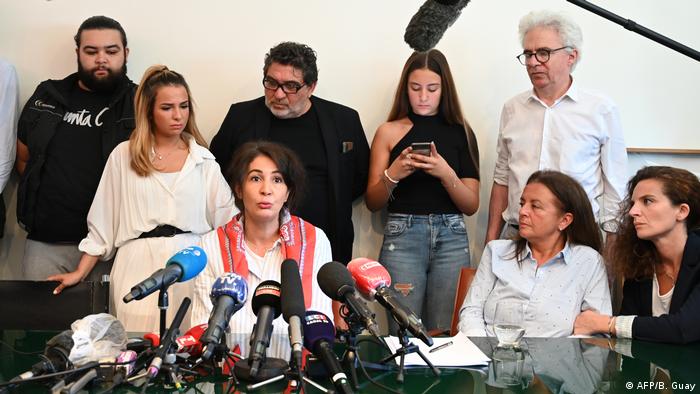 In March 2019, United Nations High Commissioner for Human Rights Michelle Bachelet called for a probe into the possible use of "excessive" violence by the police in France during the yellow vest protests.

The French government rejected accusations of excessive violence. "Do not speak of ‘repression' or ‘police violence'; such words are unacceptable in a state under the rule of law," said President Emmanuel Macron.

The recent Black Lives Matter protests have perhaps prompted a change of direction. Earlier this month, French Interior Minister Christophe Castaner declared "zero tolerance” policy for racism on the police force and promised that police officers would be systematically suspended from the force if there was suspicion of racism. He also said that the chokehold arrest would no longer be taught in police academies. Following huge protests from the police, however, Castaner retracted this promise.

For his part, Macron has said that the images and footage of violence are unacceptable and that he expects "very concrete" proposals from Castaner to improve the ethics of the police force.

Jobard doubts that such proposals will be effective. "I think that the problems are so deeply rooted in the police that at least one generation is needed to get the situation under control. We're talking about a whole police structure, police culture."

France: Thousands protest against bill to curb filming of police 21.11.2020

France's Macron under fire for political lurch to the right 30.11.2020