"The debates show us very clearly which way to go. We must cut taxes and cut them more quickly," Philippe said in Paris.

He added that French citizens had expressed "an enormous exasperation" over taxes, but said that the government would need to also cut public spending. 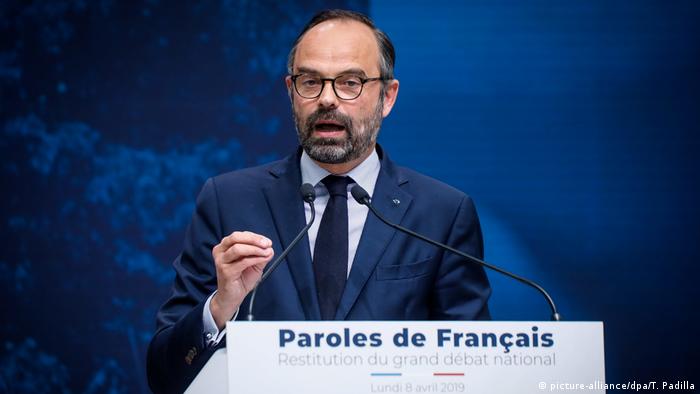 The "grand national debate" was launched by French President Emmanuel Macron in response to the nation's "yellow vest" movement. The debate involved more than 10,000 local meetings around the country and around 2 million online contributions. Macron spent roughly 100 hours at community events.

The French president is expected to announce new economic measures in a major speech next week.

Read more: Emmanuel Macron and the 'yellow vests:' Can they cooperate?

Since November, France has seen a series of protests, which have included riots and road blockages,by the "yellow vest" movement. Named for the yellow safety vest that must be carried in all cars in France by law, the largely leaderless movement initially protested against fuel tax hikes, but has evolved into a larger revolt against Macron's policies.

The main tax policy change so far by Macron, who was elected in 2017, was to scrap a wealth tax on high earners imposed by his predecessor Francois Hollande, and to introduce a flat tax rate of 30 percent on capital gains, dividends and interests. These policies prompted some to label the centrist a "president of the rich."