A woman taking part in protests against rising fuel prices in France has died after being hit by a car. The incident took place as activists angered by the government's tax hikes blocked motorways across the country. 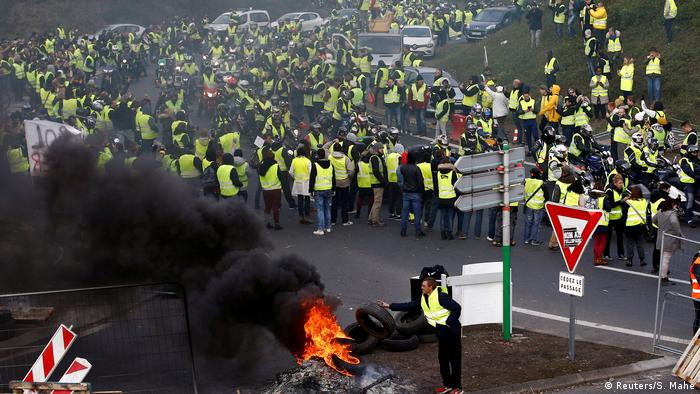 A motorist hit and killed a protester in southeastern France during Saturday's nationwide demonstrations against rising fuel prices, France's interior minister said. More than 400 people were injured, 14 of them seriously, while police made over 150 arrests.

In the southeastern town of Pont-de-Beauvoisin, a female driver panicked when she saw protesters barring the road and accelerated, hitting and killing a woman in her 50s, Interior Minister Christophe Castener said. 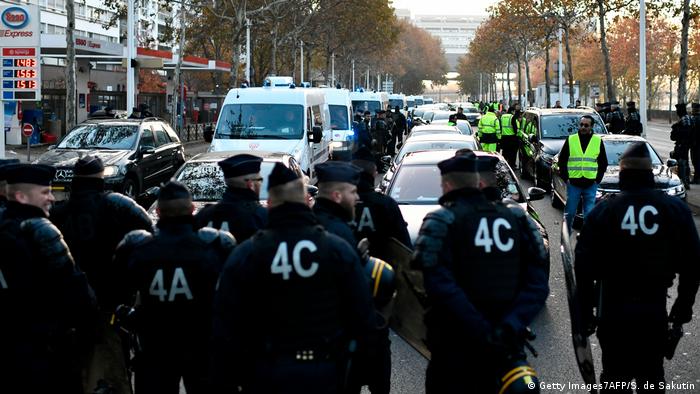 Castener told broadcaster RTL that around 288,000 people had taken part in the backlash against President Emmanuel Macron's fuel tax hikes at more than 2,000 locations.

The minister added that some activists continued their protest late into the night.

"Last night was restive... There were assaults, fights, stabbings," Castaner said. "There were fights among 'yellow vest' protesters. There was a lot of alcohol at certain venues, which led to this idiotic behavior."

The yellow vests are symbolic: they are required be kept inside all French vehicles in case the driver experiences difficulties.

Police were deployed across the country to keep some roadways clear. Footage posted on social media on Saturday evening showed officers dismantling obstructions.

While the "yellow-vest" movement's main focus is rising petrol and diesel tax, it has also attracted voters who are dissatisfied more generally with Macron's economic reforms.

Opposition parties and labor unions lent their backing to the protests, but were reluctant to join the blockades, citing the involvement of the far-right National Rally (Rassemblement National), previously the Front National.

Macron has rejected calls to scrap further tax rises in 2019. But, in an attempt to assuage protesters' concerns, the government last week announced it would offer energy subsidies and a grant of €4,000 ($4,600) for poorer families to replace older, less fuel-efficient vehicles.

The tax increases are part of an effort to move away from a reliance on fossil fuel-powered vehicles.

Macron's presidency: It's the economy, stupid!

Bill Clinton convinced voters with his simple message about jobs and job security. Now Emmanuel Macron, a pro-European centrist, has a new vision for businesses in France. What will he do for the economy? (08.05.2017)

The 19-member eurozone's second-largest economy has seen its GDP expanding at the fastest pace since 2011. Analysts said the country benefitted from reforms initiated by French President Emmanuel Macron. (30.01.2018)

French Prime Minister Manuel Valls has held emergency talks about the country's energy supplies as blockades continue at fuel depots. French workers have been striking against planned changes to the labor laws. (28.05.2016)

Macron marches to the future