Police have continued to patrol the western German city of Oberursel following the cancelation of the Eschborn-Frankfurt City loop bike race. The competition was called off over a suspected terrorist attack. 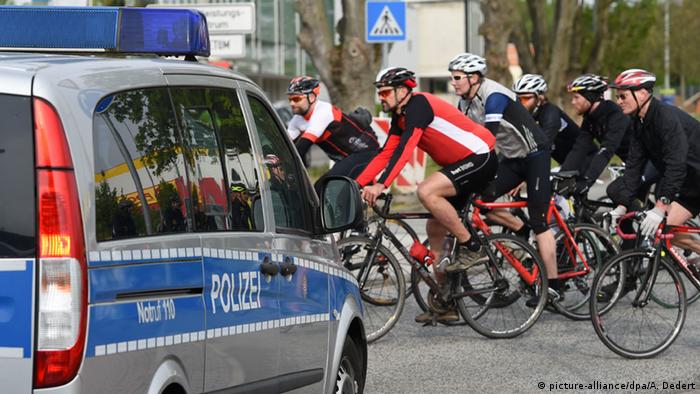 Authorities cancelled the event on Thursday after German police discovered that the race could have been the target of an Islamist terror attack. Two suspects, a 35-year-old German with a Turkish background and his 34-year-old wife, were arrestedin the early hours of Thursday morning on suspicion of planning the attack.

A spokesman for Hesse's State Office of Criminal Investigations said on Friday, however, that police were still securing the planned route.

"We have to know whether there are accomplices who are still operating or have already operated," the spokesperson said.

According to reports in the German paper, "Frankfurter Allgemeine Zeitung," a group of amateur cyclists still intended to ride the route.

Hopes for next year

Despite disappointment for hundreds of cyclist on the May bank holiday, the German Cyclists' Association (BDR) showed understanding for the cancellation, describing the decision as "regrettable but necessary due to security."

"Too bad that just a couple of people can ruin something which many had been looking forward to," said BDR President Rudolf Scharping.

Speaking at a press conference in Frankfurt on Friday, event organizer Bernd Moos-Achenbach said the race's existence was not in jeopardy.

"We're looking forward to 2016. We'll do our race again next year on May 1," Moos-Achenbach said

According to the state of Hesse's top public prosecutor, Albrecht Schreiber, an array of dangerous items were seized from the suspects' apartment on Thursday, including a completed pipe bomb, three liters of hydrogen peroxide, and "integral components of a G3 assault rifle."

The accused man is also reported to have close ties with the extremist scene in the Rhine-Main area in western Germany, including the Islamist Sauerland group. In 2012, four members of the group were convicted for planning terrorist attacks.

Amid growing fears of an attack in Germany, public events have remained on high alert in recent months. In January demonstrations by supporters and opponents of the PEGIDA movement in Dresden were canceled, as well as Braunschweig's annual Carnival Parade in February.

According to a newspaper report, Germany's General Terrorism Defense Center cannot respond to imminent threats as quickly at weekends as on weekdays. Security officials say the center is still capable of doing the job. (11.04.2015)