As well as a complete pipe bomb, police and prosecutors have said that they seized munitions, explosives, chemicals and firearms in a raid on a flat near Frankfurt. A cycling race has been called off as a precaution. 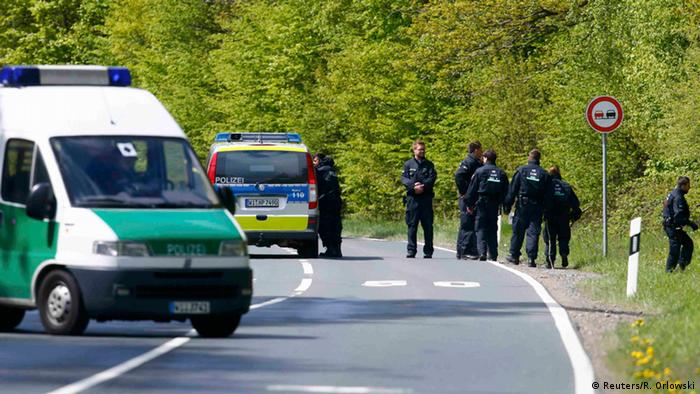 The western state of Hesse's top public prosecutor, Albrecht Schreiber, told reporters in Wiesbaden on Thursday that an array of dangerous items were seized from a couple's apartment overnight; the two suspects were arrested on suspicion of planning a terrorist attack.

The rifle was disassembled, Schreiber said, and police were working to ascertain whether the complete set of parts was present in the flat in Oberursel, near Frankfurt.

The overnight arrest of a 35-year-old German with Turkish roots and his 34-year-old wife is believed to have prevented a terrorist attack in the region. Friday's cycling race around Frankfurt had been identified as a potential target in the press; police president Stefan Müller said investigators had not ruled out the possibility, but did not yet know. 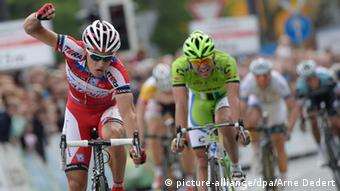 Although unconfirmed, indications suggest the suspects were targeting Friday's cycling race in Frankfurt

"That is, of course, a soft target, it would be relatively easy to attack," Müller said. "And since the Boston Marathon [attack of 2013], such events are closely watched - which also applies to cycling races."

Schreiber explained that the male suspect was seen in recent days surveying parts of the route of the cycling race, around Germany's financial capital on the Mayday public holiday. This intensified police attention on him.

The state's investigative police service, the Landeskriminalamt (LKA), announced on Thursday evening that the event would be called off as a precaution. The LKA said that although a connection was not a certainty, there were "clear overlaps between the course of the cycling race and the profiled movements of the arrested people."

"As a result of the currently still unresolved risk level, and the connection to the cycling race, this event must sadly be canceled for safety reasons," the LKA said in a statement.

Christian Knees, a cyclist for Team Sky and the German national team who was due to race for the German team in Friday's race, expressed his regret about the cancelation.

"Of course we are sad we can't race tomorrow, we really were looking forward to it," he told DW's Samantha Early. "Especially me as a German, riding for the national team here in Germany would be a big honor, but safety first. The police did a great job, and if there is any doubt about the safety it is the right call not to start the race tomorrow." 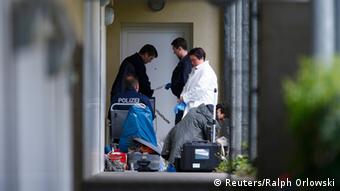 'We are watchful and on guard'

The suspects had been seen in a local hardware store purchasing the hydrogen peroxide, Schreiber said, adding that the wife's presence in the store was one of the reasons for her to be arrested along with her husband. Newspaper reports claim that the man is trained in chemistry.

Schreiber and Müller said it was too early to comment on reports that a conservative Islamic text was seized in the flat.

In Berlin, German Interior Minister Thomas de Maiziere called the arrests "proof of the effective work of our national and regional security services," saying it showed that "we are watchful and we are on guard."

Germany's national investigative police force, the BKA, said that it was supporting investigators' efforts, because of the suspicion that a terrorist attack was planned.

"Apparently, according to the police's knowledge of the case, a terrorist attack was thwarted by the arrests," Hesse's state minister for the interior, Peter Beuth, said in the regional parliament in Wiesbaden on Thursday. "Police and public prosecutors had been investigating for weeks. The raid took place overnight."

Beuth said that authorities suspected a Salafist background to the apparent plot, but offered no details on any possible target for an attack.