The French president has announced a funding campaign to rebuild Notre Dame after it was partially gutted in a fire. A crane and a delivery of timber have already arrived, with a view to starting the restoration quickly.

French President Emmanuel Macron committed on Tuesday to rebuilding Notre Dame Cathedral within five years after the Paris landmark was partially gutted in a devastating fire.

"We will rebuild Notre Dame even more beautifully and I want it to be completed in five years, we can do it," Macron said in a television address to the nation.

Describing Notre Dame as "the epicenter of our life," Macron had earlier announced that a fundraising campaign would begin Tuesday and called on the world's "greatest talents" to help rebuild the cathedral.

Building teams brought a large crane and planks of wood onto the site on Wednesday morning, with plans already in place to begin the reconstruction effort. 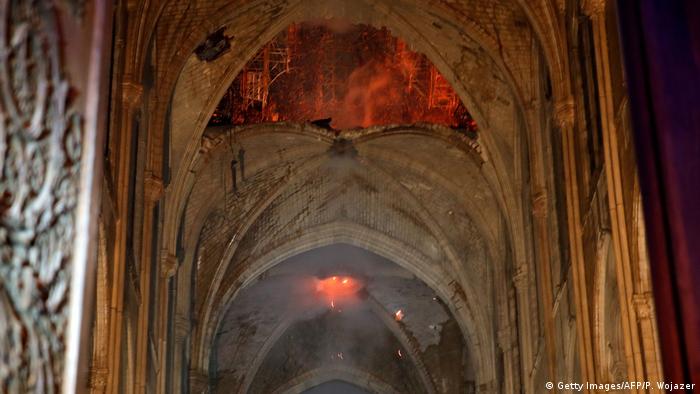 The CEO of the Kering group, which owns the Gucci and Yves Saint Laurent fashion houses, said the money would be paid by the Pinault family's investment firm, Artemis.

Later on Tuesday, a second French billionaire, Bernard Arnault of Christian Dior SE and the sprawling luxury goods empire LVMH, promised €200 million ($226 million) to the reconstruction efforts. That was followed by a €100-million pledge from French oil company Total.

German Foreign Minister Heiko Maas offered Berlin's support, saying the fire "struck at the heart of all of Europe."

"We offer France the assistance it desires," said Maas. "Specialists in Germany and France are already working together. All of Europe is with France today."

Peter Füssenich, the architect who led restoration work at Cologne's Dom Cathedral, said that "just by seeing the images on TV, you know that it will not just take years to deal with the damage, but that it's going to take decades."

Speaking outside the cathedral, Macron said the "the worst had been avoided" after firefighters managed to contain the fire following a collapse of the spire and the wooden roof structure went up in flames. Miraculously, only a small part of the vault appeared to have collapsed into the interior and firefighters were able to save valuable relics and pieces of art.

Paris fire brigade chief Jean-Claude Gallet said the main structure of Notre Dame had been saved and preserved, as well as the two rectangular towers at its facade. The fire service said the blaze had been fully extinguished on Tuesday morning.

Paris public prosecutor Remy Heitz on Tuesday said that an investigation into the causes would be "long and complex."

Laurent Nunez, state secretary in the Interior Ministry told French broadcaster BFM TV that the next step would be assessing how well the core structure had fared in the blaze and establishing if the building was stable. A group of architects and experts will be convened to decide how best to proceed.

After the Notre Dame fire, it took only a few hours for shock to give way to consolation and promises of a full restoration of the famous cathedral. Anything else would have been unimaginable, says DW's Rick Fulker. (16.04.2019)