Global leaders have expressed their solidarity with France in light of the tragedy. As the flames subsided, President Emmanuel Macron has vowed to rebuild the 800 year-old cathedral. 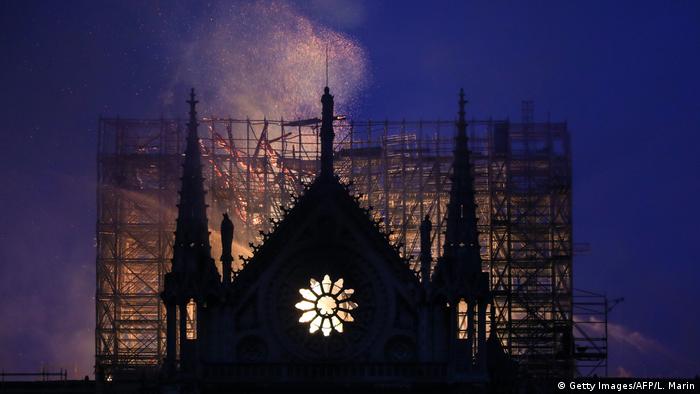 Leaders from around the world extended their grief and condolences into the early hours of Tuesday as France grappled with the severe damage done to one of its most beloved landmarks, Notre Dame cathedral.

German Chancellor Angela Merkel described Notre Dame as a "symbol of France and our European culture" and expressed solidarity with the French people.

Merkel's Foreign Minister Heiko Maas added that "our thoughts are with the relief workers and our French friends."

US President Donald Trump wrote on Twitter that it was "horrible to watch" footage of the burning building.

Iran's top diplomat Javad Zarif also expressed his sadness at the tragedy, highlighting how Victor Hugo's The Hunchback of Notre-Dame has captivated the public imagination and the cathedral's long history.

The Vatican said of the devastation to one of the world's most visible Catholic landmarks: "The Holy See has seen with shock and sadness the news of the terrible fire that has devastated the Cathedral of Notre Dame, symbol of Christianity in France and in the world."

European Council President Donald Tusk wrote in French that "Notre-Dame of Paris is Notre-Dame of all Europe. We are all with Paris today."

Former US President Barack Obama shared a photo of his family lighting a candle in the famous Gothic church, which he called "one of the world's great treasures."

The UK's Theresa May said that her "thoughts are with the people of France tonight and with the emergency services who are fighting the terrible blaze."

Hamid Karzai, the former President of Afghanistan, offered his sympathies as well. He likened the loss of cultural heritage to the destruction of the Buddhas of Bamyan, which were hit with dynamite by the Taliban in 2001:

Notre Dame began burning on Monday evening, causing the 12th-century steeple, which was undergoing renovation work, to completely collapse. Despite the extensive damage, French authorities said after the fire subsided that much of the structure, including its two rectangular towers, had been saved. French President Emmanuel Macron has promised to rebuild the cathedral and announced a funding campaign.

Investigators have said they suspect that the fire was likely caused by an accident, and was probably not a case of arson, perhaps sparked by the renovation work.

A human-shaped lead sarcophagus found beneath the floor at the fire-ravaged Notre Dame Cathedral in Paris has generated much speculation about its contents.