Authorities say the basic structure of the 12th-century cathedral, one of Europe's most visited landmarks, has been "saved and preserved." Investigators are looking into a link with renovation work being carried out. 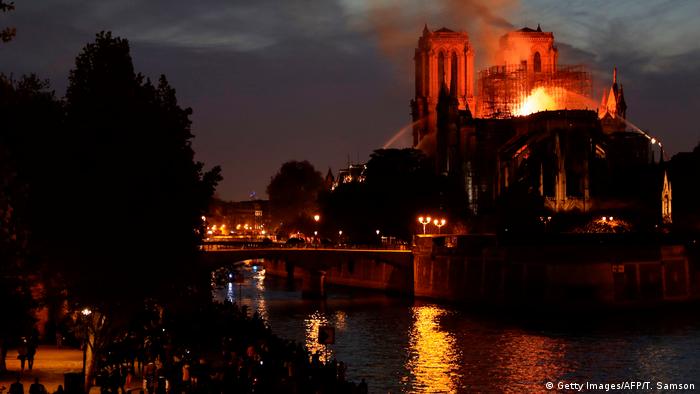 A monstrous fire engulfed Paris' iconic Notre Dame Cathedral on Monday evening, toppling its spire and causing extensive damage to one of the world's most historic and recognized buildings.

The 12th-century Gothic cathedral was undergoing renovation work, which local media cited as one potential cause for the fire.

French President Emmanuel Macron canceled a major speech and wrote on Twitter before arriving at the scene: "Our Lady of Paris is in flames. A whole nation is emotional. My thoughts are with all Catholics and all in France. Like all our compatriots, I'm sad this evening to see this part of us burning."

Macron spoke of the cathedral's huge cultural and historical value as he addressed reporters in front of the still-burning landmark. "Let's be proud, because we built this cathedral more than 800 years ago. We've built it and, throughout the centuries, let it grow and improved it. So I solemnly say tonight: We will rebuild it together."

He vowed to launch an international appeal for the restoration of the cathedral. The fire consumed a large part of Notre Dame's roof, which was covered in scaffolding as part of renovation works

The 12th-century building, immortalized in the novel The Hunchback of Notre Dame, was undergoing renovation work due to "deterioration of structural elements."

In 2012, the Archbishop of Paris and the Diocese of Paris founded "The Friends of Notre Dame" to raise funds to fight the problem, with renovation and repair efforts ongoing. Michel Picaud, president of the foundation, told France 24 in 2017 that the costs were "estimated at a total of €100 million."

"There is no part of the building untouched by the irreparable loss of sculptural and decorative elements, let alone the alarming deterioration of structural elements," said the foundation.

DW will continue updating this story as it develops.

For over 800 years, Notre Dame has been France's literal and metaphorical center. The Gothic treasure has served as the scene of important events in French history and a trove of priceless cultural heritage. (16.04.2019)

To mark its 850th anniversary, Notre Dame cathedral is ringing in Easter with newly minted bells. The tones of the bells at the iconic Paris landmark are reminiscent of the originals. (31.03.2013)