France's finance minister will bring forward legislation this week for a 3 percent tax on companies including Google and Facebook. Public anger about tax avoidance by digital giants has prompted the move. 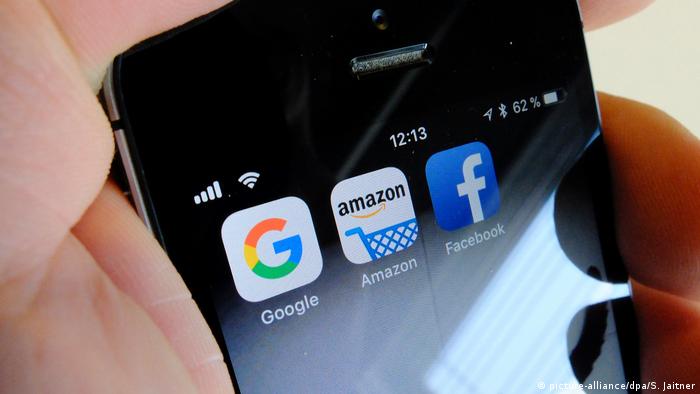 Around 30 companies will be affected by a tax on digital giants, French Finance Minister Bruno Le Maire said on Sunday.

Most of the companies subject to the proposed 3 percent tax will be American, but Chinese, German, Spanish, British and one French firm are also expected to have to pay it, Le Maire told Le Parisien newspaper.

Le Maire said the tax was a matter of "fiscal justice" aimed at companies with worldwide digital revenue of at least €750 million ($853 million) and French revenue of more than €25 million. The tax would yield French tax authorities some €500 million per year, he added.

The tax would apply to commissions that internet platforms charge on sales made through them, and to revenue from targeted advertising and the sale of user data — but not to direct internet sales to consumers.

That would mean Amazon earning money as a digital intermediary between a producer and a client would have to pay, but French electronics retailer, Darty, which sells directly to customers wouldn't.

The legislation is expected to be presented to the cabinet this week before it goes before parliament.

France has threatened to levy the tax in response to revelations that the tech giants make use of complicated tax avoidance schemes to reduce their obligations to individual EU states. Fairer taxes are also a key demand of the "yellow vest" protests seen across France in the past three months.

European Union-wide plans to tax the tech giants stumbled in December, due to the requirement for the proposals to be unanimously approved across the 28-member bloc. Germany is lukewarm to the idea, while member states with low corporate tax rates such as Luxembourg and Ireland firmly oppose the proposal.

The European Commission has estimated that traditional companies typically pay around 23 percent tax on profits, compared to between 8 and 9 percent for internet firms, some of which pay little or no tax at all.

In an interview with weekly Journal du Dimanche, Carrefour CEO Alexandre Bompard urged an end to the taxation imbalance between bricks-and-mortar firms like his and American and Chinese internet platforms.

"They pour their products onto markets without even paying value-added tax, and hardly any other tax at all, it is intolerable. On the same turnover they should pay the same tax," he said.

Consumer groups from across the bloc have signaled their plans to file formal complaints against the tech giant. Google has been accused of secretly tracking users' movements even after they try to disable such features. (27.11.2018)

The UK's finance minister has unveiled a new "digital services tax" targeting tech giants such as Google and Facebook. The minister also promised an end to public sector spending cuts. (30.10.2018)

US tech giants — such as Amazon, Google and Facebook — pay minimal taxes abroad, despite making billions in profits. African user countries no longer want to miss out on the revenue and are discussing digital taxes.