France promises to join US airstrikes against 'Islamic State'

French President Francois Hollande has agreed to join US-led aistrikes on "Islamic State" strongholds in Iraq. Meanwhile, a group of Kurdish Peshmerga are to be brought to Germany for military training. 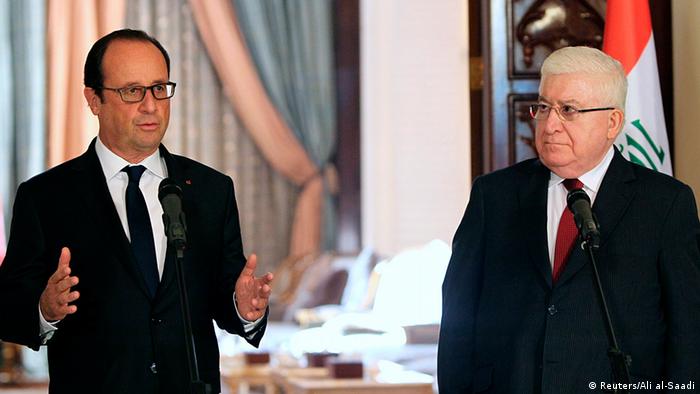 "The French president has promised me that his country will participate in the aerial effort against the Islamic State," Iraq's Prime Minister Haider al-Abadi said on Friday at a joint conference with Hollande in Baghdad.

Hollande also met Iraqi President Fouad Massoum and discussed military and humanitarian support for the Middle East country which is struggling to regain territories in its north and west from Islamic State (IS) militants.

"We will work with our allies for supporting Iraq in line with international law and legitimacy…We know the seriousness of the threat," said Hollande, although he did not exactly define how France would support the US airstrikes.

The French leader also emphasized that France was the first country to provide military aid to Iraq and was in the process of delivering its fourth shipment. Exact details are expected to be released at Monday's conference in Paris where Hollande intends to tackle the IS' financing and recruiting, improving border controls and training the Iraqi army.

Meanwhile, Germany announced that it would train around 30 Kurdish fighters in Bavaria this month. The fighters, also known as the Peshmerga, will learn how to operate German anti-rocket missiles, according to a German defense ministry spokesperson, speaking to Reuters news agency.

Berlin plans to deliver the weapons to Kurds fighting the IS in Iraq's north soon. Last week, they began delivering military equipment.

The German government also announced on Friday that it was stepping up its anti-IS efforts by banning all activities related to the jihadist group within Germany.

In the meantime, US Secretary of State John Kerry has managed to gain support from 10 Arab countries including Saudi Arabia, Lebanon and Egypt, who have pledged "to do their share" in the strikes against IS.

Kerry is currently in Ankara to garner Turkey's support in the fight against IS, an orthodox Muslim group of jihadists which aims to establish a caliphate on the basis of the Sharia law.

French President Francois Hollande has begun a one-day visit to Iraq. Hollande's visit came as his country's military was preparing for possible airstrikes on "Islamic State" militants in northern Iraq. (12.09.2014)