A German cargo plane carrying military equipment - but not weapons - has landed in Iraq to be delivered to Kurdish fighters. It remains unclear when the Kurds will receive the German guns they have been promised. 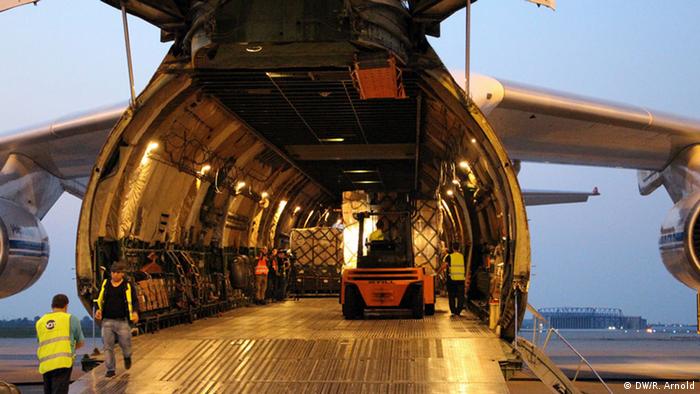 There were 70 tons of military equipment packed into boxes, attached to 22 pallets and wrapped in netting for the trip from Leipzig, Germany to Irbil, Iraq.

Lt. Col. Christoph von Löwenstern knows precisely what is in it: "On the pallets there is a total of 9,500 pieces of equipment, made up mostly of 4,000 ballistic vests, 4,000 helmets, 700 small radios and 680 night vision telescopes. Also included are materials for mine and munitions searches."

There were, however, no weapons on board. Much of the equipment is the same as what is used by the German armed forces and soon it will be in the hands of Kurdish fighters combating "Islamic State" militants in Iraq, von Löwenstern said.

Several forklifts lifted the bulky cargo into a giant Russian Antonov 124 cargo plane. The Antanov 124 is one of the largest cargo aircraft in the world and has the advantage of being lowered for loading and unloading and can open in both directions. The plane's engines produce a deafening roar while the nose and tail open so staff can load the supplies.

The cargo plane arrived on Friday in the northern Iraqi city of Irbil, the capital of the semi-autonomous Iraqi region of Kurdistan. The flight should only take five hours, but a stopover in Baghdad is required so Iraqi officials can check the plane's freight. The Bundeswehr's previous flights in August to the Kurdish regions of Iraq contained humanitarian aid and were not subject to searches. But Baghdad's authorities' distrust of the Kurds does not play a role in the extra security measures, according to von Löwenstern.

"The stopover in Baghdad is a normal process," he said. "The central government checks if the material listed by the German government is really on-board."

After being checked, the plane will continue its trip to northern Iraq. In Irbil, the supplies will be delivered to staff from the German General Consulate as representatives of the German Foreign Ministry. A German team on the ground in Irbil will then coordinate the transfer of goods to local governments. Records of who receives what equipment are kept to ensure the supplies reach their intended destination.

A team of six Bundeswehr soldiers in Irbil will oversee the distribution of equipment. But rather than just handing over the goods, the German officers will also train Kurdish fighters in their use. Training for more complex pieces of equipment will also partially take place in Germany.

In addition to the six officers in Iraq, more trainers could be sent to the country without requiring a parliamentary mandate. When the first German weapons are scheduled to arrive in Iraq remains unclear, though von Löwenstern said he does not expect that to happen before the end of September.

Kurdish journalist Zinar Shino is visibly relieved that aid deliveries have finally begun. He said he hopes that weapons for Kurdish fighters will also arrive soon. Germany decided at the end of August that it would provide weapons to Kurdish fighters.

"With the help of European countries, IS will certainly be stopped and pushed back," he said. "Our colleagues working on the ground and reporting have sent us many horrible images of what is happening there. The Kurdish troops as well as many Iraqi troops, need a lot of weapons to fight effectively against IS."

The German parliament has met in a special session to debate plans to ship weapons to Iraq. The opposition was critical of the shipments, warning that these arms could easily fall into the wrong hands. (02.09.2014)