French President Emmanuel Macron has paid tribute to the victims of a massacre at the offices of Charlie Hebdo three years ago. The killing spree in Paris was the first in a series of deadly Islamist assaults in France. 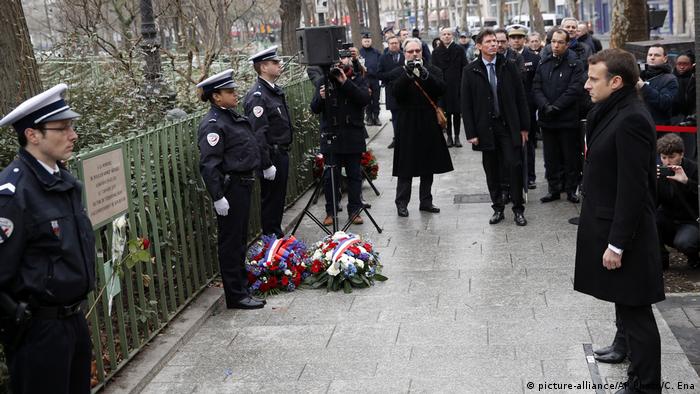 Emmanuel Macron laid a wreath outside the former premises of satirical weekly Charlie Hebdo on Sunday during a low-key ceremony to mark the attack's third anniversary.

On January 7, 2015, two jihadi gunmen stormed the building and opened fire on the magazine's staff, killing 11 people, including several prominent cartoonists and writers.

Paris Mayor Anne Hidalgo, members of her government and journalists from the magazine were in attendance as the names of the victims were read out.

Mourners also led tributes at a nearby site where a policeman was shot dead at point-blank range, as well as at a kosher supermarket where four other people were killed.

- Life after the Charlie Hebdo attack

- 'Charlie Hebdo' issues cover in solidarity with 'Spiegel' on Trump

- The year of terror in Europe

The Charlie Hebdo massacre was carried out by brothers Said and Cherif Kouachi, who were killed in a police shootout two days later.

A third attacker, Amedy Coulibaly, who staged the assault on the Jewish store, was also later slain by police.

The violence targeted at the staunchly provocative magazine shocked France and was the first in a series of jihadist attacks that have claimed dozens of lives in the country.

"The 7th of January 2015 propelled us into a new world of armed police, secure entrances and reinforced doors, of fear and death," Charlie Hebdo contributor Fabrice Nicolino wrote in the magazine's latest issue.

"And this in the heart of Paris and in conditions which do not honor the French republic. Do we still have a laugh? Yes," he added.

Vigils have begun around the world in tribute to the 12 victims who died in a shooting at the Paris headquarters of the French satirical magazine Charlie Hebdo. The gunmen are still on the run. (07.01.2015)