'Charlie Hebdo' issues cover in solidarity with 'Spiegel' on Trump

The German edition of satirical magazine 'Charlie Hebdo' has published a message of solidarity with magazine 'Der Spiegel' over its recent controversial Trump cover. 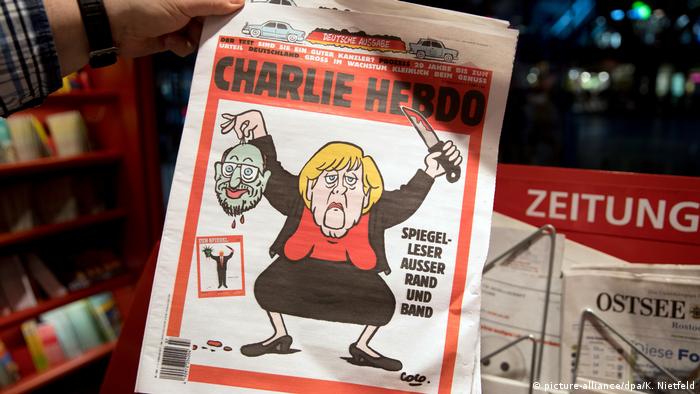 German Chancellor Angela Merkel is seen in the caricature holding a bloody knife in one hand and the separated head of the new leader of the Social Democrat Party (SPD) Martin Schulz in the other on the cover of this week's German edition of "Charlie Hebdo."

The editor-in-chief of the weekly "Der Spiegel" news magazine this week defended his magazine's front cover illustration of US President Donald Trump holding the severed head of the Statue of Liberty after widespread condemnation in the German and wider media.

In January, Schulz was officially chosen as the SPD's candidate for the Chancellery in September's parliamentary elections.

"This is a gesture of respect for our colleagues in Hamburg [a reference to Spiegel's editorial office in the northern German city]," the editor-in-chief of the German edition of "Charlie Hebdo" - using the pseudonym Minka Schneider - told the German news agency DPA on Wednesday, the day before the next issue was due to hit newsstands.

"What shocked us most was the negative response," Schneider said. "We think this cover is pretty good."

"We know the accusations about violating sound journalistic customs all too well," an editorial in this week's issue reads. "We are in the same boat, because at the center of this spat - in your case as in ours - is the debate about freedom of opinion and the way it which you use it. Or don't."

The German version of "Charlie Hebdo" hit German newsstands in late November. It is its first foreign-language edition and was started almost two years after its Paris staff was almost wiped out in a deadly jihadi attack.