German Chancellor Merkel and other European leaders have highlighted their shared defense potential on Bastille Day amid rifts with the US. Troops from 10 countries participated in the annual Paris parade. 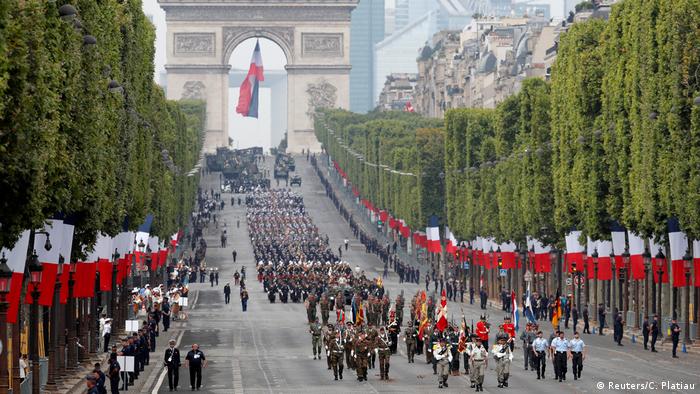 Troops from 10 countries took part in the European Intervention Initiative (EI2) and paraded down the Champs-Elysees. A total of 4,000 military personnel, 69 military airplanes and 39 helicopters were involved in the display.

Heads of state and government from Belgium, Estonia, Finland, the Netherlands and Portugal also joined Merkel and Macron in the reviewing stand.

Merkel walked with Macron to salute war veterans after the parade without incident. The chancellor had been seen to tremble at three official events in Berlin in recent weeks. Merkel celebrates her 65th birthday on Wednesday.

Macron wanted to showcase European military prowess at this year's national French celebration. European leaders are under pressure to boost their military ties amid growing rifts with Washington and Britain's looming exit from the European Union.

On Saturday, Macron had issued a statement heralding a new national military space force command from September. The president said space has become a "true national security issue" due to increased spending and interest in the area from the United States, India, China and Russia. 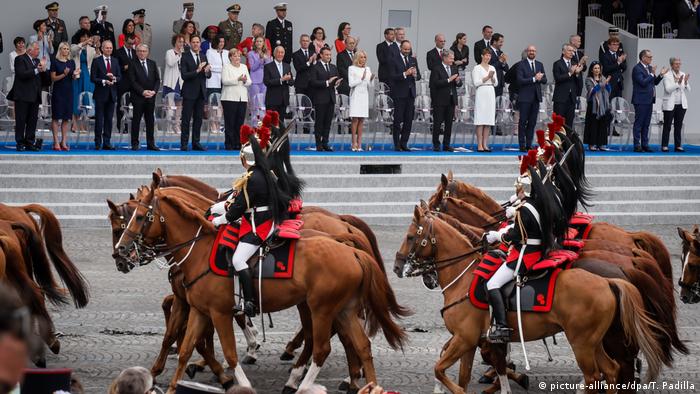 "Never since the end of World War II has Europe been so important," Macron said in a statement to mark July 14.

"The construction of a Europe of defense, in connection with the Atlantic alliance whose 70th anniversary we are celebrating, is a priority for France," the president added.

Macron said that the aim of the EI2 was to "act together and reinforce our capacity to act together," adding: "Our security and our defense pass through Europe."

Read more: Opinion: We must strengthen European defense together 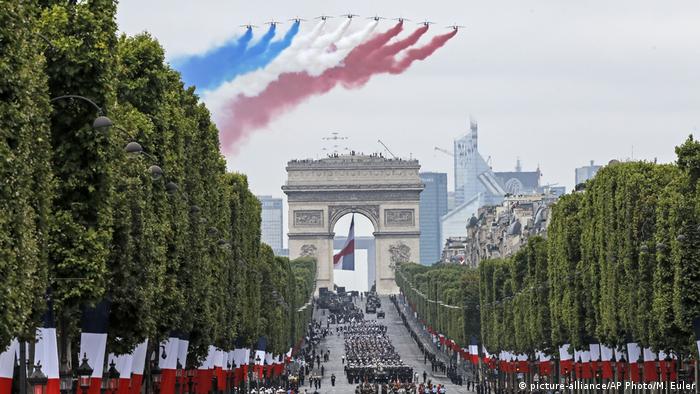 In November 2018, defense ministers from 10 European countries gathered in Paris to set the agenda for the EI2, which is spearheaded by President Macron.

"To face new threats, Europe needs a strong defense," the French Defense Ministry said in a tweet after the meeting. "With the European Intervention Initiative, 10 European countries are committed to its protection."

EI2's goal is to create a results-based common strategic culture that allows for rapid response joint military operations, including in humanitarian efforts. As such, it is not aimed at establishing a supranational European army. However, as an initiative outside EU and NATO frameworks, the French Defense Ministry has tried to alleviate concerns that it would undermine defense structures in the bloc and alliance.

Maas: 'We need a true European security and defense union'

"With the European Intervention Initiative, the whole European Union and the European pillar in NATO will also be strengthened," it added.

But France's efforts have done little to placate concerns in Berlin, which Paris sees as a pivotal actor in the initiative.

Claudia Major, senior international security associate at the Berlin-based German Institute for International and Security Affairs (SWP), told DW that German officials are wary because "it's explicitly and deliberately organized and set up outside the European Union's structures."

"For the Germans, making a deliberate attempt to set up something meaningful outside the EU's structures — and outside NATO — is not seen as a positive move but rather as undermining the EU," Major said.